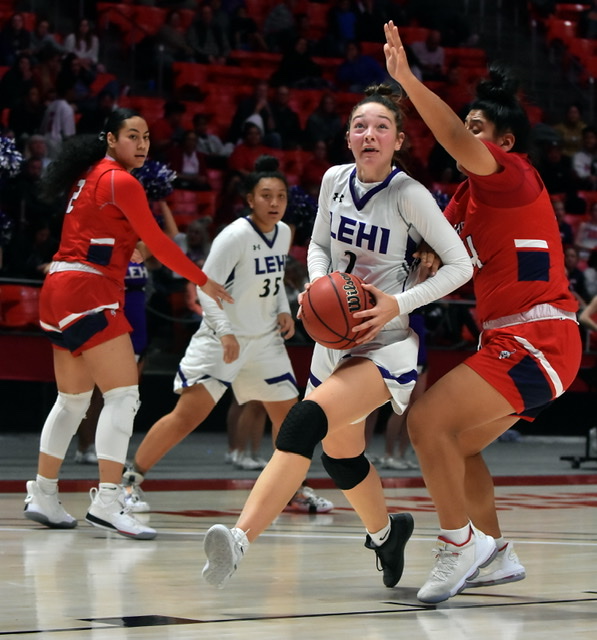 The Lady Pioneers hosted East High Tuesday night in a quarterfinal matchup in the State 5A Basketball Tournament and proved why they are an undefeated powerhouse in Utah girls basketball. East had a slow start to the season this year but rolled through region play during the second half of their season. Lehi knew they were going to face a battle heading into Tuesday’s quarterfinal matchup against the defending two-time state champions.

East started in a Triangle and 2 defense, designed to slow down Lehi’s dynamic duo in Macie and Maddie Warren. It took a few possessions for the Lady Pioneers to navigate this new defensive look, but they came in well prepared and started attacking the weak spots in the East zone.

Lehi’s defensive game plan worked perfectly as they held East to just three points in the first quarter while racking up 16 points on offense to take a big first-quarter lead.

The second quarter was much slower for both teams as East adjusted their defense to try and counter Lehi’s attack. East ended up outscoring the pioneers 9-6 in the quarter giving Lehi a 22-12 halftime advantage.

Lehi’s halftime adjustment found holes in the East defense and quick ball movement with some sharp shooting quickly pushed Lehi’s lead to 20 midway through the third quarter. At the end of the quarter, Lehi held a 39-22 lead.

Lehi continued their fierce defense, taking advantage of a spread-out defense to push the lead to 51-26 in the fourth quarter. As the final buzzer sounded, Lehi found themselves victorious yet again with a 53-30 victory.

With so much defensive focus on the Warren twins, the rest of the team had some great looks and stepped up and answered the call with double-digit scoring. Jamisyn Heaton led all scorers with 14 points followed by Lila Galeai with 13 and BrinlyWhiting with 10. Maddie Warren led the Pioneers in rebounding with nine boards and both Macie and Maddie each recorded four steals for the Pioneers.

Next up for the undefeated Pioneers is a semifinal matchup with Springville on Thursday at 3 p.m. at the Huntsman Center. UTA is offering free transportation to the University of Utah from local Frontrunner stations.