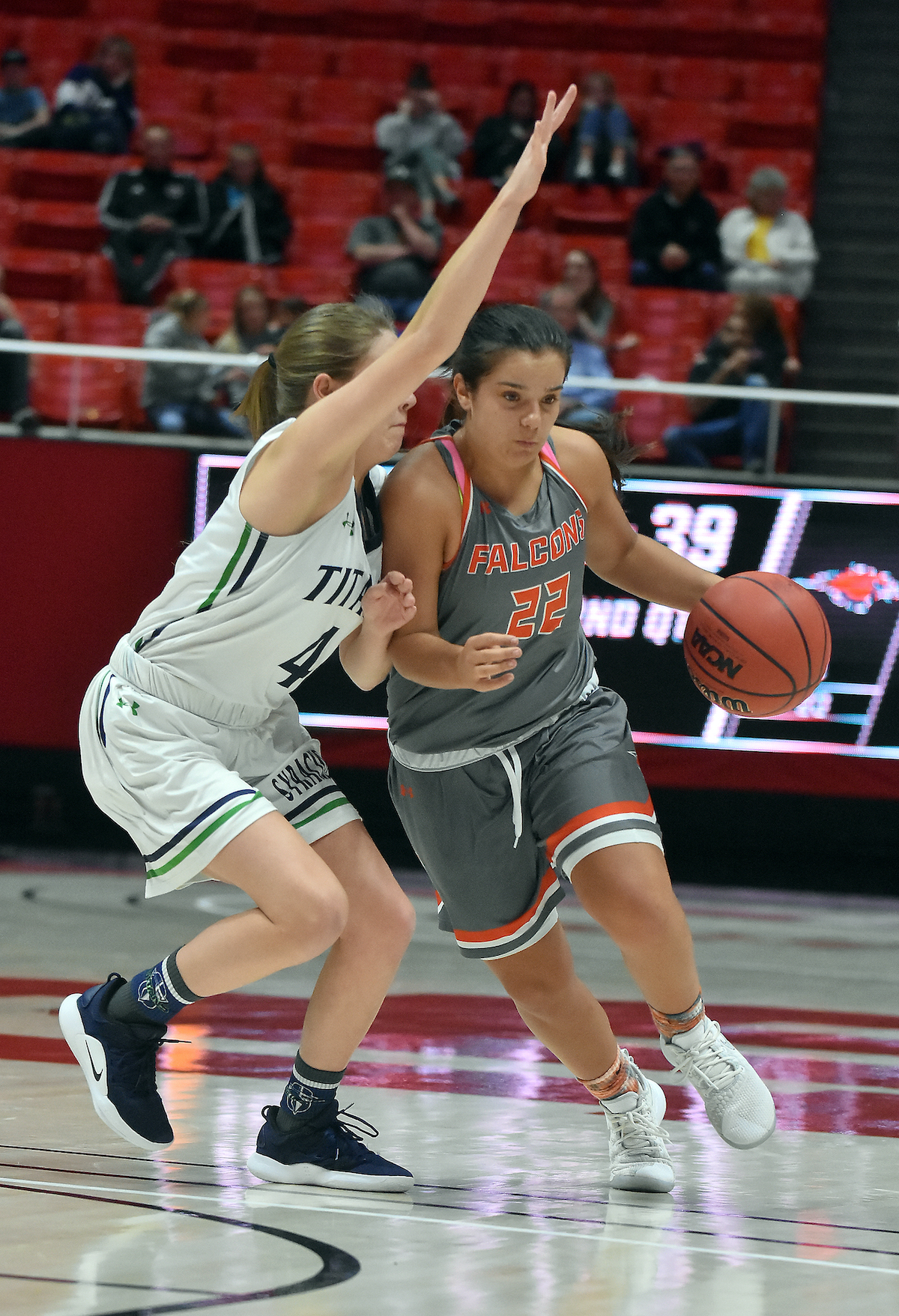 The Huntsman Center was abuzz Wednesday as the Skyridge girls basketball team arrived to take part in a full day of captivating state tournament action. Skyridge was slated to face the #4 seeded Syracuse Titans in a third-round matchup certain to test the Falcons’ mettle. Syracuse, with an impressive 12-2 in Region 1 play, boasted one of the best regular-season records in the state but were denied a Region title by the tournament favorite Fremont Silverwolves.

Syracuse reached the third round with a 52-41 win over American Fork while Skyridge advanced with a solid 53-42 victory over Hunter last Thursday. True to their name, the Titans featured a towering lineup averaging over six feet tall. 6’3” Titan center, Gracie Sorenson, is a shot-blocking machine around the basket. An undersized Skyridge squad would be challenged by the Titans’ height and ability to clog the lane.

The Falcons started the game on a 7-0 run and built a 14-7 lead in the first quarter doing what they do best–playing high-energy defense and hitting three-point shots. The ‘a’ and the ‘l’ on my keyboard are worn out from typing this name so much this season, but Ally Blackham once again led the charge for the Falcons with her crisp shooting and cat-like defense. Blackham finished the afternoon with 19 points. Skyridge continued their dominance in the second quarter as senior trio Kylee Holland, Keylee Melling, and Brooke Lundell delivered critical veteran leadership with smart defense and balanced scoring. Coming off an injury, senior Nala Fainga has been a welcome late-season addition for the Falcons, offering further dimension to the Skyridge offense and another tough rebounder on both ends of the floor. Providing fearless play against the Syracuse tall timber, Fainga’s 8 points and 6 rebounds loomed large in a game that was hard-fought in the trenches. The Falcons appeared to take a comfortable 25-12 lead into halftime, but this contest was far from over.

Like a phoenix from the ashes, the Titans burst out of halftime, staggering the Falcons with nine unanswered points. Junior Rachel Godfrey went on a tear for Syracuse, pouring in 14 second-half points and finishing with 18 in the game. Sophomore Whitney Sorensen added 10 points for the Titans. By the end of the third quarter, Syracuse had slashed the Skyridge lead to 5, at 33-28.

In the fourth quarter, the Titans tightened their defensive noose even further, denying every Falcon foray into the key. With three minutes left on the clock, Whitney Sorensen converted an old-fashioned 3-point play to give Syracuse their first lead of the game at 39-38. With the clock winding down to under a minute, Blackham put the Falcons back up by one with a difficult driving shot.

With 8 seconds left, looking for the final shot, the Titans attempted to feed the ball into white-hot Rachel Godfrey, but Blackham made a sensational leaping deflection to secure a steal and raced the length of the court to score and put the Falcons up by three as time expired. The elated Falcons celebrated an emotional 46-43 victory under the bright Huntsman Center lights.  Skyridge advanced to face #1 seed, Fremont, in the tournament semi-finals on Friday at 2 p.m. at the same venue.