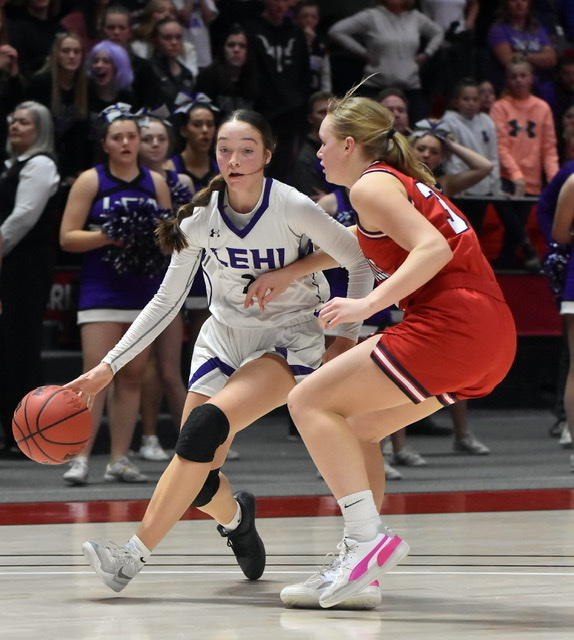 The Lehi Girls Basketball team came into Thursday’s semifinal matchup on a 23-game winning streak and the favorite to advance to the championship game on Saturday. They also knew that in Springville they would face a different type of opponent than they had all year. Springville’s size and slow pace of play (avg 46 ppg) was a strong contrast to the Lehi fast pace transition offense (avg 65 ppg). The pace of play would likely determine the winner of this game.

The first quarter started at an extremely slow pace and Springville found themselves up 8-4 before Macie Warren was able to knock down a deep 3 point shot to pull it to 8-7 after one quarter. That ended up being the only three-point shot the Pioneers would make as they went cold from deep throughout the rest of the game.

Lehi pulled ahead in the second quarter as they started attacking the paint on dribble drives and they were able to go into halftime with a slim 20-19 lead. The third quarter was much of the same as the lead for either side didn’t grow to more than 2 points most of the quarter. When Lehi was able to build a 3- or 4-point lead, Springville quickly answered with a long 3 point shot or by getting open looks near the rim. Lehi was able to outscore the Red Devils 10-9 in the third quarter led 30-28.

The back and forth scoring continued into the fourth quarter as Springville took a quick lead on a 3-point possession but Maddie Warren answered with a pair of free throws giving Lehi a 32-31 lead before Springville answered with another 3-point shot. Maddie was able to get a layup to tie the game at 34 with just over four minutes to go. Springville then scored 4 in a row followed by Lehi’s 4-0 run of their own on a jumper by Maddie and a turnaround jumper by Lila to tie the game at 38.

After another Springville bucket, Jamisyn Heaton scored a layup off a steal by Macie Warren to tie it at 40 with two minutes left. Springville used a layup and 2 free throws to build a 4-point lead before Maddie Warren cut it to 2 with 40 seconds to go.

On the next possession, Lehi stole the ball but then turned the ball over before they could get a shot to tie or win the game. Springville held on to win 48-44 in a heartbreaker for the Pioneers.

Leading scorers for Lehi were Maddie Warren with 18 points and Macie Warren with 13 points. Lehi finished a season 23-1 and secured their second Region Championship in a row. This is the third season in a row the Lady Pioneers have been ousted from the State Tournament in the semi-finals. Congratulations on a wonderful season Lehi!