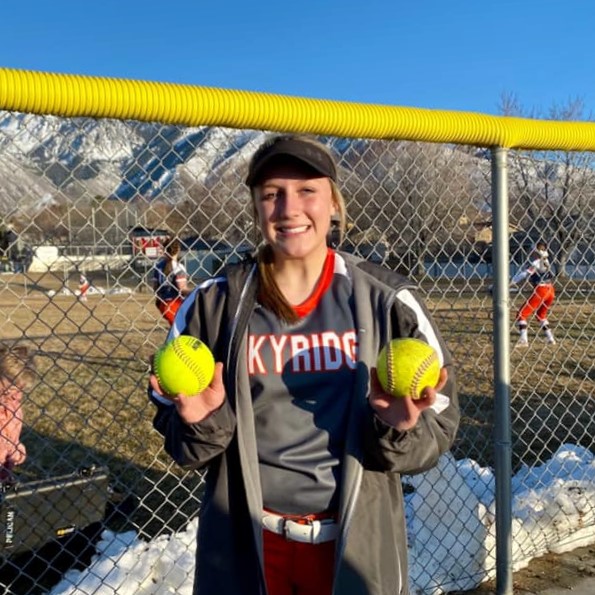 The Skyridge women’s softball team played their season openers last week with a win and a loss. The Falcons played at Alta High School in the initial contest on Tuesday. This game included additional drama off the field with a family rivalry as the Falcon’s head coach Riley White and the Hawk’s head coach Carley (White) Campbell are siblings.

The Alta Hawks initially took the lead and held the Falcons scoreless into the third inning. McKenzie Evans from Alta struck out five of the six initial Falcon batters. On offense, the Hawks were able to score a couple of runs off a bunt coupled with a dropped ball error in left field.

In the 3rd inning Skyridge got cooking when Keylee Melling got on base from a wild pitch and then Brightyn Turner hit a homer over the fence scoring two runs to even up the game at 2-2. Alta answered back though in the bottom of the third scoring two more runs from short hits and aggressive base running to increase their lead to 4-2.

Momentum shifted in the fourth inning Elliott Plewe, a starting freshman with Skyridge, singled on a hard ground ball to short, scoring one run. Then, Mokie Maughan also a freshman, doubled on a full count scoring two additional runs giving Skyridge their first lead, 5-4. The two freshmen players with their first start in a varsity game made a big impact.

Alta made a pitching change to give relief to Evans, but the floodgates were open, and the Falcons started pouring on the damage, scoring 8 runs in the fourth, and 5 runs in the fifth. Brightyn Turner ended up having another home run while Alexis Atcitty pitched the entire game and allowed no walks. The Skyridge Falcons won the game 15-5.

On Thursday, Skyridge had a second away game versus the Spanish Fork Dons. The game was held at the Spanish Fork Sports complex on the same field the Falcons ended their 2019 season. Perfect spring weather made for a warm game. Falcon Marne Freeman was injured,  forcing a lineup change. Hunter Bringhurst filled in at second, while Rachel Billings swapped to catcher.

The Dons struggled initially walking the first three batters and Skyridge took advantage scoring one run from a single by Alexis Atcitty. Spanish Fork recovered when Trinity Benson made an amazing throw from center field to catch Hunter Bringhurst stealing home. On offense, the Dons started with a short game with leading bunts and sacrifices that Skyridge struggled to field. The short game paid off and gave the lead to the Dons at 4-1.

Skyridge was able to tie up the game several times at 4 and at 6, but each time, Spanish Fork would return to the short game to load up the bases. Oakley Bates, the catcher for Spanish Fork, homered scoring multiple runs. Both teams were hitting well with Reece Tahbo and Alexis Atcitty collecting multiple hits while Brightyn Turner homered making her third for the season. In the end though, Spanish Fork walked away with a hard fought 10-7 victory.

The next game for the Falcons will be Tuesday March 10, at Springville High School followed by a spring tournament in St. George on Friday and Saturday.