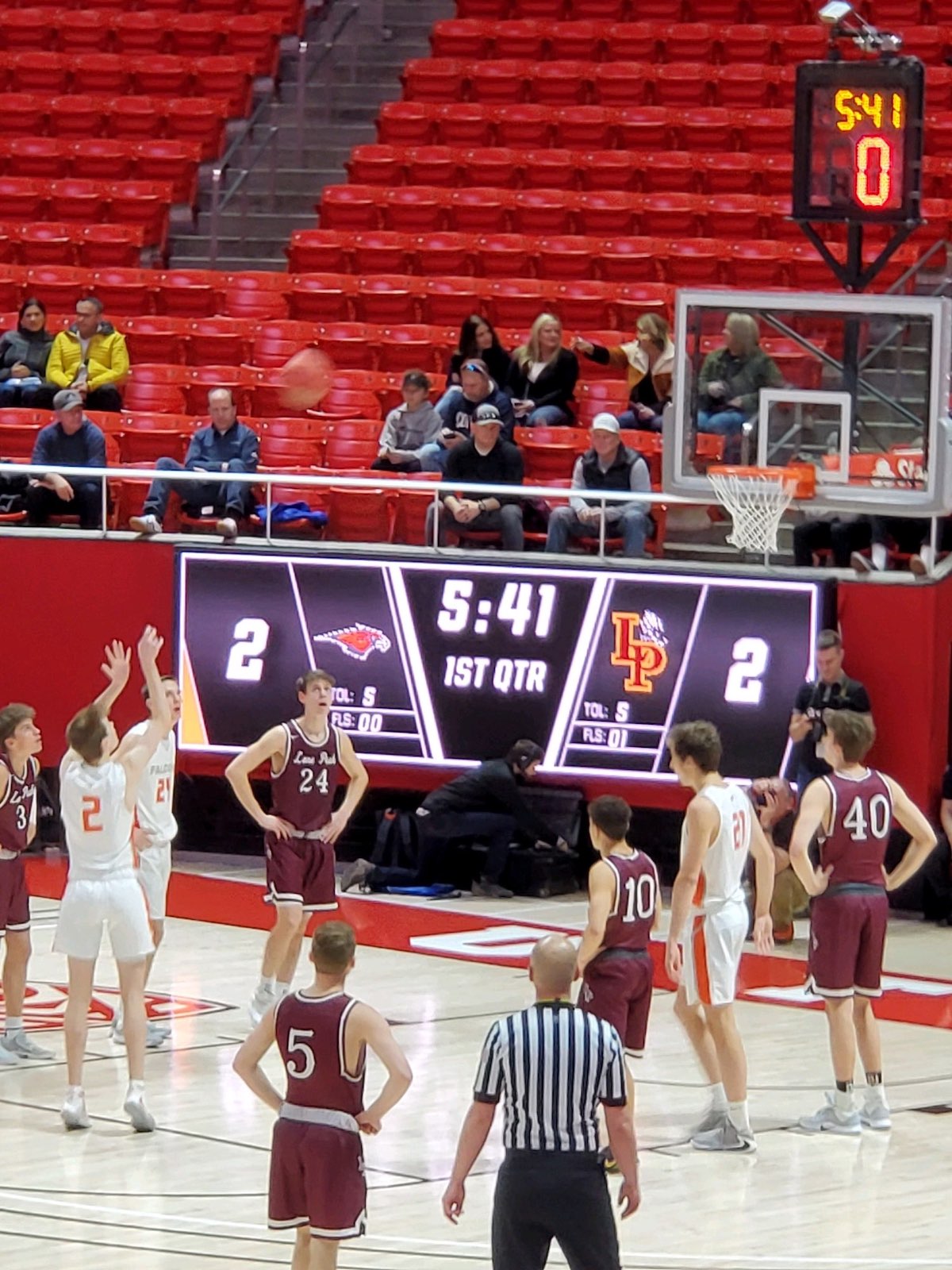 Skyridge’s boys basketball team trailed by double digits for most of the game but closed strong before losing a heartbreaker to Lone Peak, 74-73, in the 6A state tournament quarterfinals.

The teams faced off in the University of Utah’s Huntsman Center on Wednesday, Feb. 26.

Skyridge came into the second quarter with ramped-up intensity and a more measured tempo. The Falcons rebounded well on both ends, drawing fouls in the key and not allowing a Lone Peak bucket for the first five minutes of the quarter. Back-to-back 3-pointers from Lone Peak’s Jared Jensen put the Falcons down by 16, but Skyridge’s Trevon Snoddy drew a foul and made both free throws, and teammate Braden Housley dropped in a 3-pointer to bring the Falcons to within 11 at the close of the half, 35-24.

The Falcons opened the second half by taking control on defense, drawing fouls and getting to the free-throw line, but their offense looked a little sloppy in the opening minutes of the third quarter. A charging foul on Skyridge, followed by a bumbled inbound pass, resulted in two quick turnovers for the Falcons and four points for the Knights. Snoddy took command of the Falcon offense with a pretty 2-point shot, Nick Holland added a 3-pointer, and Kai Roberts’ fast-break bucket woke up the crowd. The Knights couldn’t miss at the foul line, though, and the third quarter ended with Lone Peak still ahead, 54-41.

The final quarter started with a Lone Peak turnover, Braden Housley drawing a foul and making one of two free throws. The Skyridge defense was tight and the momentum of the game noticeably shifted toward the Falcons in the fourth quarter. Two Lone Peak turnovers in a row led to four quick points for Skyridge and the student section in the Huntsman Center was on their feet. With under three minutes left in the game, the Falcons were within two points. The teams traded turns at the foul line and Skyridge’s poor free-throw percentage ended up hurting them.

Housley’s epic 3-pointer with 24.7 seconds left on the clock brought Skyridge within striking distance. Lone Peak’s Jared Jensen was cool at the free throw line, draining two with seconds left. Snoddy answered with a 3-pointer just before the buzzer to pull the Falcons within one. Before Lone Peak could celebrate, though, the officials met mid-court to discuss time on the clock. They added .5 seconds to the game clock and the Falcons had one slim chance to get a shot off, but the inbound pass was deflected, and Lone Peak advanced to the semifinals. Skyridge scored 30 points in the fourth quarter, but it wasn’t enough.

Snoddy led the Falcons with 31 points and 13 rebounds, while Housley scored 22 and Duncan Reid 12. Cameron Brimhall led the Knights with 26 points, while Jensen contributed 21 and Corbin Zentner 12.