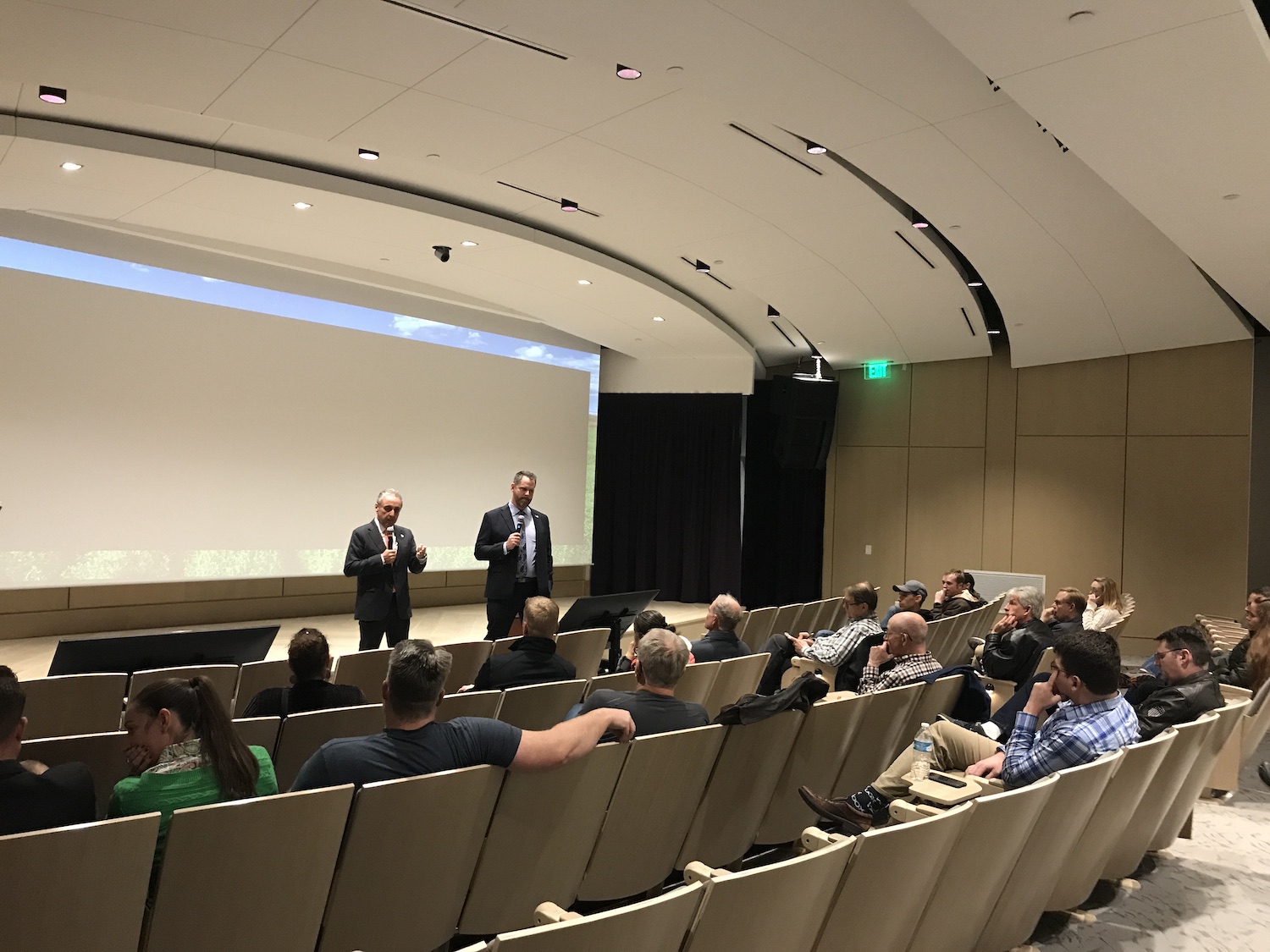 On Tuesday, February 25, 2020, Cory Maloy – Republican House District 6, and Jacob Anderegg – Republican Senate District 13, held a town hall meeting at the Young Living building in Lehi. Maloy and Anderegg addressed the group of about 25 people, each giving an introduction of bills they are currently working on and ways they are addressing issues during this year’s legislative session.

Anderegg began by talking about the upcoming agenda and bills that have been voted for and repealed, such as the tax reform bill. He gave an overview of the senate district he represents, which covers a very large area, most of which is Lehi.

“I have the fastest-growing district in the state. Last year, I had about 51 thousand constituents added to my senate district, and currently have around 170 thousand. Currently, Utah is adding about 80,000 people to the state per year.”

Anderegg said to expect redistricting after the census, in 2021, to make each senate district covers around 125 thousand people. Growth was an area of concern for some in attendance, with one constituent suggesting placing restrictions on how many people can sell land. Anderegg replied “Lehi is growing, Utah is growing. We need to make plans that are proactive and find the best ways to deal with that growth without restricting the constitutional rights of landowners.”

Cory Malloy introduced himself and spoke about legislation he believes will impact constituents. “We are trying to do everything we can to manage the money that comes in from the taxpayer, but also looking to where we can make cuts. The budget is going to be very low this year, so there are a lot of things that are not going to get paid for. I think it’s good that we’re in a situation where we have to be managing the taxpayer’s money very carefully.”

Anderegg and Maloy then took questions and comments from those in attendance. One constituent at the meeting asked, “Clean air is important. Are there things that you are working on to improve the air quality in the state?”

Anderegg said “I have a bill right now that will help in the long term. I’m sponsoring a bill right now, SB92, that looks into what can be done to make Frontrunner more sustainable to renewable, to maybe electrified. This is all a study and a plan for what we can do. I’ve brought in technical expertise from Europe and from Asia to show us how they’ve done their systems. We are looking into newer technology and systems to make transit work better.”

Anderegg is the sponsor of a bill relating to a state-wide comprehensive rail plan, SB92, for public transit, freight, and any other use of fixed rail.

“It makes no sense to throw good money after bad” continued Anderegg. “If UTA isn’t going to make improvements, like the double-tracking improvements for through-put, it’s really hard to make the investments in transit. Right now, we are subsidizing [UTA] to a ridiculous level, about 85 percent, and only collecting about 15 percent at the fair box. The large reason we haven’t had greater participation is because of reliability, dependability, frequency, and access.”

Maloy said that he fully supports these efforts and other clean energy efforts, saying “I’m working on helping make it easier for electric vehicle owners to not pay so many fines and fees related to emissions when there are no emissions from their vehicles.”

Many in the audience about why they do not use public transit, most said they would have to make multiple connections on busses that are unreliable. Anderegg said “This is what’s known as the ‘the last mile,” and it’s a real issue and we are looking into ways to improve that. Whether that’s public transportation or private businesses.”

Responding to questions about the tax reform bill, Anderegg and Maloy addressed the need to correct the imbalance between income tax and sales tax. Maloy said “Especially in light of the tax reform, that was a big deal for the people of Utah and the legislature. Now we are looking at how we can move forward and best manage the money and solve some of the issues the state has at the same time.”

Anderegg agreed, saying that reform is needed and referenced last year’s failed tax reform. “That would have been a good way for us to collect the necessary funds, but ultimately the people of Utah said that wasn’t what they wanted. So now we are looking into ways to do it better.”

In closing, both Anderegg and Maloy said that they are hoping to hear from their constituents, especially regarding tax reform. Anderegg said “I have never ducked a constituent. Let me know what you think. I try to always do what’s best for my constituents and the state.”

Governor Herbert calls for Utahns to avoid gatherings of 100+