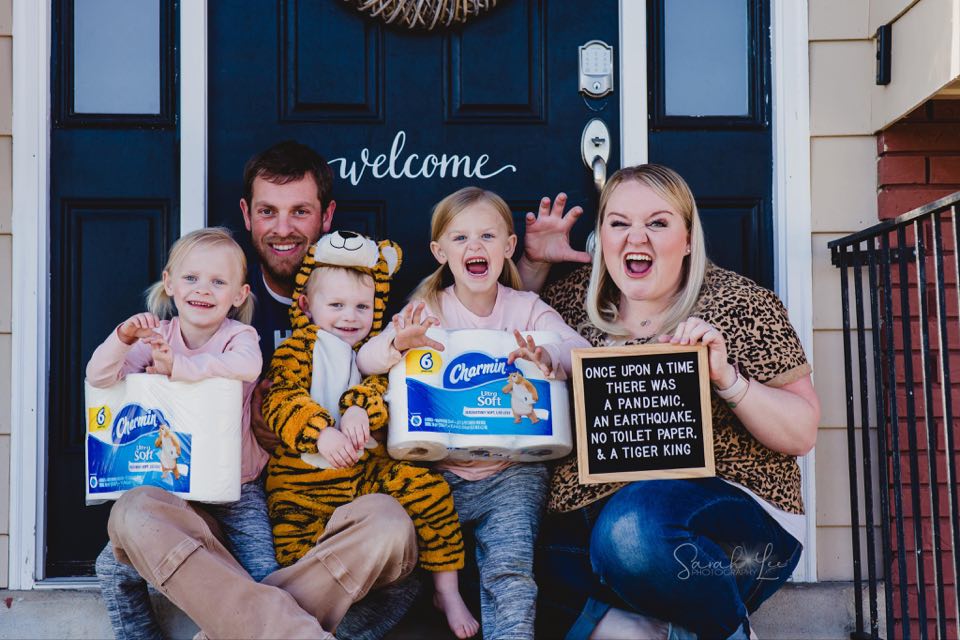 Her twin daughters are holding toilet paper. Her son is dressed up in a lion costume. And Zimmer, who is clawing at the camera, is holding a sign that says “once upon a time there was a pandemic. An earthquake. No toilet paper. And a tiger king.”

The photos were taken by Sarah Rogers, a Lehi photographer who is one of many nationwide participating in the Front Porch Project, an initiative to document family life amidst COVID-19.

“It has been worth it, financially and emotionally, just to see people smiling,” Rogers said. “It is giving both of us something to put on our schedule.”

The photos are taken either from cars, sidewalks or driveways and include families posing on their front porches, sometimes in costumes, sometimes with props and sometimes with letter boards making jokes about social distancing. The project has gained popularity across the country as COVID-19 ushers in tough times for photographers as weddings and other events have been delayed and people have put off taking family, engagement or senior photos.

“Event wise, there is nothing out there,” Rogers said.

Rogers, a lifestyle photographer, owns Sarah Lee Memories. After her husband became unemployed because of COVID-19, she said she decided to make lemonade with lemons.

“When he lost his job, I cried for three days straight, and then I thought, this might not be a bad thing,” Rogers said. “This may let me take my photography to the next level.”

A friend suggested she join in on the Front Porch Project, which has quickly spread across social media.

Rogers shows up to a photoshoot wearing a face mask and holding a longer lens so she can keep distance between her and the families.

Some clients dress up for the photos, while others are leaning into the situation with jokes about “Tiger King” or being trapped with their kids. One family’s photo featured a man with heart problems who held a sign that said, “be a hero, stay home.” Other photos online show teenagers in prom dresses they were never able to wear.

Rogers said the situation shows that everyone is trying their best — even if they never expected quarantine photoshoots to become a thing.

For Zimmer, COVID-19 has included staying home and explaining to her three children that they can’t hug friends or play at parks because “the world is sick.”

The photos, she said, are a way to make sure they can remember the fun times they had at home, instead of the stress.

“I think that right now we are in a really weird time, and I think it’s a good idea to have something to commemorate that,” Zimmer said. “I’m a nurse, so I am still working, so for us, it was a way to commemorate that without crossing that six-foot social distance line.”

Some of her clients will come outside in what they’ve been like in their homes, whether that’s setting up board games on porch steps, little girls dressed up in princess dresses or a businessman who’s been wearing a nice shirt on top and pajama pants below.

“It captures the raw of what’s going on right now,” Shipp said.

After she arrives at a home, she’ll text the family to let them know she’s arrived, will direct them into poses and is conscious to keep more than six feet between her and the clients at all times. The short sessions are done in 10 to 15 minutes.

She’s gotten continuous interest as clients have recommended the photos to their friends. On April 11 alone she had 14 sessions booked.

“I didn’t expect this to be a ripple effect,” Shipp said.

In a hard time, Shipp said the family portraits have given families something to put on their calendars and get dressed for.

“People are looking for something to do, and so this might be a good way to document what’s happening, and it captures their personalities,” she said. “They can come out and laugh about it.”

These photoshoots are less stressful than normal family portrait sessions when parents are trying to make children sit still and smile at the camera.

“No one was crying, everything was perfect,” she said. “Everyone was excited to be outside and smile for a few minutes.”

Lehi Round-up “up in the air”