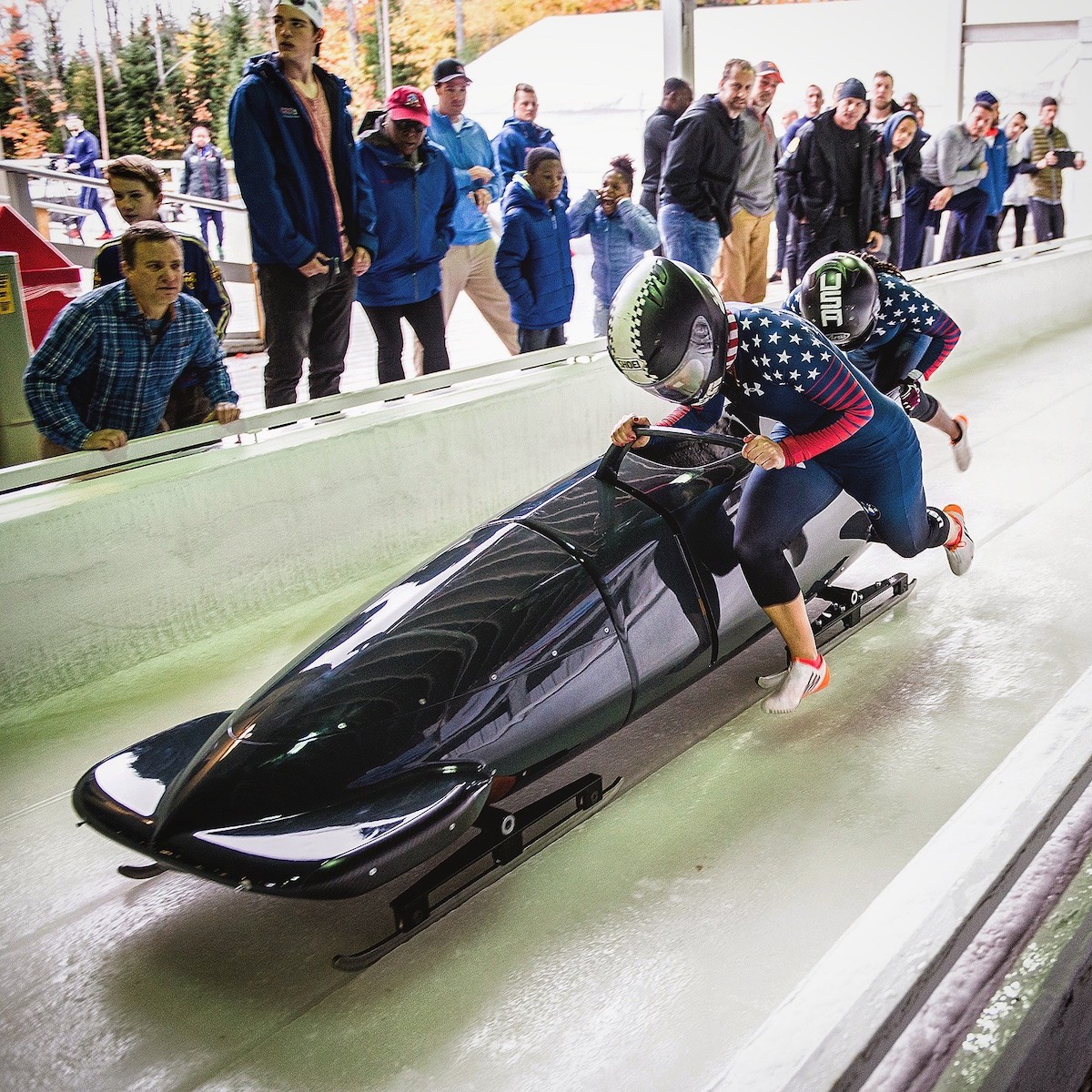 The USA Bob Sled Team hasn’t been able to practice together or work out in a regular gym for more than a month, so Grubhub offered a $100 gift card to the athlete whose workout video got the most likes on Instagram. Team members recorded themselves lifting cement buckets, bouncing babies, and pushing vehicles, but it was Kristi Koplin’s videos of herself wearing a giant T-rex costume while lifting weights and running that took the prize.

“I wore the costume as a joke when I was quarantined and working out, like it was a hazmat suit. The videos made my teammates and family laugh, so I had to use them for the Grubhub contest,” explained Koplin. Kristi Koplin lives in Lehi but works in Park City and Heber City as an Instacare nurse. She was sent home after being exposed to the coronavirus during the wave that hit Park City in early March. “It was a full-blown panic for a while there. Things have calmed down a lot – only locals are still in town [Park City] and that feels a little weird, but good,” said Koplin.

Koplin went from being a Track and Field athlete at Southern Utah University (SUU) throwing the hammer, to ROTC training and nursing school, then the USA Bob Sled Team. She has divided her time for the last ten years between the Army Reserves, the Bob Sled Team, and her nursing career. Since bob sledding isn’t a high school or collegiate sport, Koplin got into it at the suggestion of a coach who happened to see her throw the hammer at the NCAA Track and Field Nationals and a member of the USA Bob Sled Team who saw a video of  Koplin competing at Nationals then sent her a message on social media. “I went into Nationals with high expectations, but I hadn’t prepared myself mentally. I even hit a cameraman with the hammer! It was pretty disappointing because I’m a competitive person and I figured it was my last chance to really compete,” Koplin recalled. She placed 12th in the nation at that final meet but was hoping for a better finish.

After two strangers suggested bob sledding, Koplin did a test in Park City and performed well enough to be invited to Team USA’s camp. “It’s the most fun sport! The bob sledding community is like a family. Being at the 2014 Winter Olympics in Sochi, Russia is one of my top five favorite experiences in my life,” said Koplin. She was an alternate on the team for the 2014 Olympics, but she got to experience everything about the Olympics and the team took home a silver medal.

Koplin’s 2020 bob sledding season was cut short with a neck and head injury in January 2020. “My body and my brain really needed this break. I feel like the quarantine has forced me to slow down and take good care of myself,” she said. Koplin has seen people test positive for coronavirus even though they have been staying at home. “It’s so contagious and you never know how it’s going to affect you. I just hope everyone can stay as healthy as possible. Be smart – if you’re feeling even a little sick, don’t go out,” said Koplin. “I think the thing that is going to stand out when this is over are the stories of those who helped.”