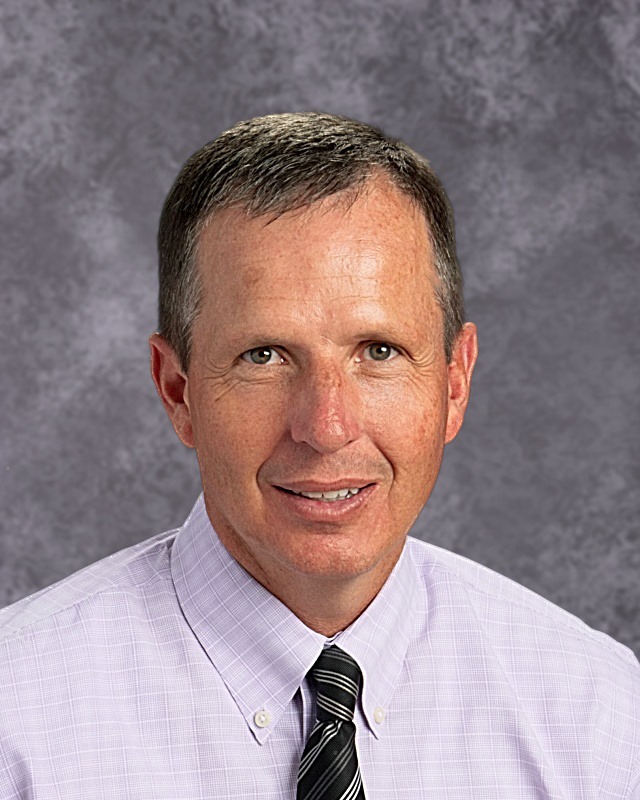 Lehi High School Principal Doug Webb has been named Alpine School District’s Accent on Excellence District Administrator of the Year. Webb has been principal for three years, but he was also in the LHS class of 1988, a teacher at the school for eight years, and his wife and children attended Lehi High. It’s safe to say the Webb family “bleeds purple.”

During Webb’s three years as principal, Lehi High School has been undergoing a major rebuild. He has seen buildings torn down and new ones take their place, always expressing optimism for the future of the school. “He always asks, ‘How is this going to help people?’ That’s his primary focus – helping people. The faculty is so excited for Principal Webb, we love working for him,” said King.

“Principal Webb is the best. We feel so grateful and proud to have him as Lehi High School’s principal,” said Candace Jones, a Lehi High School parent. “I love that as construction necessitated less parking that Principal Webb faithfully rode his bike to and from school each day – even throughout the winter. He genuinely cares for the students and is a top-notch professional.”

The Accent on Excellence Teacher of the Year representing the Skyridge Cluster is Jamie Alvizo from Skyridge High School in Lehi. Alvizo is in her seventh year teaching chemistry and coaching the cross-country team. “Coach Jamie is probably one of the most optimistic and enthusiastic people you will ever meet, and that positivity impacts her students, her athletic teams, and everyone she interacts with,” wrote Karen Ashman on the school’s social media page.

“I tell my students not to be afraid to make mistakes, to recognize that failure will happen. Every test and every quiz is a stepping stone,” said Alvizo. She was the only chemistry major in her graduating class to go into teaching. “My dad became a teacher after being an electrical engineer for years. I saw how much he loved it and now I know how awesome it is to see people learn. It really is a joy,” Alvizo continued.

Jamie Alvizo inspires Skyridge athletes with her coaching and her own running. In July 2019 she ran her first marathon, the Deseret News Marathon, and won her age group. “It was fun to challenge myself and accomplish a goal. I tell my athletes that they can keep challenging themselves after their high school careers are over,” said Alvizo. Running can be done independently, but the cross-country team has missed running together. “It’s a powerful thing to be part of a team. These athletes are finding out how strong they can be mentally during this time away from each other,” said Alvizo.

“We are so proud of Mrs. Alvizo, She is an amazing teacher and incredible coach and extremely deserving of this recognition. We are so grateful for her,” said Joel Perkins, principal at Skyridge High School.

Willowcreek Middle School health and PE teacher Jordan Hadlock was chosen Teacher of the Year for the Lehi cluster. According to Hadlock’s nominating form, “Jordan plays a crucial role in our school leadership team and cares about the art of teaching and creating the best environment possible for students to learn. Jordan recently created a podcast called ‘The Healthy Educator’ to help teachers focus on health during social isolation and the global pandemic.

Each recipient of the award is recognized at a gala evening which will be held in August. The winners also received a gift basket and a $500 award. According to Hadlock’s peers, “Jordan is truly an amazing educator.”

The Accent on Excellence Awards were presented in a Zoom meeting instead of in person this year. Jamie Alvizo was surprised with the presentation, thinking she was going to a meeting for teachers. The faculty at Lehi High School found out about Principal Webb’s big win over email.