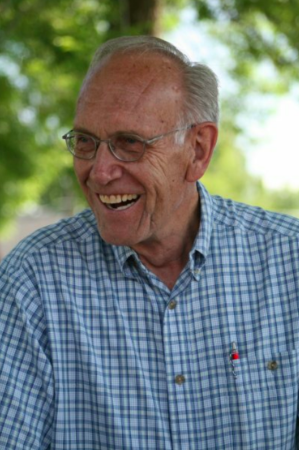 On May 28, former Lehi City Mayor, Ken Greenwood, will celebrate his 80th birthday with friends and family. A lifetime Lehi resident, Greenwood served as mayor of Lehi from 1998 through 2006. His entrepreneurial leadership, work ethic, and love of Lehi have left a legacy for generations of Lehi citizens.

He was born to Opal and Mark Greenwood in Magna, but shortly thereafter his parents moved to Lehi. He attended elementary, junior high, and high school in Lehi. Greenwood admits he wasn’t a great student. He confesses he ran away from kindergarten and hid in the teacher parking lot by the school. He wasn’t discovered until teachers left after school and found the five-year-old hiding. “It’s a miracle I wasn’t run over,” he said.

He did not enjoy reading in the early grades and spent many recesses in his classroom. Greenwood said, “It wasn’t until I read Tarzan of the Apes that I fell in love with books. I now love to read.”

He graduated from Lehi High School in 1958. During high school, he was elected senior class president and participated in basketball and football. Greenwood attended College of Southern Utah (Southern Utah University) and Utah State University. In 1959, he married his high school sweetheart, Reta Wing.

After learning the carpet installation trade, he, along with brother Dennis, and their father and mother pooled their resources and opened Greenwood Carpets, located between American Fork and Lehi. With his mother as an interior designer and the two brothers as flooring experts, the business flourished. In the early ’70s the Greenwoods bought what is now the Ogden’s Carpet building and the current Parker Brown building on Lehi Main Street and expanded their business. They eventually completely remodeled the Parker Brown building and established the Le Feria, a beautiful reception and event center. They also bought and remodeled the old Larsen Market and an adjoining building. The Larsen market became The Ye Old Pool Hall Gift Shoppe and the adjoining building, The Milk Depot.

In 1972, a tragedy occurred when the reception center caught fire and burned. The community rallied around the Greenwoods and held fundraisers to help rebuild the lost building. Ken said he was overwhelmed by the support of the community and resolved to help repay the kindness given by the citizens of Lehi. His resolve to help others has been a continuing effort for the last 50 years.

In 1997, after serving on the Lehi City Planning Commission, and becoming involved in Lehi City government, he decided to run for mayor. He won the election and served the city for eight years. It was during this time Lehi began the growth and development boom that continues today.

Greenwood’s style as an administrator was unique. In an article about Greenwood in the Deseret News, the headline read, “ Cursing Mayor, a blessing for Lehi.” His manner was compared to early Mormon leader, J. Golden Kimball. His daughter, Val, said, “He has a heart of gold and a ‘J. Golden Kimball’ way of expressing himself. Many miracles have transpired in many lives because of his willingness to work and dream big.” Being politically correct was not a problem in Greenwood’s administration.

During Greenwood’s administration, Thanksgiving Point and Traverse Mountain projects were approved. The property was acquired for Pioneer Crossing, The Legacy Center, and the sports complex on 7th South became a reality. Land for an additional park in north Lehi was negotiated. Costco and Cabela’s became part of the retail landscape of Lehi. The Rippy Literacy Center was built. Lehi Cemetery was expanded, and 1200 East was widened. These are just samplings of the projects envisioned and built during Greenwood’s time in office. One city worker said, “Mayor Greenwood could be found many times during late-night hours working to finish a carpet job or repair something at the city offices.”

In March of 2006 to September of 2007, the Greenwoods served a mission for the Church of Jesus Christ of Latter-day Saints in Tanzania. They loved the people of this African nation and continue to be a support for friends made during their mission.

In addition to his city, church, and parent duties, Greenwood played bass in a country/western band called the “Sundowners.” He and three friends, Butch Scott, Marlin Barnes, and Warren Fitzgerald played at churches, civic events, and parties for nearly 20 years. They still enjoy getting together to “pick and grin.”

A tribute was written by former Lehi City Manager Ed Collins. “In more than 30 years of working with elected officials, I have never worked with anyone with the total selfless dedication to improving people’s circumstances that Ken displays all the time. He’s tiring to be around. He was nicknamed “The Handyman Mayor.” He also spent countless hours doing projects for friends, family, employees, strangers, or anyone who asked. He fixed clogged drains, built entire rooms, laid carpet and vinyl, and carried a complete shop of tools with him everywhere he went, always ready to quickly repair anything that needed attention. He is a plumber, flooring guru, sheetrock finisher, general contractor, and life coach. He dragged me along on a few projects and what a complete honor and privilege it was and still is to work alongside him, whatever the task. And his advice: ‘priceless.’ If only I could tell what an honor it has been to be counted friend to this man. There are no words.”

Ken and Reta are devoted parents to five children, Scott, Brad, Val, Clint, and Travis, and their families. The couple has helped build a home for each one of their children. They have 20 grandchildren and 32 great-grandchildren and counting. Val said, “Dad calls each of us every day. He is always there when we need him.”

Foster care student graduates from SHS, sets example for others