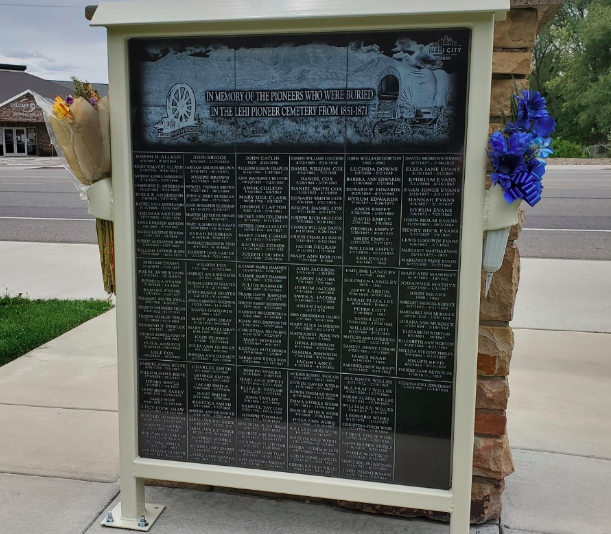 For the past 70 years, Lehi’s earliest residents who were laid to rest in the “Old Pioneer Cemetery” were remembered with a monument created by the Daughters of the Utah Pioneers (DUP) on State Street at approximately 70 West. On Friday, May 22, a granite and steel memorial with the names of those Lehi pioneers was installed, the culmination of years of research by Kathleen Lott of the DUP, Lehi Cemetery Sexton Shawn Winters, Eagle Scout Grant Whitehead, and the Lehi Historical Society and Archives.

The few dozen people who made the arduous trek to Lehi (a small fort at Sulphur Springs) during the fall of 1850 lived in rough and even dangerous conditions. The first death in the settlement was John Griggs White, a 75-year-old pioneer who had, with his wife and children, joined The Church of Jesus Christ of Latter-day Saints and survived persecution and leaving homes in Kirtland, Ohio, and Nauvoo, Ill., as well as the trek across the plains to Utah. John was frail by the time he was living in a cabin in that primitive settlement and didn’t make it through the first winter. White’s son-in-law, David Savage, made a coffin from a wagon box for John and a funeral was held in his little pioneer home. John Griggs White was the first person to be buried in the cemetery just west of Dry Creek in February 1851.

Over the next 20 years, between 1851-1871, approximately 185 Lehi residents were added to the Old Pioneer Cemetery. Most of the deaths were babies and children, but women and men who had established the settlement and served as police and doctors and religious leaders were among the number as well. George William “Will” Thurman, a 28-year-old schoolteacher, was buried on Christmas Day 1871 after being murdered by an angry, intoxicated pupil Thurman had disciplined earlier in the day. Thurman was born in Kentucky and was heading to California during the Gold Rush when he stopped in Salt Lake City, joined The Church of Jesus Christ of Latter-day Saints, and moved to the small Lehi settlement to teach school and raise his family. His death was a shocking blow to the small, quiet little town.

In 1872 the growing city of Lehi widened State Street and the railroad was putting down tracks right through the cemetery. The cemetery was moved to its current location at 1525 N. 600 East and bodies and markers were reburied there. A few families of the dead asked that their loved ones not be moved, and others had no family to advocate for them or identify them. The old cemetery fell into disrepair and many markers were lost. In 1950, the DUP installed a monument on State Street for the unnamed pioneers from the old cemetery for the centennial celebration of Lehi. The monument was moved a block north of the original location a few years later because cars kept bumping into it. Between 1954 and 1977, skeletons were uncovered on the old cemetery grounds as businesses installed sewer lines or during other construction projects. Those remains were turned over to the police and reburied in the Lehi Cemetery.

Death records before 1895 in Lehi have been lost, so Kathleen Lott had to reach out to Lehi residents to help find the names of all the pioneers buried in the Old Pioneer Cemetery. Grant Whitehead from Boy Scout Troop 109 was looking for an Eagle Project about the same time Lott needed help. Grant organized 20 people to help research genealogical websites to find anyone who died in Lehi between 1851 and 1871. Lehi City paid for the granite memorial, designed and engraved by Ben Dalton of Dalton’s Memorials Engraving, that is now on the north side of the monument on State Street.

“I’m so glad this has been done to honor the pioneers of Lehi,” said long-time resident Penny Cutler. Many other Lehi citizens recognized their ancestors’ names and expressed their approval of the project.

“This is wonderful – so long in coming. Thanks to all those who helped with this project,” added Rhea Lewis.