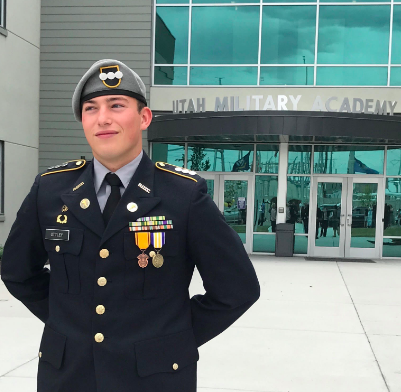 It’s clear that Richard Ottley is an overachiever, in the all the ways that matter. A recent graduate from Utah Military Academy in Lehi, Ottely is the class valedictorian, a multi-varsity athlete, Cadet Captain of the Year within the Junior Reserve Officer’s Training Corps, Junior Bronze Medalist from the Sons of the American Revolution, and recipient of the Douglas MacArthur Military Leadership Award. And that’s just a naming a few.

Military life was not something that Ottley had seen before. No one in his family served in the armed forces since his great-grandfathers served in World War II. Ottley said, “My family was very surprised when I said that I wanted to join the military. My family is very supportive. It’s a little unnerving for a parent to send their kid off to join the military where they are going to be away from home a lot. But it’s what I really want to do.”

During his sophomore year of school, Ottley decided that he wanted to go to West Point. “To get on that path, I needed to really see what life in the military is like and if I really wanted to take that path. Utah Military Academy was a new school at the time, just finished here in Lehi, so I started at the school to help my chances of getting in to West Point as well as giving me a taste of military life.”

Attendance at a military school was just one step in an arduous process to acceptance at the prestigious U.S. Military Academy at West Point. “The West Point application is about three times as big as most other school applications, due to the fact that you not only have to fill out applications for West Point, but applications for congressional nomination as well.” For acceptance to West Point, an applicant must have at least one nomination from their congressional leaders. Ottley received four such nominations, one from Senator Mitt Romney, one from Senator Mike Lee, and two from Congressman Ben McAdams. Receiving two nominations from one congressional leader is fairly unheard of and a really big deal. “The senators are the first to find out that their nominee’s have been accepted to West Point. So, it was pretty cool that I got a personal phone call from Congressman McAdams, and Senator Romney, and Senator Lee.”

High academic achievement is a must for high school graduates hoping to attend prestigious collegiate establisments. Ottley is class valedictorian, with a GPA of 3.915 and a 32 ACT score.

Academics alone isn’t enough to get an applicant in to West Point. “The three things they always talk about are academics, athletics, and leadership, so it was on me to get into athletics. I started joining every team that I could. Rugby, track and field, soccer, basketball, volleyball, anything and everything I could get my hands on. I’ve always had the academics, I’ve always been good at school, it’s just come naturally to me. I needed to keep that up with the rigor of leadership and all the extra curriculars I was doing. The great thing about UMA is they provide a lot of opportunities in terms of leadership and extracurriculars. At maybe a bigger school I would have only been able to play one or two sports, but UMA is a smaller school and I could play essentially all I want,” said Ottley.

Ottley said one of the best things about UMA was being able to participate in Junior ROTC. “Junior ROTC has provided me with a lot of leadership opportunities and experience,” he explained. Ottley became a cadet captain, overseeing approximately 100 cadets that he is tasked with watching over and leading daily.

Ottley is looking forward to his time at West Point and plans to study civil engineering. “Last year I was able to attend the Summer Leaders Experience at West Point. The one big thing I realized when I was there was the amount of people similar to me,” he said. Ottley will leave mid-July, assuming everything goes as currently planned and there are no delays relating to coronavirus.

The first step for Ottley and his fellow West Point classmates will be surviving six weeks of basic training, a period so intense it’s unofficially known as Beast Barracks. “I’m looking forward to those first few days when they yell at you and shave your head. That’s when the fun begins.” laughed Ottley.

Could COVID-19 usher in livestreamed school board meetings?