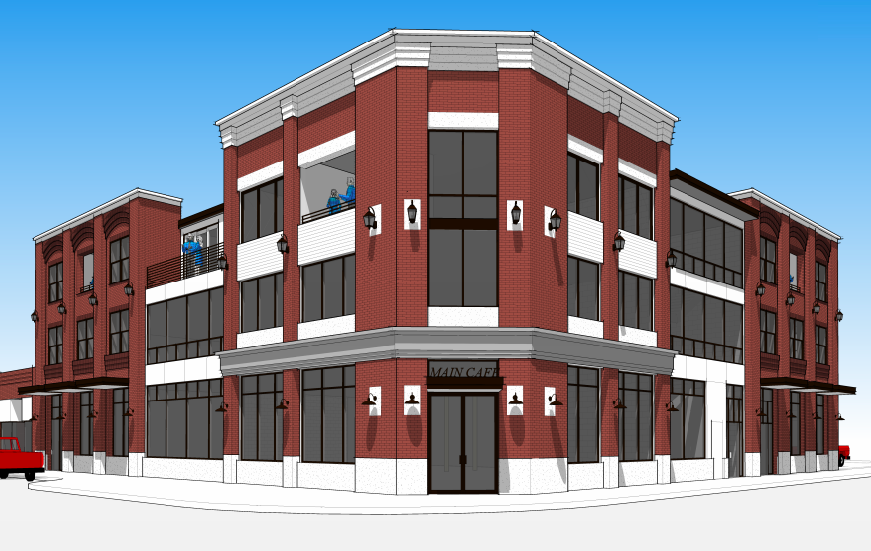 On Thursday, June 11, the Lehi City Planning Commission held a regular meeting virtually once again. Included on the agenda was the final site plan for the former Porter’s Place location on Main Street, as well as a proposal for an ice cream parlor on West Main Street across from Vets Ball Park.

The .21 acres on the corner of Main Street and Center Street is best known as the location of the former Porter’s Place. The corner has been incorporated into the boundary of Lehi City for 168 years. Controversy has swirled around the former restaurant site for the last three years with many Lehi residents objecting to a proposed three-story building concept. Knowlton General’s final plan for the property meets the City’s Historic District standards and has the support of Lehi City staff. “Staff feels that this building would be a major step forward in creating an active and vibrant downtown while still preserving the heritage that helps set Lehi apart from other cities,” Lehi City Planner Jacob Curtis wrote in the proposal for the Planning Commission.

Commissioners had very few questions about the final site plan, having spent the last two years hashing out details with the developer and the city. Knowlton General has an agreement with Lehi City for 20-plus parking stalls to be set aside for the property on the west side of 100 West in addition to 14 covered stalls behind the building. The Planning Commission voted unanimously to approve the final site plan for the new building.

Casey Hansen proposed a zone change from RA-1 (Residential/Agricultural) to NC (Neighborhood Commercial) on .33 acre at 1045 West Main Street, the first step in building an ice cream parlor on the site. Although the proposed zone change is consistent with the city’s General Plan, several commissioners had concerns with the location.

“This looks like an island of Neighborhood Commercial between residential neighborhoods. I’d like to see this designation used as it was intended, as a buffer between Residential and Commercial. If it were on a corner lot, it would be more palatable,” said Commissioner Brent Everett.

“I think we need to be more strategic with businesses on Main Street. We need to encourage continuity,” added Commissioner Scott Bunker.

Lehi City Engineer Ross Dinsdale pointed out that many homes surrounding the West Main Street property are for sale, and the trend toward Commercial sites is underway. “This is on Main Street, and eventually everything will transition to Commercial. They need to start somewhere,” said Commissioner Abram Nielsen. “My problem with this being an ice cream parlor is that it’s not there to serve the three houses surrounding it, it’s meant to serve the ballpark across the street. It’s in the middle of the street and there’s no crosswalk or access to it from the ballpark,” continued Nielsen.

The commissioners voted to approve the zone change to Neighborhood Commercial on the West Main property with Commission Chair Matt Hemmert and Commissioner Brent Everett voting “no.”

The following agenda items were unanimously approved to go forward to City Council at the June 11 Planning Commission meeting:

The next Planning Commission meeting is Thursday, June 25, at 7 p.m. Residents may submit public comments for agenda items before 5 p.m. the day of the meeting.