Opinion: Fatherhood, not for wimps 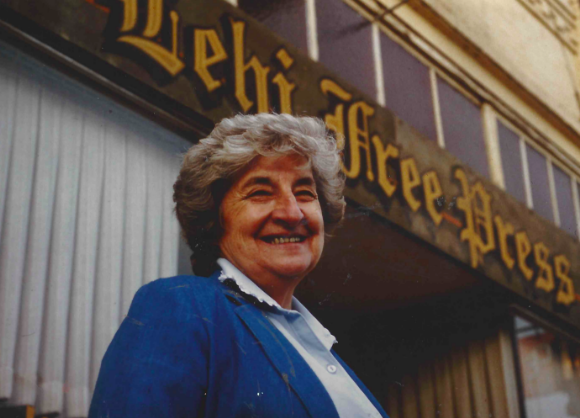 The following is a reprint of a column written by the late Betty Fowler, editor of the Lehi Free Press for nearly 25 years.

Fatherhood…it creates a unique creature. Where does it begin? For most, it begins in a few tense minutes in a surgically sterile hospital delivery room. As one young first-time father, as he entered the portals of destiny, looking a little green around the gills. The nurses quickly handed him a full- length paper gown and said he must wear it when witnessing the blessed event.

Moments later, frantically groping at the ties, thinking everything might be all over, he stumbled back in the delivery room. His young wife, in the last stages of delivery, lovingly took his hand as she looked for the strength to finish her task. But suddenly, uncontrollable laughter burst through the room, and in between gasps for breath, the nurses, doctors, and new mother help the baby make its debut. But who, to the baby’s innocent chagrin, should steal the show? Her bewildered daddy–naked, except for a pale green crumpled paper hospital gown tied in the front.

But once that cuddly little child is cradled in the strong arms of her father, amateur hour is over. Instinct tells him it’s up to him. He hooked—hook, line, and sinker.

One father told of a time after weeks of sleepless nights, walking the floor, heating a bottle, waking up in a rocking chair with the bottle in the baby’s ear. In that one careless moment, he had felt like throwing the little so and so out to the dogs. But knowing his wife was exhausted, he said he would take the night shift.

First, he bounced–the baby loved it and wanted more, so then he swayed and just as his arm went to sleep, the baby didn’t. Then he swayed, bounced, and walked. Finally, after three hours, the little dumpling dozed off. Now all dad had to do was to get the baby into bed without waking him. He tried to lift him over the side of the crib, but the baby stirred. So, he tried to put down the sidebar with his foot, but it was too noisy.

Finally fighting off total exhaustion and frustration, he climbed into the crib and lowered the baby down into his bed. Just as he is painstakingly taking his hands and arms from around the baby’s neck, the mother turns on the light—and seeing her husband kneeling over the baby in the crib with his hands close to his neck, screams “No honey, don’t strangle him! I’ll rock him the rest of the night!”

First-time fathers shouldn’t be discouraged, after all, it’s the first time the child has grown up. And through all the struggles and mistakes comes the best times of our lives–the happiest moments and most important –the undefinable love between a dad and his son or daughter. Believe me, I know.