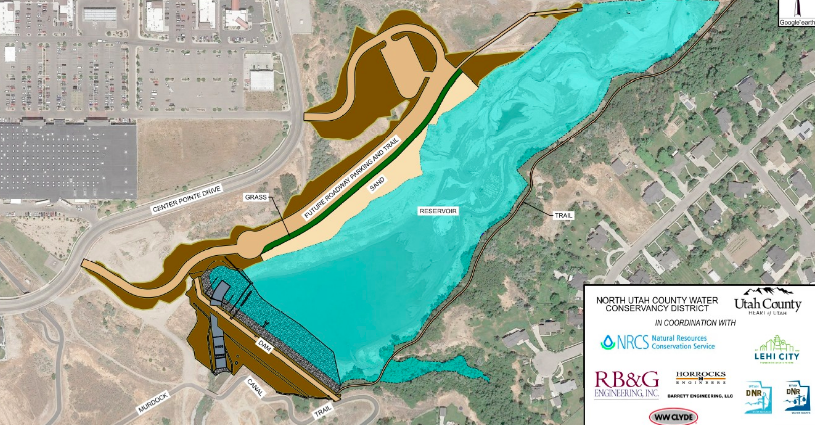 When Mayor Ken Greenwood hired Lehi native, Lorin Powell, as a city staffer, he brought a man of unusual dedication to his profession, concern for the well-being of the citizens of Lehi, and a student of the complexities of water acquisition and distribution to Lehi City government.

The vision and the will to bring Dry Creek Reservoir to fruition should be attributed to Powell. A fellow city worker said, “This should be called Powell’s lake.” The quiet Powell would never seek recognition for his accomplishments, but Mayor Mark Johnson said, “Lehi City engineer, Lorin Powell, has been an incredible proponent of the Dry Creek reservoir project since the design was first drawn in 2014.”

Powell met with the Natural Resources Conservation Service (NRCS) early in 2014. Improvements at the Dry Creek detention facility were discussed, and engineers determined a need for seismic upgrades. Powell began an evaluation of this sedimentation basin as a potential pressurized irrigation pond for Lehi City as well as a regional recreation facility.

Consultants were hired to determine the viability of Powell’s vision for the facility and to make sure Lehi would receive the city’s full share of the water allocation. The thought of having a dual-use facility was particularly intriguing to Powell after his more than 30 years of service to Lehi.

Powell directed the engineering staff to research other such facilities throughout the state. A significant amount of data was compiled, from parking design, bathroom facilities, recreational potential, including boating and swimming facilities to improvements needed within the reservoir itself to promote healthy aquatic life.

Many other state and regional agencies were involved. Powell worked tirelessly with these agencies, particularly Highland City, North Utah Water Conservancy District USDA-NRCS and their design team, the Utah Division of Wildlife Resources, Lehi City Staff, and others to ensure the project would benefit the residents of Lehi and surrounding communities.

One Highland City Council member was vehemently opposed to the project but was eventually convinced it would benefit both communities, and the project moved forward. Powell also extended his experience and expertise to Lehi City Public Works and Parks Department in creating a reservoir facility and amenity design that would preserve the long-term maintenance and functionality of this basin as a critical flood control and recreation facility.

Six years ago, the project was only a vision in Powell’s mind. In the subsequent years, the concept plan for Dry Creek was approved, funding mechanisms were put in place, and presentations were made to Lehi City Council. Many hours of negotiation with Highland City, Patterson Construction, landowners near the proposed project, and other water agencies were held.

In late 2019, the project began with the construction equipment moved into place. Powell’s dream was to be realized, and his years of work were coming to fruition. Lehi’s Director of Development, Kim Struthers said, “The Dry Creek Reservoir project was something Lorin worked extremely hard to make happen. There were a lot of moving parts to it. It required dealing with multiple governmental entities, boundary adjustments, among other things. There were several times along the way that it looked like it might unravel, but thanks to Lorin’s dedication and commitment to make it happen, he was able to keep it moving forward to the finish line.”

City Council member Paige Albrecht added, “Lehi City has been incredibly fortunate to have had Lorin Powell’s expertise guiding the Engineering Department for so many years. Lorin has provided steady consistency through our extreme growth, while always keeping an eye on future needs as well. The Dry Creek Reservoir project is a great example of how Lorin seeks out unique opportunities to build Lehi’s infrastructure providing maximum benefit at minimal expense. I don’t think people realize what a huge challenge it is to keep up with the needs of the City growing as fast as Lehi is.”

Finally, a Lehi City employee who wished to remain anonymous said, “Lehi could lose many of our employees, but losing Lorin would be a tragedy.”