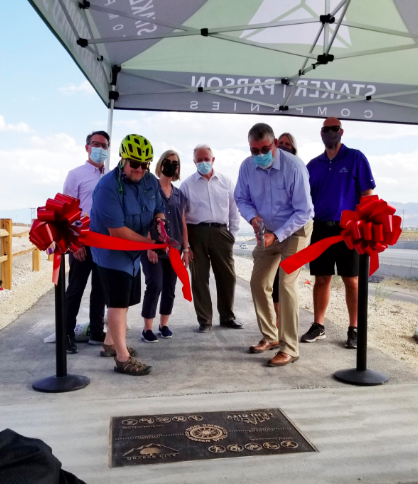 Officials from Lehi and Draper unveiled a plaque with a golden spoke on the Sensei Trail near the Point of the Mountain on Tuesday, July 28, officially connecting the two cities and 30 miles of trail.

“As a cyclist and someone who enjoys the trail system, I couldn’t be happier about being able to commute all the way to Lehi without using what is clearly a treacherous road below us,” said Draper Mayor Troy Walker. The trails meet above a busy Interstate 15 and the Frontage Road that has no shoulder for cyclists and runners. “We’ve been planning a north-south trail connection for years – longer than Mayor Johnson and I have been in office,” Walker continued, speaking into a microphone to be heard above the noise of the freeway.

“Our Parks and Recreation staff has worked so hard to make this happen. I rode this trail with my daughter recently and it was so enjoyable that we went all the way into Draper. We didn’t realize the strength of the wind at our backs until we turned around to come home in that headwind! What an awesome trail and addition to both our cities. These trails are really turning into something spectacular,” said Lehi Mayor Mark Johnson.

After the golden spoke plaque was unveiled, Walker and Johnson each took a pair of giant scissors and cut through the red ribbon on the trail. A few families had ridden their bikes to the ceremony and crossed the border together.

“Lehi has about a mile and a half of trail that we’re currently working on through different land grants. Crossing SR92 is our biggest struggle. The footings are in for a bridge to go across it. Once that is built, the trails will be completely connected,” said Steve Marchbanks, director of Parks and Recreation for Lehi.

Two years ago, the Traverse Mountain Trails Association (TMTA), a nonprofit started by residents of the area, started a six-mile trail loop. They have since added three more loops to the trails. “Councilman Paul Hancock and I ran a half marathon on the Traverse Mountain trails and never repeated a section,” said Andrew Lambert, a member of the TMTA. “It’s really neat to see cycling groups and hikers out here – the trails open up the back country to more people.”

“I’m so excited to have more trail connectivity. There’s a mountain bike trail between Corner Canyon and Lehi that is almost complete, which is great. This used to be a dead end where you had to turn around, but now you can keep going for as long as you want,” said Lehi City Councilman Paul Hancock.