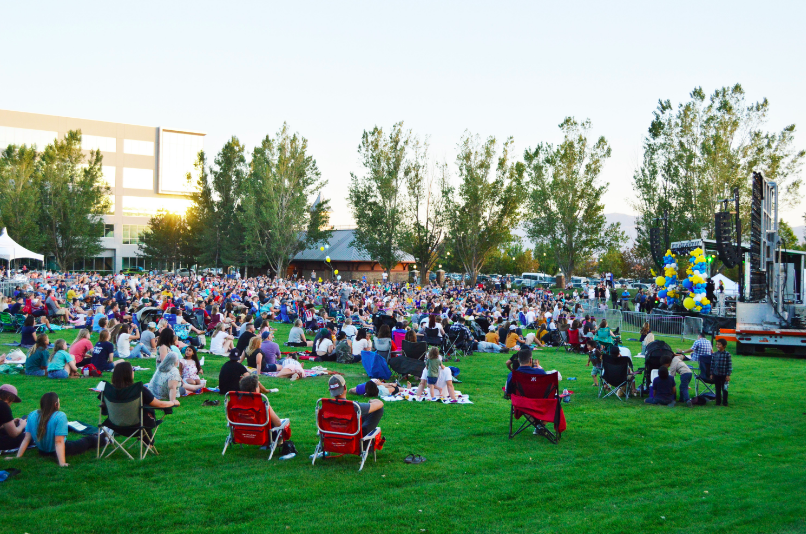 A crowd of more than 4,500 people gathered at Thanksgiving Point’s Electric Park for a rally on World Day Against Trafficking in Persons, Thursday, July 30. Operation Underground Railroad (OUR) hosted the rally, which included performances from Utah favorites like Jon Schmidt, Alex Boye, Lindsey Stirling, and the band The National Parks, as well as a surprise appearance from OUR founder, Tim Ballard.

“We had to turn a lot of people away. Without the COVID-19 restrictions, we could have had twice as many people here,” said Diane Orrock, an OUR volunteer who turned away dozens of people hoping to enter the free concert at Electric Park. The rally and concert were organized in just two weeks, with volunteers and performers jumping onboard at the last minute. Attendees registered online and displayed proof of registration to enter. Family groups were instructed to sit together and leave six feet between groups.

“I’m going to ask you to do something I haven’t asked a crowd to do since March 13th. I’m a big fan of connection and eight-second hugs. I want you to turn to the person next to you and hug them for eight seconds,” Collin Kartchner, founder of Save the Children, instructed the enthusiastic crowd after taking off his face mask and throwing it offstage to cheers and whoops. Most of the crowd were not wearing masks, although they were seated socially distanced in family groups. “We’re here to talk about children, to help our kids. Right here in the U.S. every year 200,000 kids are sold into slavery. We have to be their voice. 2020 is the year we stop this injustice,” Kartchner continued.

Utah Attorney General Sean Reyes took the stage next. “The vision of Operation Underground Railroad was to create a movement to awaken people around the world that they could rescue kids and then take survivors and empower them to reclaim their lives,” said Reyes. “Before Tim Ballard, OUR, and other organizations, Utah had a failing grade from Shared Hope International. Today Utah is the tip of the spear, not just in the U.S., but globally in the fight to liberate children from sex trafficking, labor trafficking, organ harvesting, and illegal adoptions,” Reyes continued. Shared Hope International is a global organization that strives to prevent the conditions that foster sex trafficking, restore victims of sex slavery, and bring justice to vulnerable women and children.

The crowd listened attentively to video clips on a large screen before the concert. Many ran to the gate to witness Tim Ballard’s arrival by helicopter in the parking lot west of Electric Park, cheering as he made his way to the venue surrounded by videographers and photographers. “We started this organization in Utah because of you. There’s so much light here,” Ballard told the crowd, all of whom were on their feet applauding.

There were rallies all over the country on World Day Against Trafficking in Persons, a resolution declared by the United Nations to raise awareness of the situation of victims of human trafficking and for the promotion and protection of their rights. According to the non-profit Polaris Project (polarisproject.org), a national human trafficking hotline, 22,326 trafficking victims and survivors were identified in 2019. Polaris Project has studied data from victims and identified top recruitment tactics and forms of force, fraud, and coercion. The top recruitment tactics in sex trafficking are manipulation through intimate partner relationships, marriage propositions, or familial coercion. The top five risk factors for involvement in sex trafficking are substance abuse, runaway homeless youth, recent migration or relocation, unstable housing, and mental health issues. According to the Polaris Project’s website, “Hearing directly from the person affected gives the best information and avenue to provide meaningful help, whether that be finding a safe place to stay the night, an attorney, a trauma counselor, transportation, or seeking law enforcement intervention.”

More victims and survivors are contacting the trafficking hotline than ever before. If you or someone you know needs help, call the U.S. National Human Trafficking Hotline toll-free, 24 hours a day, seven days a week at 1-888-373-7888 to speak with a specially trained Anti-Trafficking Hotline Advocate. Support is provided in more than 200 languages.