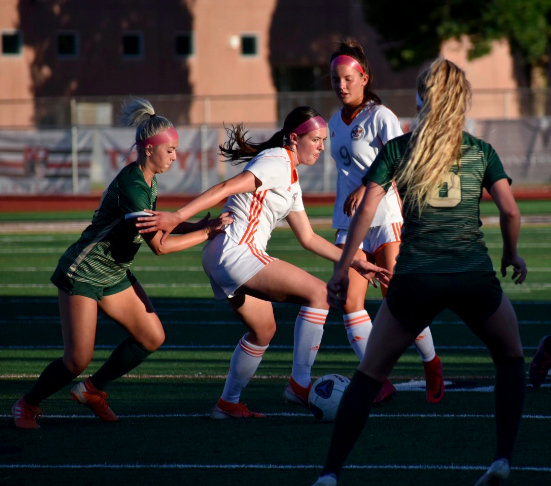 At Snow Canyon for the opener on Aug. 12, the Falcons only yielded a single goal but were unable to find the target themselves.

“We struggled getting the ball in the net, but we were able to play better than we did against Timpview,” said Coach Jerry Preisendorf.

“At Desert Hills the next day, we were able to do more and produce the result that we wanted,” he continued. “We were able to pick up our pace of moving the ball around.”

As a result, senior Madison Snyder broke the scoreless tie in the 32nd minute. It was still 1-0 at the break, but the Thunder got the equalizer in the 53rd minute to make it 1-1.

Preisendorf said there were some great individual moments in the game that really took the girls to another level.

“Maddie Snyder’s second goal was all about effort,” the coach said. “She shrugged off a defender, beat the keeper and was able to put it in the net. She was a beast on that particular play, but the energy that went through the team was amazing and helped carry us through to the end.”

That score turned out to be the game-winner, but Skyridge picked up a couple of insurance goals from freshman Amanda Caswell in the 71st minute and senior Ellie Nelson in the 73rd minute. Junior goalkeeper Haley “Beast” Ellis played between the pipes for all three matches.

On Aug. 14, the Falcons were edged at Crimson Cliffs 1-0 in a morning contest. “Playing the night before was a big factor in this one,” Preisendorf said. “I played a lot of the reserves in that game to give them some confidence and experience.”

The trip was a good bonding opportunity for the team. “The one thing that stuck out to me was the starting varsity team knows we are getting better and they know we need to build,” the coach said. “The girls are ready to be at home this week.”