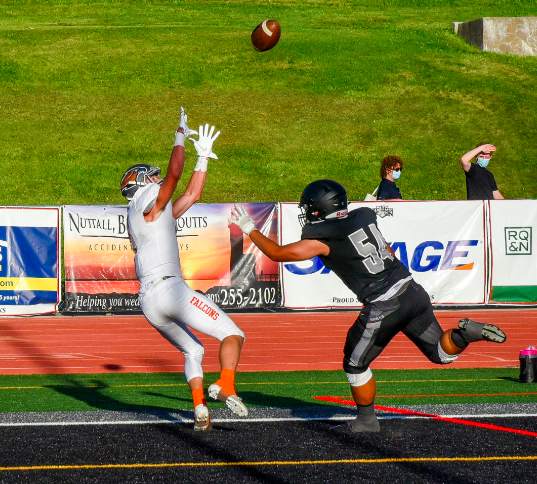 In an electrifying game filled with thrilling moments, the Skyridge football team posted a comfortable 33-13 victory at Alta on Aug. 14 to open the season.

The Falcons jumped all over the Hawks in the first quarter 26-0 and never looked back.

The Skyridge defense dominated the game as Alta struggled to put points on the scoreboard. The effort was led by senior defensive end Stone Mulitalo, who pressured the opposing quarterback all night.

Fellow safety Sawyer Winward with cornerbacks Coleman Beck and Smith Snowden contributed heavily to preventing the Hawks from scoring during the first quarter.

“Defensively we played pretty solid. I really liked our physicality and our pass rush was great during the game,” Lambert said. “I feel like we all played extremely hard and well for most of the game. I’m happy we came out with a win.”

On the offensive side, the Falcons appeared to have regained the efficiency that has marked their scoring output from past years, led by sophomore quarterback McCae Hillstead and senior wide receiver James Palmer.

Palmer scored the first touchdown of the game with an amazing 15-yard catch in the corner of the end zone. He followed up with a second first-quarter touchdown on a 20-yard run.

Sheffield scored his first varsity touchdown with a two-yard run. Adamson made some tough catches across the middle of the field and scored a touchdown on a 15-yard reception. Fenton picked up tough yardage between the tackles and kept the Hawk defense on its heels.

“The game went very well and we played as a team. The offense was explosive and we executed in a high way,” Palmer said. “McCae was confident in himself and led the offense when we needed him to,” he added.

The resiliency of the Falcons was evident as they overcame a few opening-night miscues. “This team’s ability to handle mistakes was great and we bounced back every time with a better attitude,” said Palmer.

“We definitely have a few things to work on before next week’s game, but overall, I’m excited for us to build on what we’ve got going,” said Lambert.