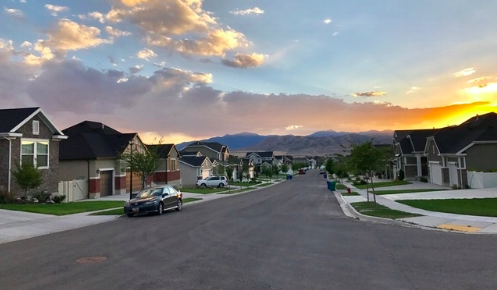 You’ve seen the Geico commercial. The one with Cynthia from the HOA cutting down mailboxes yelling “2 inches over regulation” and “this is a violation, and this is a violation.” Homeowners Associations (HOAs) are notorious for being nitpicky and overstepping boundaries and based on what some Lehi residents are saying, the Ivory Ridge HOA fits this stereotype.

The primary purpose of a homeowner’s association is to manage a neighborhood’s common areas such as roads, parks and pools. Homeowners are obligated to pay fees which range from $100 to $10,000 a year, depending on the neighborhood and its amenities. For Lehi’s Ivory Ridge residents, amenities include a clubhouse with a gym, and pool and tennis courts. The annual fee for the Ivory Ridge HOA ranges from $15-$105 per month, depending on clubhouse access. Fees also cover common areas maintained by the HOA, including medians and walkways.

Unfortunately, for many Ivory Ridge homeowners, the HOA seems to be overly concerned with residents’ property, but not as concerned with common areas. “There is a car that drives around the neighborhood weekly looking for violations,” said resident Alex Hill, “and no one is even complaining about these things [resident violations]. There was one day where I got an email with a photo of our trash cans in front of the house reminding us to get them off the street, not even an hour after the trash had been picked up.” And while someone takes photos of trash cans, residents complain about cheap landscaping and broken sprinklers flooding the streets in common areas, paid for with a monthly price tag to the homeowners.

One common area that has been the source of many complaints is along the walkway through the neighborhood that ends at the Ivory Ridge splash pad and park. A tan open fence was installed with every other slat missing, leaving homeowners’ yards available to view for any passersby. Over 10 homeowners living on Park Ridge Drive called the HOA to complain about the fence. According to homeowners, strangers can see into their yards, putting children’s safety at risk. Residents’ calls to the HOA were met with the response, “the decision has been made,” and “it’s out of our hands.”

Some residents feel that they are not getting response and consideration largely because the Ivory Ridge HOA management includes people who do not live within the community, or even in Lehi. The HOA is managed by CCMC, a Draper based property management firm including a board comprised of Ivory Homes’ employees, none of whom live in Lehi.

Other residents feel the HOA is too small for the number of homes it is tasked with monitoring. The Ivory Ridge Master Association includes six neighborhoods, which, when completed will be home to approximately 836 families.

These neighborhoods include Clubview Estates, Clubview Towns, Park Estates, Parkside, The Gardens, The Lofts, The Walk and Ivory Ridge Commercial.  The HOA board that covers these neighborhoods includes four members, Christopher Gamvroulas, Kevin Anglesey, Brad MacKay and David Zollinger who do not live in Lehi. The representative from CCMC who handles communications with residents is Michelle Pollman. Pollman was asked for comment on the HOA and its board members and did not respond.

In a recent Facebook poll of Ivory Ridge residents, 66% who participated in the survey claimed they were unsatisfied with their HOA. One resident, David Merriman, said, “The HOA is a self-important, incompetent dictatorship for whom providing absolutely nothing of value has recently become 70% more expensive over the objections of its voiceless subjects.” His comments were applauded and echoed by others. Although the Ivory Ridge HOA website claims, “we’re here for you!” in bold type, the majority of residents don’t feel that’s true.

Some homebuyers, such as Lehi resident and real estate agent Robin Warner, specifically look for neighborhoods that do not have an HOA because of these headaches. “It’s just not worth all of the hassle,” said Warner, “I’d rather be able to have a say in what goes into my yard.” Another Lehi real estate agent, Skyler Beltran, reported that over 60% of his clients who are looking for houses specifically request to not be shown homes with an HOA.

One issue that has residents in Ivory Ridge talking is the HOA’s heavy involvement in backyard spaces, objecting to residents’ use of lighting, fencing, and sports courts. Several residents have had the HOA threaten to hire professionals to take items such as lights and fences down at the homeowner’s expense if they will not agree to remove them. The gray area is language in the HOA agreement which is signed by homebuyers upon closing of escrow in an Ivory Ridge neighborhood. Words such as “unsightly” can be interpreted broadly by the HOA, and do not provide a clear definition of what is or is not allowed on their property. “I have followed the rules of the HOA and have done so in a way that increases the value of the home/neighborhood, but still they don’t accept what has been done,” said Ivory Ridge resident Seth Price. “The HOA has been difficult to work with,” added Price.  “I finished my yard thinking I’m following all the rules that I read until I got a letter in the mail telling me to take things down when those ‘things’ are not mentioned in the rules or by-laws of the HOA.”

In the Ivory Ridge neighborhood, residents are asked to submit plans for every light, plant, and piece of cement that is placed on their property–all of which must be approved before installation. Some tree species are mandated by the HOA, especially on parking strips, for visual conformity. One resident, Elise Noyes, was instructed by the HOA to plant a specific tree at her home. Seven years later, after much growth, Noyes was approached by Rocky Mountain Power, informing her that the trees were entangling power lines and needed removal. Shortly after, Noyes received a note on her doorstep informing her that the HOA was removing the trees and that she would be financially responsible for repairing the damage and filling the holes. “The HOA is very good at making regulations and raising our HOA fees while we get no support or services from them,” says Noyes, “Our yard was torn up from removing the trees and it was left up to us to financially pay for and fix the mess due to Ivory Homes’ negligence in the first place.”

If a resident’s landscaping is not approved before installation, the consequences are severe. One resident, Terry Clark, sent in her application for landscaping approval after installation and was met with a swift response with conditions from the HOA for approval. The email stated that if Mrs. Clark wanted her landscaping to be approved, which, according to Clark was all within HOA guidelines for appearance, she would have to install a 6-foot-tall white vinyl privacy fence. “What kind of control system have we signed up for?” asked Clark after receiving the email.

The Ivory Ridge HOA has given its residents contact information regarding legislative action committees, asking its residents to vote for bills that increase the power of HOAs in Utah. One bill, emailed to the entire community, asked residents to vote for new legislation allowing HOAs to foreclose on residents’ homes due to unpaid HOA dues. On this subject, resident David Merriman said, “to this HOA, we are hostages with Stockholm Syndrome, not self-governing members of an association.”

Based on the opinions of over twenty-five residents who were interviewed for this article, Ivory Ridge residents are frustrated and are ready for change. They are gathering and hope to make changes in their HOA leadership to elect new board members, who live within the community and will more fairly represent their interests. They feel the HOA at Ivory Ridge is unwilling to listen to its residents.

The Ivory Ridge HOA was contacted for comment but did not respond.