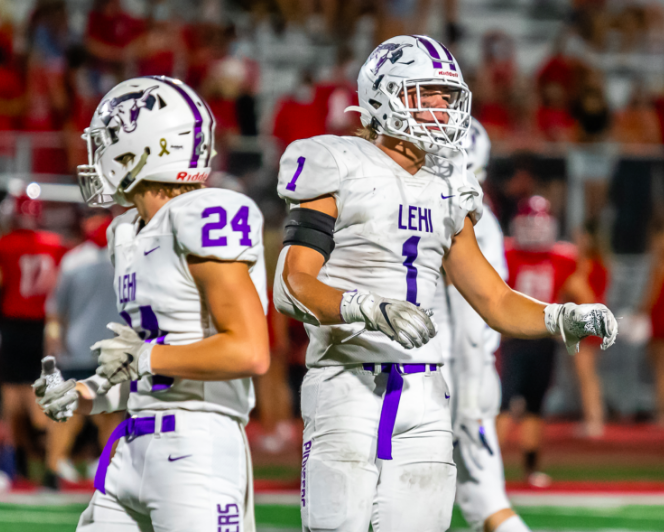 The Lehi football team overcame a disappointing opener at American Fork by earning a 36-0 victory at Crimson Cliffs in southern Utah on Aug. 21.

The Pioneers dominated on both sides of the ball, though it took some time to put points on the scoreboard.

Lehi’s first possession ended in a missed field goal, but on the next drive they marched down the field and senior running back Peyton Dieters took the ball in from the 1-yard line at the 3:15 mark of the first quarter. The PAT was missed, leaving the score 6-0.

The Pioneers dug a deep hole for the Mustangs with a pair of touchdowns just 13 seconds apart early in the second quarter, one on each side of the ball.

Dieters got the call again and caught a screen pass from senior quarterback Creyton Cooper, taking it 22 yards to add his second TD with 10:57 left to play in the second quarter. Senior kicker Carson Weber’s PAT was good, so the visitors moved ahead 13-0.

Moments later, senior defensive back Bode Hinckley intercepted a Crimson Cliffs pass and took it 36 yards for the score at the 10:44 mark. With Weber’s kick, the Pioneers took a 20-0 lead.

That tally stood until early in the fourth quarter, when senior wide receiver Grady Gonzalez took a fly sweep from Cooper across from the 11-yard line at 9:51 to make it 27-0 after the PAT.

Fourteen seconds later, the swarming defense resulted in a safety. Senior running back Chandler Jenkins capped the points for the evening with 6:06 to play after a 2-yard rushing score followed by the fourth successful Weber PAT.

After his 17-tackle performance against the Cavemen, senior linebacker Christian Wren added 14 solo and eight assisted tackles, a pass deflection and a fumble caused against the Mustangs.

“We practiced with a little bit more intensity this week,” said Coach Ed Larson. “I felt like we hadn’t prepared them very well for varsity level play, so we tried to put the pressure on and help the players understand that they’ll be held accountable for how they respond.

“I thought our defense played outstanding,” he continued. “I was very impressed with Corner Canyon’s front seven, especially for a second-year school. It was good for us to have to handle that kind of size and speed. It should help us going forward.

“They were really young in the skill positions, and I think that hurt them against us,” he added.

Larson said his staff saw some good things going through the Corner Canyon film. “The spacing from our receivers was much better in this game,” he said. “Once we start delivering the ball where it needs to go, we’ll be fine.

“I thought our special teams cleaned up their messes,” Larson continued. “We moved some players around and did a better job in that aspect this time. We got some short fields to work with.”

Most notably, senior defensive lineman Alex Long blocked a punt that gave Lehi the ball on the Mustang 10-yard line, leading to a Pioneer touchdown.

“Right now, our offense is lagging behind the defense and we just need to get that going,” Larson concluded.