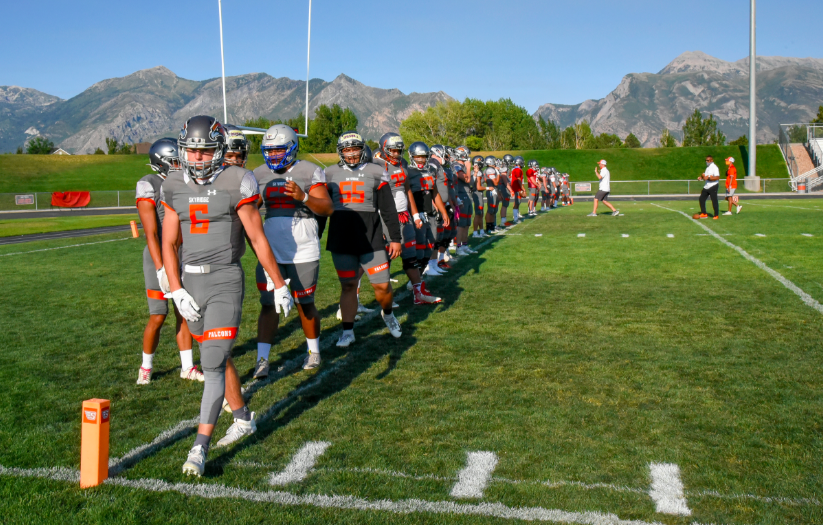 The Skyridge football team dealt Bingham the program’s first season-opening loss since 2008 as the Falcons produced a relentless 35-7 victory at home on Aug. 21.

Skyridge’s stalwart defense made it difficult for the Miners to put points on the scoreboard, but it was sophomore quarterback, McCae Hillstead who shined on the field all night.

The Falcons quickly took control of the game with a 26-yard touchdown catch by senior wide receiver Mitch Adamson with 2:51 left in the first quarter. Senior kicker Braden Buck’s PAT made it 7-0.

Hillstead scored with a 20-yard scramble in the second quarter at the 7:08 mark and was followed by junior running back Jeter Fenton snagging a TD pass on a 14-yard swing route at 6:00.

Senior wide receiver James Palmer played consistently all night and scored a third second-quarter touchdown on a 2-yard reception with 2:25 remaining in the period.

The Miners avoided a shutout by throwing for a score with 27 seconds left to the break to make it 28-7.

Kainoa Carvalho made the final Falcon touchdown with a diving 5-yard catch at the 3:36 mark of the third quarter.

Hillstead gave a stellar performance throughout the game and was the catalyst for the home team’s impressive offensive output. Hillstead completed 20 of 30 passes for 212 yards and four touchdowns with one interception and ran for one more score during the contest.

Head Coach Jon Lehman said, “I thought McCae Hillstead was great and wasn’t rattled the whole game, playing against a powerhouse that’s big up front and they do a lot of things defensively. There was no moment too big for him.”

Hillstead said, “We really executed our game plan. Our coaches tell us what to do, our lines get a really good push, O-line is doing their job and receivers are catching the ball with big-time catches.”

The defense stymied the Miners by forcing three fumbles and pressuring the quarterback throughout the game. Senior linebacker Colby Dulle had a strip sack of Miner quarterback Troy Mehn and the ball was quickly recovered by junior linebacker Tyson Stewart.

Senior linebacker Maka Fainga frustrated the rushing attack of the Miners by making stops and limiting their effectiveness, accounting for seven solo tackles and a pass deflection.

“Defensively, it’s a team game when they are playing condensed formations and big dudes. You just overwhelm them with numbers. I thought our defense played really hard and really well all night,” said Lehman.

Sophomore cornerback Smith Snowden said, “I had a couple of really good stops. Defense did really good with four turnovers and a lot of three and outs and it really was a good night.” Snowden had the unenviable assignment of guarding 6-foot-4, highly-touted wide receiver Isaiah Glasker. Snowden was up to the task by limiting Glasker to the only Miner touchdown. Snowden said, “I prepared well this week because I knew I was going against a very big receiver.”

Dulle added, “I feel great about the win. In the pre-season Bingham was ranked high and we came out and dominated them.”

Winward agreed. “The D-line made a difference tonight with making big plays. We came out and just played as a team,” he said. “We all did our job and we don’t have selfish players on the team. We just played for each other.”

That unity showed in the team’s energy and execution.