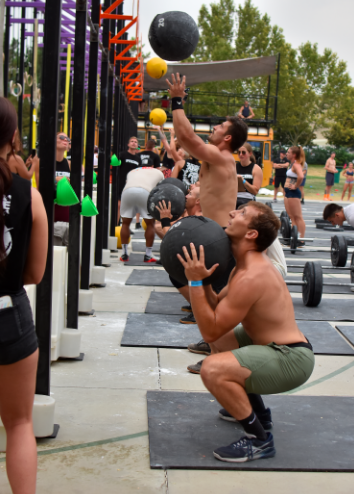 For the first time since its conception in 2014, Utah’s FitCon was hosted at Thanksgiving Point, and the event was extremely successful, bringing fitness enthusiasts, athletes and vendors together.

Dallin Rogers is the former owner of Lehi’s Ace’s Athletics, a former personal fitness and volleyball club that was located next to Thanksgiving Point. A fitness fanatic, Rogers had the idea for a fitness convention to bring athletes from across Utah together for one large event. The convention started small but has grown every year since its beginning. The event was first hosted in the South Towne Expo Center and then switched to the Salt Palace Convention Center in 2016. Due to restrictions from the COVID-19 crisis, Rogers decided to move the event outdoors this year to Thanksgiving Point. “Our feedback has been phenomenal,” says Rogers, “we are definitely considering having the event outdoors from now on because people loved it so much.”

FitCon is a high energy event, or convention, showcasing many forms of physical fitness from powerlifting to Muay Thai to ax throwing. FitCon also hosts celebrity athletes for fans to meet and greet and pose with for photos. There was also a large variety of local vendors selling everything from fitness supplements to athletic wear and training aids.

The event was capped at 12,000 attendees due to social distancing guidelines. With 2,000 athletes, vendors, and employees, 10,000 guests were allowed to enter. Each of the 12,000 people were temperature-checked before entering the outdoor expo. “Our main purpose here is to showcase that these events can happen and that we can help get back to normal,” said Rogers.

The expo was also offered online with live screening and behind the scenes footage available for purchase. As a father of two with wife Victoria, Rogers is proud that management of FitCon is now his full-time job and has already started planning next year’s event.

Voters to decide future of Utah County government with Prop 9