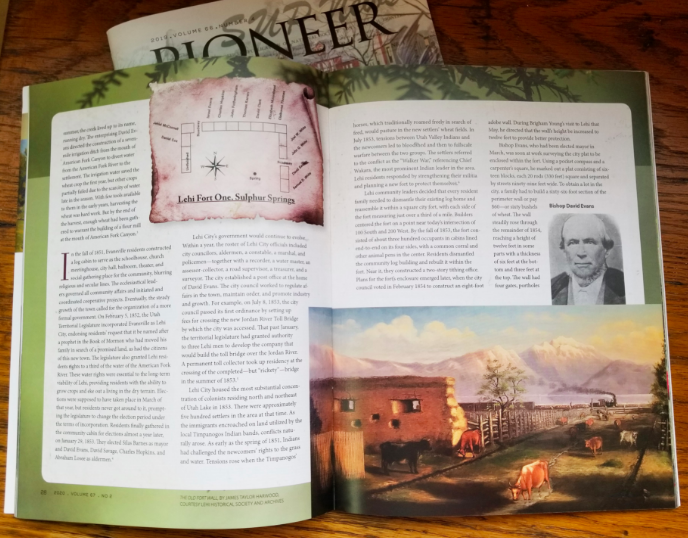 It’s a documented fact that children who know their family’s history have a stronger sense of control over their lives, higher self-esteem, and feel their families are more successful. (Duke and Furish, Emory University). Large corporations have built fortunes connecting individuals with their ancestors. Our community includes groups who have taken up the charge of collecting and documenting the stories and pictures of Utah’s pioneer heritage. These organizations are the Daughters of Utah Pioneers (DUP) and Sons of Utah Pioneers (SUP).

The mission statement for the SUP is: Come to know our fathers and turn our hearts to them. Preserve the memory and heritage of the early pioneers of the Utah Territory and the western U.S. Honor present-day pioneers worldwide who exemplify these same qualities of character. Teach these same qualities to the youth who will be tomorrow’s pioneers.

In July 1907, descendants of Utah’s pioneers organized the Sons and Daughters of Utah Pioneers. Senator and Church of Jesus Christ of Latter-day Saints Apostle Reed Smoot took the lead in forming the organization, Church President Joseph F. Smith addressed them at their first meeting. Several years later, women under the leadership of Annie Taylor Hyde, had already organized the International Society of the Daughters of Utah Pioneers. In 1935, there were 2000 members of the SUP organized into 69 “camps,” or geographic areas.

There are 37 chapters of the SUP in Utah, four in Idaho, and other chapters scattered throughout the U.S. The organization has been responsible for collecting and preserving thousands of histories and documents important in the history of the settlement of Utah and adjoining areas. The organization has overseen the placement of monuments and markers at many historical sites across the western U.S. including financial support for the construction of This Is The Place Monument at the mouth of Emigration Canyon. Other important monuments have been placed at the Mormon Pioneer Memorial Bridge in Omaha, Nebraska, monuments to Daniel L Jackling, Thomas L. Kane, Eliza R. Snow and Karl G. Maeser in the Utah State Capitol building. Monuments at various sites along the Mormon Battalion trail have been constructed among many other markers of significant events in Mormon history.

The SUP also publishes a magazine, Pioneer.  The beautiful four-color glossy magazine is published bi-monthly and contains iconic stories of pioneer feats and foibles. The articles are a joy to read. Publisher, Dr. William Tanner said, “We have just started a series of publications on the settlement of Utah County. The first issue features the history of the settlements of Lehi, American Fork, Pleasant Grove, Provo, and Alpine, along with articles about the Fairfield District School, Harrington School, and the Alpine Stake Tabernacle.” The publication is a must-see for members of these communities.

The magazine has lush illustrations, historical photos and vignettes. Subscriptions are available to the public and can be purchased for $25 per year or $45 for two years. Subscription information is available at www.sup1847.com or by calling 801-484-4441. The magazine would be a valuable resource for any family wishing to inspire a love of history in their children.

Lehi has been fortunate to have dedicated men and women who have cherished their pioneer heritage and have organized to create histories, monuments, and publications to preserve Lehi’s unique history. Currently, there are 48 members in the Lehi Chapter of the SUP. Mike Paulos is the President.

Through the years, the Lehi chapter has collected funds through donations to fund scholarships for high school seniors. The chapter has funded and erected monuments and markers to pioneer families and early pioneer buildings in Lehi that shaped the character of our city. Some are Snow Springs Camp, the Sugar Factory, Christofferson Historical Farm, Peck and Russon Family Monument, Kirkham Bros Pioneer Homes (4), Lehi Music Hall and the restored log cabin at the Hutchings Museum.

Lehi is fortunate that inspired leaders and people with vision and foresight have contributed time, money, and passion for the preservation of Lehi’s past. Their contributions will bless the lives of those of us who wish to learn from our history and want our children to feel a connection with ancestors from early times. Learning histories of courage, faith, and dedication of those who came before will enrich the lives of this generation and generations to come.