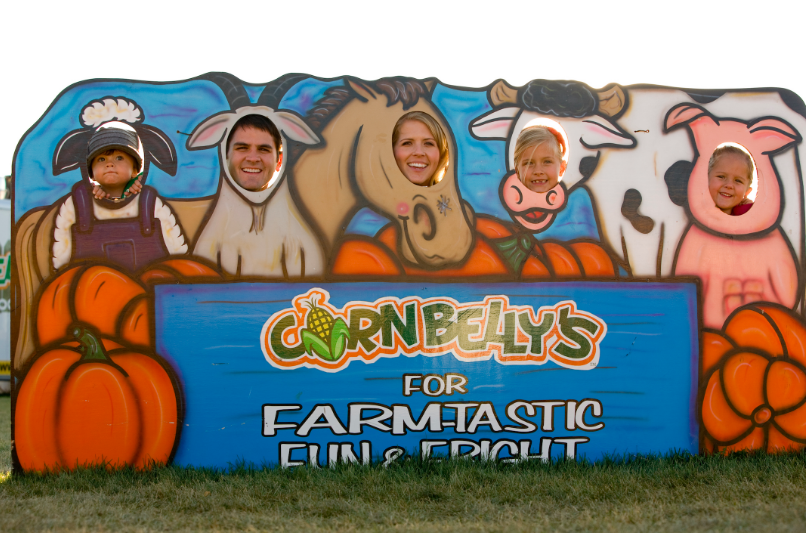 A Lehi fall favorite, Cornbelly’s, is prepping to open its gates to customers on Friday, September 25, a fitting date because Cornbelly’s is celebrating its 25th anniversary this fall.

Cornbelly’s is a fall festival that first began in 1996 as a corn maze created by Brett Herbst, a Brigham Young University agribusiness graduate who grew up on an Idaho farm. Now Cornbelly’s features more than 3,600 mazes, a Guinness world record and seven countries later, Cornbelly’s has seen millions of people around the world get lost in corny creations. Whether guests come for the intricate corn mazes, to go on a hayride, or to pick out their own special pumpkin, this fall experience has something to make every age smile.

In light of the COVID-19 crisis, the staff at Cornbelly’s has taken steps to ensure the safety of their guests. These steps include sanitizing stations, employee temperature checks, capacity limits, and more. “Keeping everything sanitized and cleaned is a high priority,” said Kamille Combs, Cornbelly’s marketing and events director. Cornbelly’s has removed several attractions that are too difficult to keep sanitized during this pandemic. These attractions include day and night Halloween Parades, Candy Cannon, Corn Cob Beach, Corn Ball, the Large Zipline (permanently discontinued), and Cole’s Corral/Friendly Fire (permanently discontinued). However, new attractions have been added that are safe and exciting for guests. These attractions include Peacock Perch, “Magic of Halloween” Evening Light Show, a carousel, an entertainment stage, a Trick-or-Treat Scavenger Hunt, and a Scarecrow Band.

Cornbelly’s has also officially partnered with Disney for a Toy Story collaboration for this year’s festivities. Toy Story is also celebrating 25 years in November 2020. The infamous corn maze will be designed with a Toy Story theme and characters will be woven throughout the park as well. Cornbelly’s will also be celebrating with a “dress as your favorite character day” to incorporate the Toy Story theme. “It felt like the perfect partnership because every age loves Toy Story,” said Combs.

An evening light show was suggested at the beginning of quarantine as a drive-up option for guests in a last-ditch effort in case Cornbelly’s wasn’t able to open at all. Delighted to be able to host a normal season, Cornbelly’s has embraced the idea of a light show and taken it to the next level.

The light show is about 15 minutes long with a combination of pixel lighting, spotlighting, and projector mapping, using the same technology Disneyland uses to project images on their castle. The show will occur each night with a bonus of a firework show incorporated into the light show on Friday and Saturday nights.

State guidelines indicate that Cornbelly’s is capable of hosting up to 6,000 people at any given time. “That’s pretty similar to what our weekdays are,” said Combs, “and since we anticipate fewer church groups and scout groups, we think the group numbers will go down and this will not be a problem on weekdays.” An online reservation system will be used for season pass and day ticket holders as well as ticket booths available for guests upon arrival.

Lehi residents have wondered if this will be Cornbelly’s last year at Thanksgiving Point. Combs said, “I think Cornbelly’s is here for many, many years to come, hopefully, another 25 years. The land we are on may eventually be sold and we would move to our home farm in Spanish Fork, but they [Thanksgiving Point] haven’t given us any indication at all that the land has been sold or anything.” This year, season pass holders will be able to visit the “home farm” in Spanish Fork with a $5 voucher to pick their own pumpkin. “It’s a wonderful escape to the countryside, it’s a very different but awesome environment,” said Combs.

Excited for the fall festivities to begin, Combs reminisced on the unusual year, with gratitude that this Lehi favorite event will be allowed to operate as usual. “We’ve all had to sacrifice a lot this year,” said Combs, “and we’re hoping that family traditions like going to Cornbelly’s will be able to continue forever.”