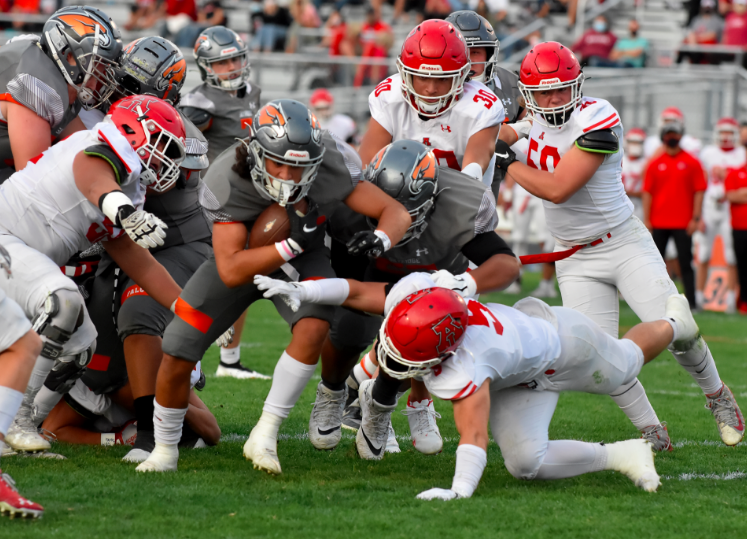 The Skyridge football team opened Region 4 play with a big win at home on Sep. 18, handily defeating previously-unbeaten American Fork 41-9 by shutting down a Caveman offense that came into the contest averaging 51 points per game.

With a quick start and a dominant rushing attack, the Falcons picked apart American Fork’s strong defense. Skyridge rushed for four touchdowns, three of them by junior running back Jeter Fenton, the other from sophomore quarterback McCae Hillstead.

Hillstead also threw a touchdown pass to senior wide receiver Mitch Adamson, while senior defensive end Stone Mulitalo returned an interception for a score. It was a good night for the Falcons.

“I saw the quarterback’s eyes turn towards me and before I heard our linebackers call that little motion from the running back, I knew the ball was coming somewhat of my way and so I just jumped and the ball came straight to me,” said Mulitalo.

“It was really hard and I almost dropped it at first, but I caught it and just started running once my feet hit the ground,” he added.

Just as the Cavemen began to gain momentum in the second period, Mulitalo got his pick-six to empower the Falcons for the rest of the game.

Fenton scored again in the second quarter and the Falcons finished with a 27-9 lead at the half. After a scoreless third quarter, Skyridge sealed the victory with touchdowns by Hillstead and Fenton.

Hillstead said, “It was a good game. Our defense put up huge stops against a good offense and our run game was essential to our win. Our running back did great and the O-line got a great push the whole night.

“American Fork is a great team and we just rallied and beat them. It was an overall great performance by everybody,” the quarterback concluded.

Falcon offensive coordinator Joel Lira said, “Hillstead is the hardest worker. I have worked with him for a long time. He’s hungry and he wants to learn. He wants to get better and improve. It doesn’t matter if he throws for 500 or we run as a team for 500, he wants to win.

“That is ultimately what it takes to be great.” He added “Fenton ran like a dog. He stepped up in a way that we needed him to.”

Falcon center Dallin Richards said, “We started off really fast and we knew they were going to come out strong. American Fork is a really good team but we knew if we played like us we would take it. Offense played hard and dominated. We kind of slowed up a little bit and had to refocus and came out pushing.”

“I feel great. Defense came ready to play and offense did their job throughout the game. I think our preparation this week was on point, we were ready for this tonight. We had to fight through the ball on every play,” said Lambert.

Skyridge Head Coach Jon Lehman said, “I’m really proud of our defense guys in general for digging in and really defending a great offense. Both the execution from the secondary and our front guys in getting pressure and stopping the run.

“I thought it was a real complete game from those guys from top to bottom. Smith Snowden had some tough matchups all night and he made some awesome plays. Our safeties do so much to get us in the right stuff. They were really in control the whole game.”

He added, “Offensively, we kept them off the field. We put some really nice long drives together and one of the keys to the game, which we knew going in, was red zone efficiency. We scored in the red zone. We got a couple of really timely stops in the red zone. I was really proud of our guys tonight.”

The Falcons will go into the second week of region play with a 6-0 record and a number one state RPI 6A ranking.