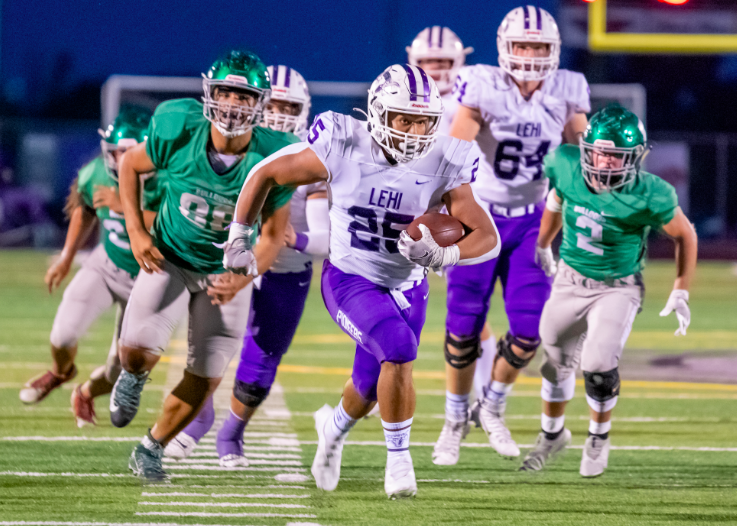 After a slow start, the Lehi football team combined inspired defense and opportunistic offense to earn a 35-21 victory at Provo on Sep. 18.

The first quarter ended in a scoreless tie with the Pioneers on the move following a 12-yard reception by senior wide receiver Grady Gonzalez which set the Pioneers up at their own 38.

On second down, senior quarterback Creyton Cooper connected with senior tight end Josiah Westover at midfield. The ball was advanced to the Provo 22 by a pair of penalties on the Bulldogs and Gonzalez collected a touchdown pass from there at the 10:04 mark of the second quarter.

Senior kicker Carson Weber added the PAT to give the visitors the first lead at 7-0. This was the start of a very productive evening for Gonzalez, who finished with eight receptions for 108 yards.

The Bulldogs were hampered by good defense and their own mistakes on the next possession and Lehi got good field position to start the next series, which was again aided by a big Provo penalty on the way to the 28-yard line.

On 3rd-and-10, senior running back Takeshi Faupula took it across from there, breaking tackles and eluding defenders on his way to the end zone. The PAT made it 14-0 with 7:07 remaining to the half.

This time the Bulldogs responded with a successful push of their own to cut the deficit to a single score with 3:23 left.

Provo was on the march again as the clock was running down but the threat was snuffed out when sophomore defensive back Nathan Anderegg made a great interception in the end zone to preserve the lead going into the locker room.

The Bulldogs got the ball to start the second half. A big return on the kickoff and a penalty gave them a short field to work with and they evened the score less than four minutes into the period.

Then it was Lehi’s turn to try to break the deadlock. Faupula got the call again and reached the target after a 32-yard run to give the Pioneers back a lead they would not relinquish with 4:11 left in the third quarter.

Provo’s defenders were showing signs of fatigue as the fourth period began and Lehi was able to capitalize. Faupula broke free on the left sideline and sprinted 58 yards for his third touchdown of the game, increasing the advantage to 28-14 with 9:51 to play.

“He showed us something we hadn’t seen before in this one,” said Coach Ed Larson. “He had a little extra burst going through the line. He stepped it up for us and this was definitely his night. Our backs seem to be taking turns with their output.

“He’s a great young man and a great team player. He’s also a good blocker and has fulfilled that role well for us,” the coach continued. “Chandler Jenkins (senior running back) did a great job blocking for him in this game.”

The next Bulldog drive ended with a pick by senior linebacker Brock Love inside the red zone, but Provo got the ball right back with an interception two plays later and pulled within a single score again with 5:36 left to play.

On the subsequent kickoff, sophomore Kadiyon Sweat once again electrified the Pioneer faithful with a 40-yard runback, part of his 99-yard total gains for the night.

Another big catch by Gonzalez helped move the ball forward, and Westover collected a short touchdown toss to finish the tally for Lehi at 35-21 at the 2:59 mark.

Anderegg made a spectacular deflection in the end zone to extinguish the final Bulldog scoring attempt with 40 seconds left on the clock. It was his third deflection of the game, and he added five solo and two assisted tackles to those and his interception for a notable defensive outing.

“My hat’s off to Provo,” Larson said. “They gave us everything we could handle and more. They used a new defensive formation in this game and it took us a quarter to figure it out.

“We’re still having our issues in defending the run but we did keep the ball in front of us,” the coach continued. “We need to continue to do that and get better. Overall we seem to play to the level of the competition and we need to be more consistent.”

He was pleased with how the offense was able to drive the ball in the second half but knows his team can’t wait that long to get started against Timpview, this week’s opponent.

“We’re still searching for that one magic night when we put it all together,” Larson said. “We’re crossing our fingers for this next one.”