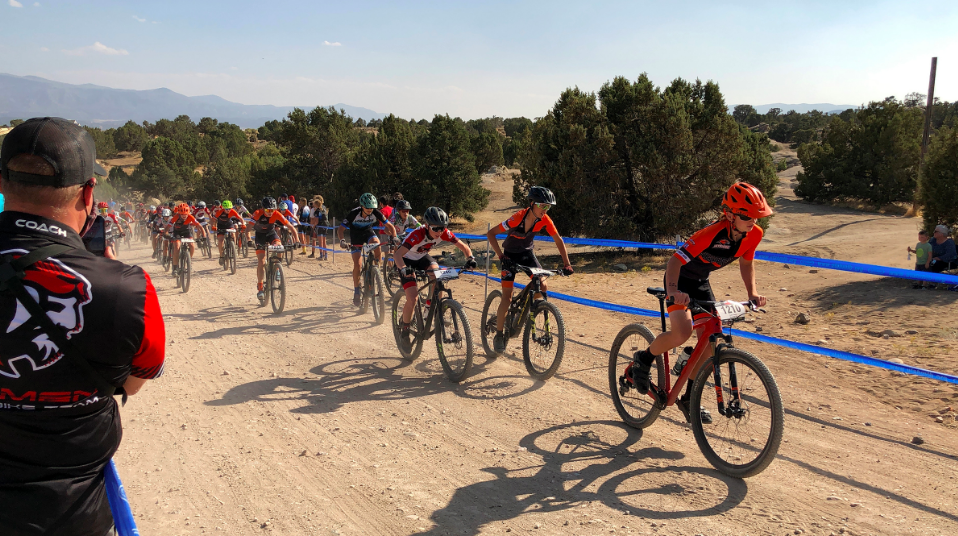 The Falcons can’t seem to quite get over the hump against a deep American Fork squad and fell short this time 4598-4584 after another intense battle.

Juniors Sam Gardner was fifth and Porter Hales sixth in the Varsity Boys race. Senior Brelynn Draper was seventh in the Varsity Girls event. These three were the top points contributors for Skyridge on this occasion.

Lehi senior Ethan Adams finished a close third in the Varsity Boys race. Senior Ashley Gonzalez came in second for the Pioneers in the Varsity Girls race. Adams and Gonzalez continue to be the top points contributors for Lehi.

It was the final event of the season for the junior teams, who placed well in many of the divisions along with their older counterparts.

Those earning a spot in the top five in each race are honored on the podium. Local competitors who earned this distinction are listed below. The grade level of the participant is shown in parentheses and results are given in the order of the races at the event.

Will Nicholson (9), fifth in Freshman B Boys D1

Team scores are cumulative points awarded for top results in varsity and JV races. There are developmental events for those in grades 7-9.

Participants were drawn from grades 7-12 and are assigned to divisions by grade and experience level. There were 1104 entrants in this event.

In his own words, life’s lessons learned on a bike

On Saturday, hundreds of mountain bike riders from Lehi gathered to race the Three Peaks Trails in Cedar City. There were wind gusts of over 30 mph but there wasn’t anything that Mother Nature could do to keep these racers from doing what they love the most.

It was a day that the Skyridge High School team and the Skyridge Junior Development team had been working for all summer.

Racers wake up at zero o’clock in the morning to be at practice at 6 a.m. It’s hard to explain how coaches get kids in high school and junior high to get up early during the summer, but if you were at the race on Saturday, you would understand.

The excitement for the sport of mountain biking, the positive atmosphere, and some very nice bikes create an amazing experience for everyone involved.

Races start at 8 a.m. and waves go through the day until the awards are handed out on the podium just before the sun goes down.

This is an all-day event with life lessons happening throughout the day and the opportunity to teach those lessons is what motivates the coaches to endure the heat, wind and dust.

The course is 5.8 miles long and has a 384-foot elevation gain. Racers do laps based on skill level with categories going from one lap all the way up to four laps.

At the end of the race are some of the most priceless experiences that one could ever imagine in any sport. Racers push themselves to levels they’ve never experienced before, and it all comes to the surface at the finish line.

Some racers cross and then collapse into their coach’s arms. Some cross with incredible jubilation and some have no idea how to reconcile their emotions.

It is common to see a coach kneeling in front of a sweaty, dirty and exhausted racer asking how she or he feels.

And then it happens, all of the rarely felt and almost never seen emotions boil over. Tears are abundant at the finish line. All are good tears and all have a different origin. Some tears come from overcoming personal or health challenges. Some come from proving doubts can be conquered and some riders have never been the focus of thousands of cheering spectators.

These life lessons can’t be taught in the classroom or read in a book. Saturday was more than just a bike race, it was a day where hundreds of our youth from Lehi grew up a little bit.

Jason Taylor is the head coach of the Skyridge Junior Development Team.