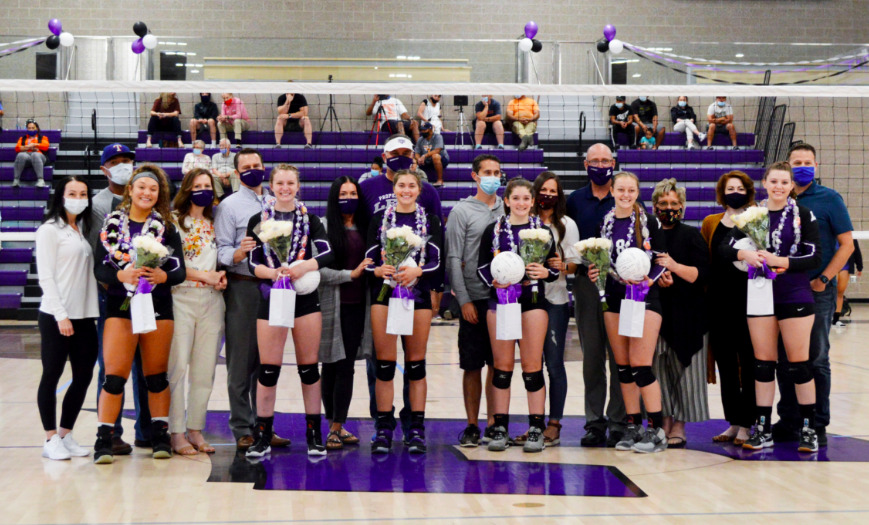 The Pioneer volleyball team improved to 2-1 in Region 7 as they fell to Mountain Ridge 3-2 in Herriman on Sep. 15 and won a barnburner at home 3-2 over the Timpview Thunderbirds on Senior Night Sep. 17.

In the first set on Sept. 15, Lehi led throughout the first set against the Sentinels, never letting them get within striking distance and finishing with a score of 25-19.

Lehi came roaring back in the third set and junior libero Bailee Holland sealed the 25-17 victory with three service aces in a row.

The fourth set against Mountain Ridge was the closest of the five, the teams trading leads or tying the score throughout the game. The Sentinels eventually closed it out 25-23.

The Pioneers couldn’t get back into their rhythm for the final set, losing to Mountain Ridge 15-8.

Shewell and junior opposite hitter Millie Gibson both had double digit kills with 19 and 12, respectively. Holland had 39 serve receptions and 16 digs. Senior setter Macey Faddis helped her teammates with 29 assists.

Each one ran under a balloon arch in Lehi colors and through a gauntlet of teammate high-fives before standing with their parents in front of the net to be introduced.

“I have been coaching those seniors since they were freshmen. They have grown and progressed so much over the years not just as volleyball players but as young women as well and I couldn’t be prouder of each of them. They have learned how to be good communicators and leaders and have shown to me time and time again that they can do that at a high level,” said head coach Kolton Rader.

The Lehi crowd was loud and proud, with the student section on their feet for all five sets against Timpview. Johnny Revill called the game from the scorer’s table, adding to the excitement. The Thunderbirds brought their own noisy entourage and the gym felt like pre-COVID days for a few hours. “I had to move because I couldn’t hear sitting near the student section, which is great,” said one Lehi parent.

The Pioneers were unstoppable in the first set, getting off to an early lead. Junior outside hitter Ajah Rajvong and Shewell took turns finding open seams for kills. Lehi won the first set 25-15.

The second set started the same as the first, with Lehi in the lead and electric team energy. Junior setter Paia Kaohelaulii made an impossible pancake save that set up Shewell for a kill the Thunderbirds didn’t see coming, putting the score at 21-14.

Timpview went on a short scoring run, but they couldn’t catch the Pioneers. Millie Gibson’s kill made it set point for Lehi and senior outside hitter Haylee Holker brought home the set win with another shattering kill.

For the first half of the fourth set, the two teams were neck-and-neck. Macey Faddis caught the Thunderbirds off-guard by dumping the ball straight over the net instead of passing it to one of the outside hitters and the ball hit the floor untouched. Faddis pulled the same move again and again during the match with the same results. Timpview came away with the win in the fourth game 25-15, which led to an intense fifth set.

The Pioneers jumped to an early 4-0 lead. The whole team was focused and precise, playing every ball like it was game point. Shewell and Bailee Holland went after a loose ball together and slid halfway to the door chasing it down. Lehi gave up the lead, but only for a moment. An epic kill by Shewell had the hometown crowd on their feet and the Pioneers were up 10-7.

Senior libero Marlee Lotaki came off the bench to serve and the Lehi crowd got so loud cheering for her that Timpview called a time out to quiet everyone down. With just two points to go for the win, Shewell threaded the Thunderbird defense with a kill just inside the line and on a Timpview player’s foot. The Timpview bench erupted at the call and players from both teams went to the referees to plead their cases.

The point was awarded to the Pioneers and it proved to be the final blow for the Thunderbirds. Lehi won the set 15-12 and the match 3-2.

“We are both good teams who want to win and it always seems to be a tight match up,” said Rader. “We are just glad to have walked away with a good win and are looking forward to playing Orem and Timpanogous this week.”