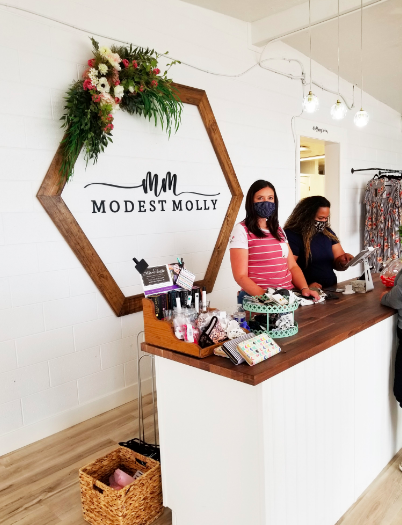 Only three years ago, customers were trying on clothes in Amanda Hart’s kitchen pantry. Now she and her partners’ Allison Harper and Lindsay Gardner’s growing business is in their third Lehi location. Modest Molly had a grand re-opening at 255 E. State Street on Sept. 19, in a more spacious place after being on Main Street for over a year.

“This started as a fun hobby. I was having a hard time finding cute, conservative, affordable, plus-size clothes for me. I was really shopping for myself at first,” said Hart. Modest Molly started as a Facebook shop, and customers would order clothes online. Hart found many friends and neighbors in the same situation looking for fashionable clothes, and soon she recruited her friends, Harper and Gardner, to help ship orders. She was selling clothing out of her home, which is how her pantry became a dressing room.

“I decided if this was going to be more than a hobby, we needed to get a place,” recalled Hart. The women found a small brick and mortar store on Main Street in Lehi. Modest Molly was only on Main for a year before they outgrew that space.

“We really wanted to stay in Lehi because we all live here, and we want to stay close to home,” said Gardner. They met and became friends because they were neighbors, and the friendships have only become stronger over the years. Between all three, they have 13 children. It hasn’t always been easy to run a business and manage households at the same time. “My kids have learned how to be independent with me working. They make more messes, but I think they’re more responsible, too,” added Harper.

The new Modest Molly digs are in a former dance studio with plenty of square footage for a beautiful store and an attractive sitting area for customers. “I’m really happy with the way it turned out – it’s just like we pictured it,” said Gardner. “We wanted to create an experience when people come to the store. We want them to hang out with us,” said Hart.

About 75% of the Modest Molly business is online, and they ship all over the country. The Lehi shop is for customers who need to see and feel their purchases in person. Online orders increased dramatically when people started quarantining in mid-March. “We’re really lucky we could stay in business and even thrive during such a hard time,” said Gardner.

Hart, Gardner, and Harper do live Facebook videos twice a week to show customers new arrivals. Each of the women try on the clothes and model for the camera.

“Customers like the videos because they can tell what it’s going to look like on them if they have a similar body-type as one of us. We’re very honest about the fit and whether or not they might want to size up or down for certain items,” explained Hart.

“We don’t get many returns because of those videos. People know exactly what they’re getting,” said Gardner. “I think it was comforting to people that we just continued, as usual, doing videos when the pandemic hit. It was nice to have something normal during the weirdness.”