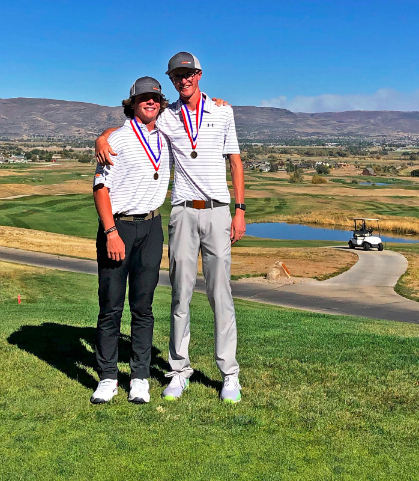 The Skyridge boys golf team came in third in the final two Region 4 meets of the regular season and finished in third place overall in league play.

The Falcons also had two individual golfers who earned medals for the season. Carter Frisby earned the bronze position with a 71.3 scoring average and Eli Beck placed fifth with a 71.5 average.

At Glenmoor Golf Course on Sep. 25, the team had four players shoot in the 70s to finish with a 302. Frisby led the group with a 71, followed by Luke Gibson at 74 and Beck and Gavin Hansen tied at 76.

In the final event at Soldier Hollow Golf Course on Sep. 29, the scores reflected the tougher course. Frisby had another fine outing with a 70. Beck followed him at 77, while Gibson and Lars Beck each posted an 83 to round out the tally.

The state tournament was Oct. 5 and 6 at Soldier Hollow. Check next week’s issue for the full results.