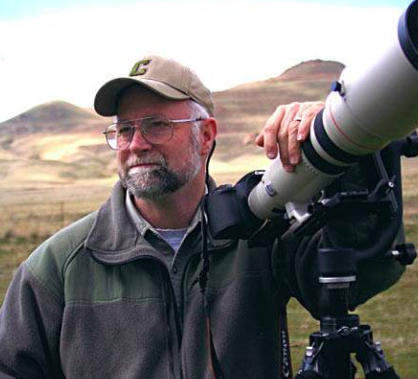 Kelly Thurgood has always had a love for wildlife. Over time, Thurgood has turned his passion into a hobby, and now a full-blown profession as a wildlife photographer, sculptor, and artist.

Thurgood grew up in Orem, Utah, until high school when he met his sweetheart, and now wife, Debbie. The two have lived in American Fork for 43 years and have four daughters and 18 grandchildren. As a child, Thurgood spent afternoons in the Geneva wetlands playing with friends and became interested in the wildlife he saw surrounding Utah Lake. Thurgood and his friends would also hunt ducks near the lake, and when he was 16, a shotgun blast went off next to Thurgood’s ear, taking 80% of his hearing instantly.

After high school, Thurgood began his life in the professional world, working in the sporting goods business and quickly moved to Allen’s camera shop. Unfortunately, he lost his job selling cameras due to his inability to hear. However, the job allowed him to work with advanced equipment and honed photography skills at work. Thurgood began spending free time capturing Utah’s wildlife in action, snapping his camera constantly at everything he saw. Even today, Thurgood says there are afternoons when he and Debbie will go out looking for animals to capture and will come home with over 3,000 photos.

As a youth, Thurgood recalls his parents giving him tools instead of toys for birthdays and holidays. Thurgood developed skills in word working from a young age. He bought a cabinet shop in Provo called Custom Cabinet Designs and has operated the shop for over 39 years. Thurgood creates beautiful cabinets and furniture for large Park City cabins and has even worked with a few celebrity clients.

Working with wood sparked an interest in Thurgood to transform photography into something more tangible. It was not long before he started spending every free moment sculpting wood into owls, ducks, and wildlife creatures, which become incredibly realistic works of art.

Thurgood recalls a client coming into the woodshop one day asking for a wooden toilet paper roll holder. Far from his regular product, Thurgood happily made the roll holder and offered it to his client free of charge. Not willing to accept the kind gesture, the customer brought in a collection of sketches to pay for his piece and Thurgood was astounded to realize the client was Clark Bronson, a wildlife artist that Thurgood had tried to emulate. Bronson and Thurgood quickly became best friends and have since traveled all over the world together, taking photos and sketching wildlife side by side.

Thurgood has put in his 10,000 hours and has become widely recognized for his accomplishments as an artist. The Monte L. Bean Life Science Museum at BYU and the Hutchings Museum have both showcased his work.  A large sculpture of Thurgood’s is on display outside the visitors center at Antelope Island. His works have also been featured at art galleries in Jackson Hole, San Francisco, and in the Provo Riverwoods.

Thurgood’s clients and family cherish his pieces and are always asking for new and intriguing works of art.

One of Thurgood’s favorite pastimes is creating intricate wands based on the Harry Potter films for his many grandchildren.