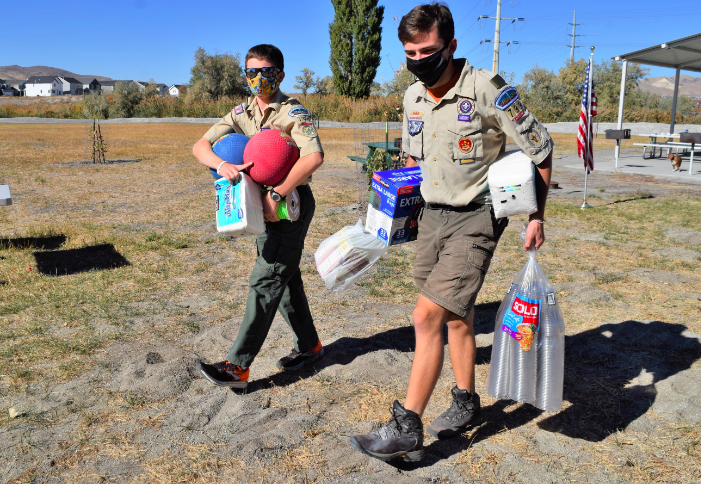 Anyone jogging by Willow Park on the Jordan River Trail on Saturday morning, Oct. 17, had the rare pleasure of seeing a Scout troop in its natural habitat, pulling weeds and trimming wayward tree branches. Lehi-based Scout Troop 799 had a citizenship-focused weekend at Willow Park that included a talk from Mayor Mark Johnson, camping and cleanup.

“It really is imprinted in the culture of this troop to look for ways to serve our community. The service may check a box or help them advance in rank, but we really love it, too,” said Greg Jackson, a pack leader with two children in Troop 799.

Beginning Jan. 1, 2020, The Church of Jesus Christ of Latter-day Saints ended its century-long partnership with the Boy Scouts of America. The number of registered Scouts in Utah went from 400,000 to 7,000, and the BSA has been forced to make radical adjustments to its programs. Troop 799 started as Pack 799 with Angela Walker. Boys and girls in Lehi who love scouting and wanted to keep going in the program have found their way to community troops like Troop 799, and their number continues to grow.

“This is an impressive troop,” Jackson said of Troop 799. “Everyone wants to be there. The kids and leaders are all enthusiastic and engaged. It makes a real difference.”

Jackson found Angela Walker’s new Pack 799 for his eight-year-old son, but his 10-year-old daughter Lyla joined after tagging along to a few meetings with her dad. “She thought what we were doing was cool and she wanted to join,” Jackson recalled. The BSA, now officially “Scouts BSA” because of a trademark on Scouts of America by the Girl Scout organization, began including young women in February 2019. Lyla was the only girl Webelo and she earned her Arrow of Light in Pack 799. An all-girl pack in Troop 799 was organized just before Lyla’s 11th birthday, and she is one of the youth leaders in the troop. The handbook for boys and girls in Scouts BSA is exactly the same, except for the pronouns.

There are approximately 50 Scouts in Troop 799, and they had a good turnout for the Willow Park cleanup. They listened intently to Mayor Johnson’s talk about citizenship on Friday night. “Of course the mayor was great with the kids. They wanted to shake his hand afterward, but we did elbow bumps instead,” said Jackson.

Besides having drastically reduced numbers, Scouts BSA has had to make changes to safely camp during the COVID-19 pandemic. Troop 799 camped in patrols at Willow Park, not as a troop. Each Scout was in a separate tent, masks were worn at all times and temperatures were taken upon arrival.

The Scouts filled a massive Lehi City Parks and Recreation truck with orange bags of debris and garbage, representing hundreds of man-hours of work. “The Scout Oath and laws are about values. They’re learning now to serve and be involved in their community,” said Jackson.