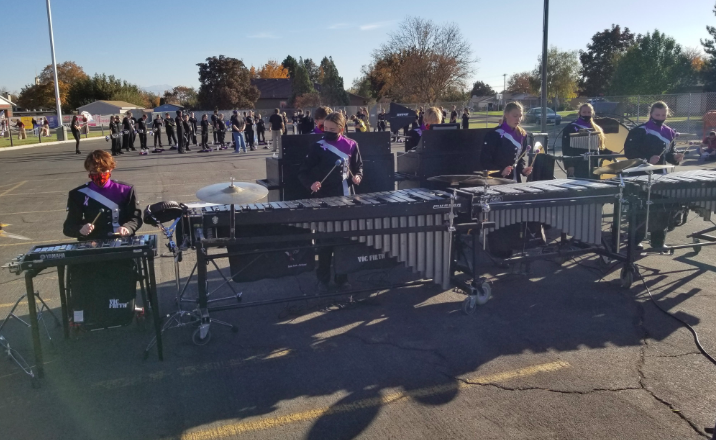 Lehi High School student Hope Holt went from playing percussion in the marching band and practicing for the state competition to being paralyzed from the waist down within 24 hours on Sept. 29. After 31 days at Primary Children’s Hospital, Hope competed with the marching band from a wheelchair on Oct. 31 and helped them take third place.

On the morning of Sept. 29, Hope Holt woke up with a stiff back. She chalked it up to sleeping in an awkward position and did her best to stretch out and pop her back. Instead of hearing a pop, Hope had a burning sensation in her right thigh. She wasn’t concerned, though, and continued to get ready for school. By the time she got to school, Hope’s right foot was numb. Only a few hours later, the 16-year-old was at Utah Valley Hospital paralyzed from the waist down.

Doctors at Utah Valley diagnosed Hope Holt with a spinal infarction or a spinal stroke. They went to Primary Children’s Hospital, where the diagnosis was confirmed, and Hope began the arduous physical therapy process.

“The physical therapists were impressed with how quickly Hope made progress. She has incredible core strength thanks to marching band,” said Hope’s mother, Becki Holt. Hope has had intermittent feeling in her legs and muscle movement, which is a promising sign for her future recovery, but the road ahead is difficult.

The Holt family has already experienced bumps in the road during the last month. Their car was stolen while they were at the hospital, and the whole family was quarantined when one member tested positive for COVID-19.

On Oct.31, Hope’s friends and bandmates rigged her instruments to help her play from her wheelchair for the state marching band competition. She didn’t have much time to review the music but played well and contributed to the band’s performance. “She is so strong and resilient. It really boosted her spirit to play with the marching band again,” said Becki Holt.

The Holts’ home has been retrofitted to allow for a wheelchair lift to the second floor where Hope’s room and bathroom are located, thanks to family and friends’ initial fundraising. A benefit concert will be held on Saturday, Nov. 7, to raise more money for Hope’s physical therapy and modifications to the car so she can drive.

“We want Hope to be as independent and mobile as possible. I remind her all the time that where she is now is not her future,” said Becki Holt.

“A Concert for Hope” will be live streamed on YouTube from the Lehi Farmer’s Market, 7431 N 8000 W at 5 p.m. and will feature local bands. Chick-fil-A, Kneaders, and Little Bread Boy have donated food, which may be picked up at the venue to ensure proper health and safety. The concert is free. Donors can make contributions to Becki Holt’s Venmo account, @Becki-Holt.