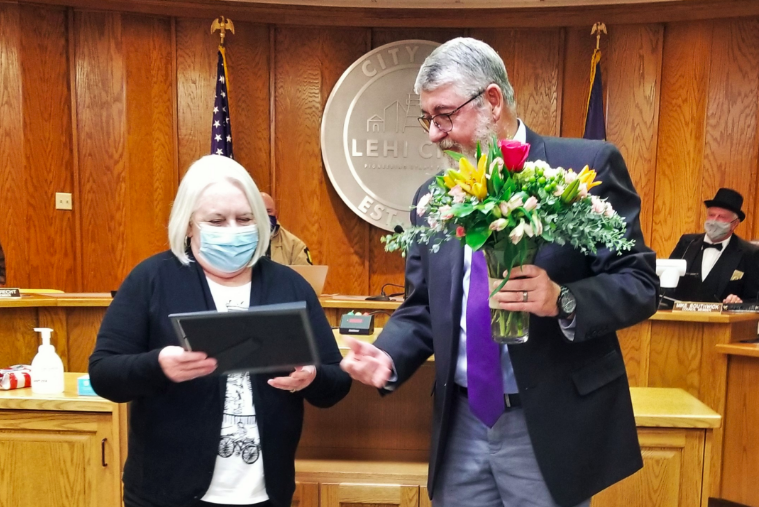 For the last 20 years, Lehi Arts Council Chair Jean Hatch has been behind the scenes of every community theater production and kids’ theater workshop in Lehi. Hatch has given her final bow as chair of the Lehi Arts Council (LAC), leaving the arts in Lehi much better than she found it.

“My first instinct when Johnny Revill asked me to take over as chair was to say ‘no.’ I was working full-time and helping direct Miss Utah at the time. Thanks to so many wonderful council members who have become family to me, it worked out. A lot of people put their heart and soul into providing art for this community,” said Hatch at a ceremony honoring her service during Lehi City Council meeting Tuesday, Oct. 27.

Jean Trinnaman Hatch grew up in Lehi and graduated from Lehi High School. She married Jerry Hatch in September 1972. Jean worked for the Mountainland Association of Governors in the RSVP program while volunteering in several PTA councils and the March of Dimes. She was the director of the Miss Lehi Scholarship Pageant from 1975-1977, as well as the Miss Utah Scholarship Pageant. Jean served as treasurer for the Lehi Arts Council from 1997-2001 and chair from 2004-2020.

Before Mayor Mark Johnson could read the full page of committees and boards on which Jean Hatch has served in Lehi, he said, “I don’t know what Lehi would look like without Jean Hatch. She’s been an integral part of the city for so long and she’s done so much for the city.”

“Jean got me back into the theater. When my kids were young, I stopped participating in shows, but she roped me into being a fireman in ‘The Best Christmas Pageant Ever’ one year,” recalled Kurt Elison. Elison will be replacing Hatch as chair of the LAC. “Jean always says yes. She finds a way to make things happen.”

“Jean Hatch has been the face and heart of the Lehi Arts Council for nearly two decades. Hundreds of citizens, especially kids, have participated in plays and workshops under her direction. The whole Lehi community owes her a great debt of gratitude,” said City Councilmember Paige Albrecht, who has worked on the LAC with Hatch for many years.

The children’s theater workshops have been a priority for Hatch over the years. “For some kids who are more withdrawn, or who have a hard time socializing, theater is where they find themselves. It’s where they make friends and gain confidence,” said Hatch in a 2018 interview with the Lehi Free Press.

“You have to be on your mark and meet your cues in theater. The cast is your family and they’re depending on you. You have to learn to take direction. Everything the kids learn here, they can apply to school, work and family life,” Hatch explained.

In 2004, Jean Hatch asked Ashley McKinnon to start the Children’s Theater Workshop at the Lehi Arts Center. Jean was always behind the scenes helping. “I didn’t realize how much she was doing for me! She would order the T-shirts, get a videographer, a million little things that need to happen for each workshop,” said McKinnon. “She is so creative and innovative with Jerry on the costumes and sets – she knows everything.”

“I’m sad to see Jean retire, it’s a real loss for the program. I’m happier, though, that she can retire and enjoy her grandkids,” McKinnon added.

“We’ve seen the lives of a lot of young people changed thanks to the arts. Once they get their feet under them in the arts, they can excel in every other part of their life,” said Hatch after accepting a plaque and flowers from the City Council.