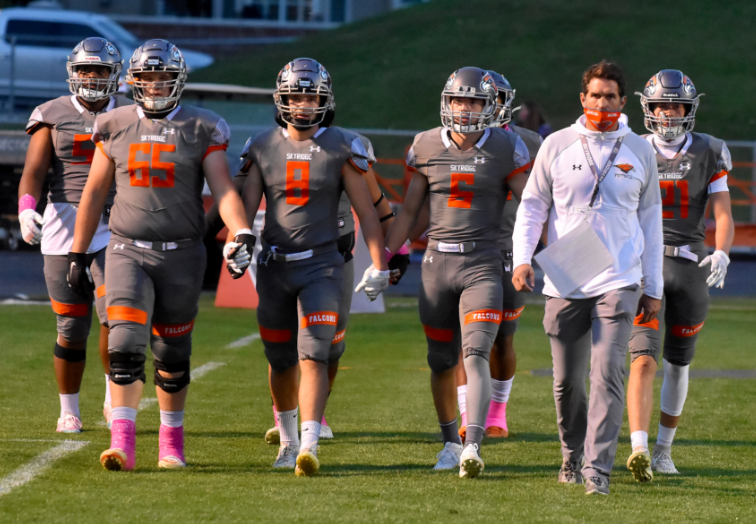 The No. 3 Skyridge football team had things right where they wanted them during much of the Nov. 12 semifinal against No. 2 Lone Peak, but errors in the final crucial minutes allowed the Knights to get the advantage 28-24 and hold on to eliminate the Falcons from the 6A state tournament.

The contest was played at a Cedar Valley High School in Eagle Mountain instead of the normal college venue due to the circumstances of the present health crisis.

The frigid temperatures did affect both the ball and the players as the proverbial “rock” acted like one in ways the teams had not had to deal with at any other point this season.

The defenses were expected to dominate the game and they did for the most part, although not at the same time.

Skyridge received the opening kickoff and started the first drive from the 24-yard line. After a couple of short runs, a third-down completion was called back on a penalty, setting up a 3rd-and-14.

Sophomore quarterback McCae Hillstead found one of his favorite targets, junior Jeter Fenton, and the Falcons got the first down and more. A second Fenton catch moved the ball into Lone Peak territory.

The team reached the red zone with the help of a pass interference penalty, but the Knight defense stiffened at that point and the possession ended with a blocked field goal.

Lone Peak didn’t get far on its first drive, converting on only one series. While setting up for a punt deep in their own end, the ball sailed over the punter’s head and was downed at the 10-yard line.

Fenton bulled forward for six yards on first down, and then senior wide receiver Mitch Adamson made a really difficult catch in the end zone with a defender right on his back to get Skyridge on the board. Senior Braden Buck’s PAT gave the Falcons the first lead 7-0 with 4:30 left in the first quarter.

The Knights took less than two minutes to even the score at 7-7 but had a tough time moving the ball for the remainder of the first half and didn’t score again before the break.

In the second period, Skyridge mounted a successful drive after a pair of fruitless exchanges. The Falcons appeared to be stopped at one point but were gifted a first down by a Lone Peak penalty. Adamson made another great grab to keep the momentum going on a 3rd-and-12.

A connection from Hillstead to junior wide receiver Connor McAllister and another Knight penalty set up a 3-yard Fenton touchdown run and the Buck PAT gave Skyridge a 14-7 advantage.

A terrific deflection by junior linebacker Tyson Stewart helped the Falcons to force a 3-and-out on the next Lone Peak possession, and senior TJ Ragigia busted a 14-yard punt return to position the ball just shy of midfield.

A spectacular diving catch by senior wide receiver James Palmer brought Skyridge to the 19-yard line and another completion to junior Teagan Calton got the Falcons even closer.

However, rushing efforts by Hillstead and Fenton were held to short gains and Skyridge settled for a Buck 23-yard field goal to make it 17-7 with 41 seconds left in the half. That’s where it stood as the teams headed to the locker room.

The Falcons dominated possession time nearly 2:1 and had 215 yards of offense in the first half but held Lone Peak under 100 yards. The Skyridge defensive effort yielded only four rushing yards to the opponent by that point and the Knights only converted on one of seven third downs in the half.

Lone Peak got the ball to start the third quarter and it looked like more of the same to begin with. A deflection by sophomore cornerback Smith Snowden helped hold the Knights to 3-and-out on that first series.

However, the Falcons didn’t get anywhere on their next possession either. The subsequent punt attempt was blocked and then returned to the 10-yard line, and Lone Peak ran it across the stripe in two plays to narrow the gap to 17-14 at the 8:54 mark.

The teams traded possessions after that. Later on, a 4th-and-3 attempt by the Knights close to the red zone was stymied by another Snowden deflection and the ball went over on downs at the 23-yard line at the 3:23 mark of the third period.

Skyridge had still not gained a single yard of offense by this point in the half. The next pass was completed but then stripped, and Lone Peak returned it to the 1-yard-line, scoring on the next play to take the lead for the first time 21-17 with 2:57 left in the quarter.

The defensive struggle went on as the ball continued to trade hands. In the final period, the Falcons got decent field position at their own 32-yard line and were able to continue the drive after a Knight penalty on a punt attempt.

After six straight incompletions following the break, Hillstead found Palmer at the Lone Peak 35 and he managed to hold onto the ball despite having his feet knocked out from under him while making the catch. It was the first Skyridge earned first down of the half.

Wasting no time, Palmer collected the next pass in the end zone too give the Falcons back a hard-earned lead of 24-21 with 6:34 remaining in the contest.

However, as if to emphasize how important each aspect of the game is at this level, the subsequent kickoff was returned 94 yards for the go-ahead score of 28-24.

Skyridge still had plenty of time and was able to move the ball in part with chunk plays by Fenton and Palmer, but a Hillstead pass was intercepted at the Lone Peak 19-yard line and the Knights held on to end the season for the Falcons.