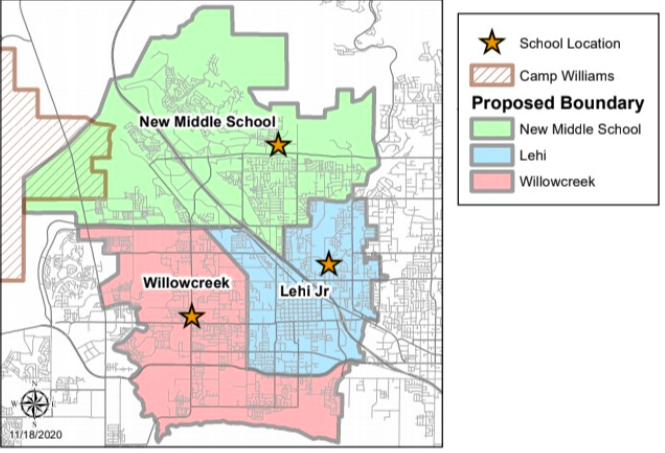 Lehi’s new middle school will be closed to students who live outside its boundaries, the Alpine School District Board of Education voted Nov. 24.

“I think it will help stabilize enrollment in that area, and it provides the opportunity for those who wish — where there is capacity — for them to attend,” Scott Carlson, the board’s president, said during the meeting. “I think it is a great choice.”

The board voted to close the school to out-of-area requests for the 2021-22 academic year and approved the school’s boundaries during a Nov. 24 meeting held virtually due to a surge in COVID-19 cases.

According to information presented at the meeting, the boundary proposal changed from the first one the district proposed based on feedback officials received from a survey and during an open house. The boundary proposal includes keeping all of Dry Creek and Eaglecrest Elementary schools’ students together as they move into middle school.

The yet-unnamed middle school is located in north Lehi, above Timpanogos Highway, near the Micron Technologies campus, and will open in 2021.

While the meeting’s virtual format didn’t allow the traditional opportunity for public comment over a podium, the board did solicit feedback via email. Carlson said he had received two emails from Lehi Junior High School teachers who wanted the school to stay at about 1,300 students.

“Both of them were concerned that if the school numbers were too low, it would make it difficult for them to offer some of the programs they are accustomed to,” Carlson said.

The teachers were also worried that fewer students could mean that other teachers with whom they are friends may get moved to other schools because there wouldn’t be enough students to justify the current number of employees.

He said the school had about 1,500 students a few years ago.

Carlson also said that families were reluctant to move schools because their students enjoy their current campuses.

Aaron Barth, the new school’s principal, said he was excited for a boundary to be in place, even if it means the school will open at its capacity.

Ada Wilson, a board member, said the district would experience a “middle school bubble” of enrollment, expected to ease up within a few years.

“It will grow, but it will be manageable,” she said.

Julie King, also a member of the board, pointed out that while the board decided to keep all of Dry Creek Elementary School’s students together as they flow into the middle school, the community may be impacted when the district eventually builds another elementary school in that area and Dry Creek’s student population splits.

Carlson agreed and said that nothing is guaranteed. Just because the district currently owns land in one location, he said, does not mean that a new school will be built, and the community should not make presumptions about where the district may split a school.

The board discussed the district’s enrollment numbers earlier in the meeting, reviewing information from an official Oct. 1 student count.