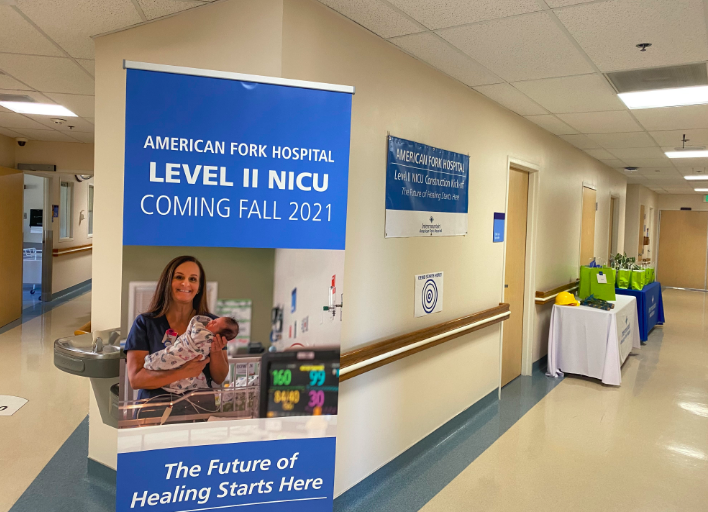 Among those celebrating is Jason and Chrissi Call and their 15-month-old son, Elliott, who was a patient in NICU last year. Elliott needed a double blood exchange transfusion when he was unexpectedly born early. Elliot is alive and well due in part to the expert care from Dr. Shaun Odell, American Fork Hospital’s NICU medical director, and the entire NICU team.

Official construction will start at the beginning of 2021 with plans to open at the end of 2021. The expanded NICU will increase bed space from 10 to 20 and provide private rooms for parents to stay with their baby during the care process.

“We care for about 24 babies a month in our NICU which equates to about 2,000 nights of a baby being cared for per year” said Jason Wilson, American Fork Hospital administrator. “With the construction of the Level II NICU, that number will increase from 2,000 nights a year to 5,000 nights a year. This is a meaningful change and meaningful impact to our community.”

Utah County’s rapid growth comes with a high demand for care and American Fork Hospital is one of busiest hospitals in the state for births. The expansion of the Level II NICU will help meet that demand and keep up with the growth in the surrounding area.

“We are the fifth busiest baby hospital in the state, and we are a community hospital. We bring around 3,000 lives into the world per year, about 8.5 babies per day enter this planet in this building,” explained Wilson.

“This expansion represents our effort to grow with the community and do even more,” he added.

The Level II NICU at American Fork Hospital will allow for the care of babies as young as 32 weeks gestational age who require additional care because of younger development.

Dr. Odell has been one of the many driving forces behind the construction of the NICU expansion. When he began working with the American Fork Hospital NICU he realized with the help of the capable and amazing caregivers who work there, they would be prepared to expand the space.

In addition, families will now have the opportunity to stay close to home while their babies are in the hospital. There are also private rooms for parents and babies, so children can bond earlier with their parents.

“We know that babies do better when they get to stay with their parents,” explained Dr. Odell. “That has to do with bonding, physiology and other things. The benefits are incalculable in terms of how those babies do clinically and in terms of the long-term bonding since we don’t have to separate parents and babies.”

Although there will be times that babies may need to go to larger facilities such as Intermountain Healthcare’s Utah Valley Hospital – such as younger gestational ages or for surgery – the expertise is the exact same at American Fork Hospital as it is at Utah Valley.

“We have seen miracles happen here. The population of the valley has grown significantly, and we have had to turn babies away because we were limited. Now we will be able to have more moms, dads and babies experience those miracles here at American Fork Hospital,” said Dr. Odell.