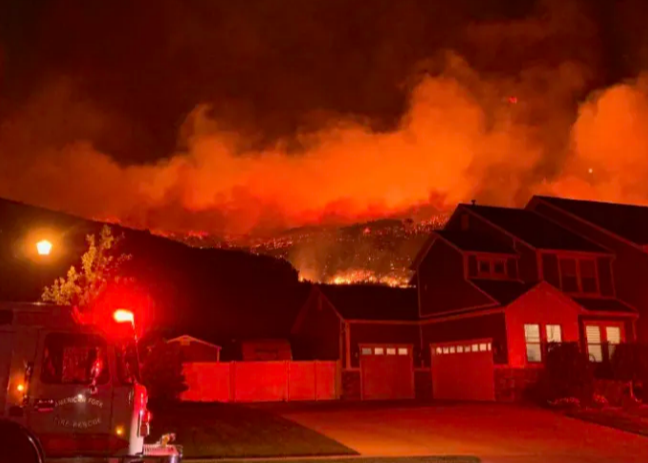 2020 brought more than its share of chaos and natural disasters, including hitting Lehi with the largest threat in decades on Saturday, June 27, with a fast-moving fire that engulfed the Traverse Mountain mountainside on a windy summer night. The blaze scorched nearly 500 acres.

The fire, named the Traverse Fire by state fire officials, started about 11:30 p.m. and came within a few feet of homes in Lehi’s northernmost neighborhoods. Residents within a quarter-mile radius of Vialetto Way to Annuvolto Way and residents on Autumn Hills Boulevard and Spring View Lane were all under evacuation notices through the night of the blaze.

The fire, started by five teenagers with a roman candle firework, was met with perfect conditions for a firestorm as winds exceeded 20 miles per hour on the dry mountainside. The fire rapidly moved toward homes, but it died down overnight as the winds slowed, and a slight rain moved in, according to Lehi Fire Chief Jeremy Craft.

The fire response required the assistance of fire protection agencies from all around the Wasatch Front. In total, multiple fire departments and over 200 resources, including helicopters, water tankers and bulldozers aided the effort. The fight lasted into Sunday (June 28) morning and was ultimately 100% contained by Monday afternoon, according to Chief Craft.

Five teen suspects were charged with crimes associated with starting the fire, but details of cases were unavailable since the boys were minors. The teens also faced the possibility of providing restitution for the firefighting cost, which Chief Craft said exponentially increased due to aerial support and fire-fighter overtime pay.

“That can easily total a million dollars,” said Craft.

In the aftermath of the fire, Lehi City has since executed flood and mudslide mitigation to the mountainside to prevent further damage to neighboring homes.