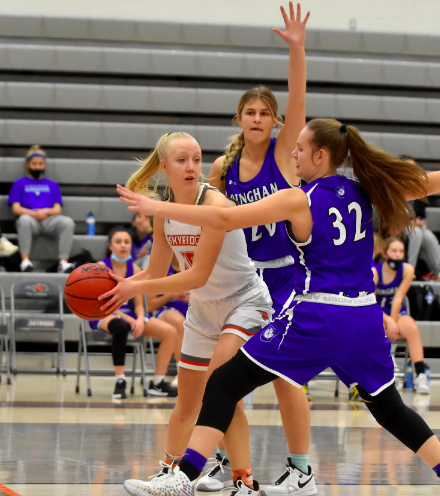 The Skyridge girls basketball team bowed to Bingham on Jan. 5 at home and then fell to Herriman on the road Jan. 8.

The Falcons struggled to find the hoop throughout the contest against another tall roster. The Miners led 16-9 after the first quarter and 33-17 at the break and never allowed Skyridge back into the game.

“Bingham is a tough team that defends well,” said Falcon Coach Shaylee Nielsen. “They held us to a really low shooting percentage which caused us to play a lot of transition defense.

“We were never able to really set up in our usual defense so we didn’t defend as well as we normally do,” she added. As a result, it hampers the team’s most effective offensive approach.

“Our game against Herriman was very similar,” Nielsen continued. “We are having a hard time scoring the ball, which is not allowing us to set up in our usual defense. We need to be more efficient on offense and find a way to get easier looks to get our confidence up in our shooting.”

Skyridge fell behind the Mustangs too, trailing 5-16 after the initial period and 18-41 at the break, which proved to be too big of a hole to climb out of.

“Herriman is a very talented team,” Nielsen said. “They have two Division I players and some great shooters. I’ve got to give them a lot of credit, they played well and didn’t allow us to do what we are good at.

“We played a really tough preseason schedule and I think it will really pay off for us going into region play,” the coach added. “We have learned a lot about ourselves and what we need to work on. Our girls are working hard and doing what they need to do to be ready for a tough region schedule.”