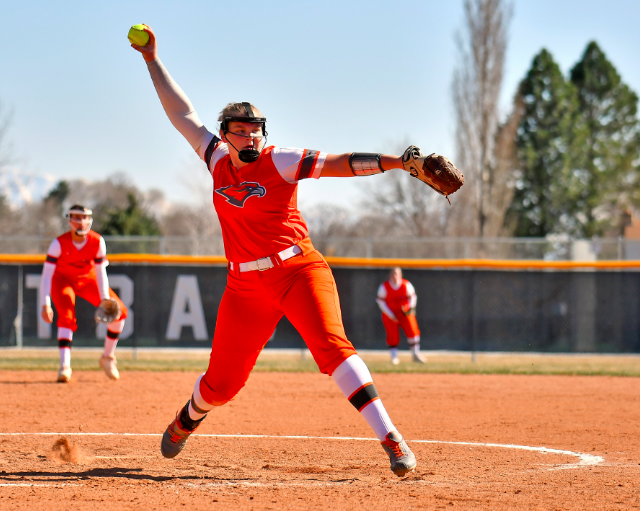 The Skyridge softball team overcame a loss to undefeated Spanish Fork on March 24 with four straight dominating wins. The Falcons rolled over Pleasant Grove on March 30, Westlake the next day and American Fork the day after that, finishing up on April 6 by shutting out Woods Cross.

The Falcons exploded for eight runs in each of the second and the third innings to end the contest early. Skyridge racked up 18 hits led by sophomore shortstop Moki Maughan, who went 4-for-4, scored three times and drove in two runs.

Freshman catcher Irma Medina was 3-for-4 including a triple. She scored three runs and had three RBI. Junior center fielder Brightyn Turner went 3-for-3 with a walk, providing an RBI and also crossing the plate three times.

Sophomore right fielder Elliot Plewe had a pair of hits including a double, scored twice and was responsible for three RBI. Sophomore third baseman Elizabeth Barnes also hit twice for three RBI and scored once.

A dominating performance from junior pitcher Heather Berrett helped pave the way for the Falcons in this one. She struck out 11 batters with just two walks and scattered four hits. The Thunder got a solo home run for their only score.

On the other side of the plate, the Skyridge batters made the most of nine hits. Medina, Berrett and Turner all homered, while Maughan and freshman first baseman Taya Tahbo both doubled. Each of them except Turner provided two RBI, while she got one on her solo shot. Plewe scored three times.

The slugfest with the Cavemen wasn’t decided until the final inning. Both teams were scoreless in the first, third and fourth, but the Falcons plated five runs in the top of the second and American Fork answered with eight runs in the bottom half.

That’s how the score stayed until the top of the fifth, when the Falcons squeezed in two runs, but the Cavemen also scored, keeping them in front 9-7. The tide turned in the top of the sixth when four runs pushed Skyridge ahead, but they still had to score in the seventh to close out the victory.

Kadynce Barnes had a stellar plate appearance, going a perfect 4-for-4 including a double, scoring three times and providing three RBI. Medina doubled twice among her four hits, had four RBI and crossed the plate twice herself. Turner had a pair of hits, two RBI and two runs scored.

The Wildcats got shelled for 15 runs in the second inning and didn’t help themselves with three errors in this blowout, which only lasted 2 ½ innings. Berrett threw a two-hitter to get the win.

Medina had three hits in three at-bats, all of them doubles, for four RBI and two runs scored to lead the offensive onslaught. Turner doubled twice for three RBI and also scored twice. Kadynce Barnes drove in three runs with two hits including a double and made two runs herself.