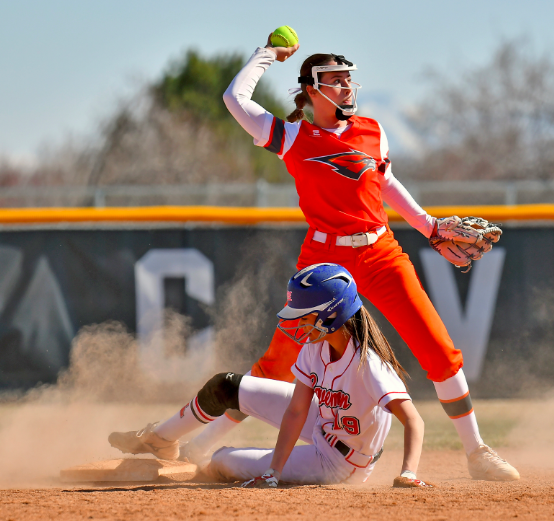 The Skyridge softball team has a two-game lead in the Region 4 standings after posting seven victories in a row in conference play. The Falcons have an 11-6 record overall. Here are some highlights from the games of the past couple of weeks.

The Falcons jumped out early with four runs in the bottom of the first inning and they never looked back as they went on to post 11 hits and give up just four on the way to a shutout win.

A stellar performance from junior pitcher Heather Berrett set the table for the Falcons. She went the distance, scattering five hits with 14 strikeouts and four walks and gave up just a single run in the sixth inning. She also helped herself with a three-run double.

The Falcons made all of their runs in the first two innings and then just held on for the victory. Berrett had 12 strikeouts against a single walk in this circle outing.

Plewe hit a grand slam in this game and finished with two hits and five RBI to provide the winning margin herself. Maughan, Medina and sophomore second baseman Grace Beck each had two hits in the contest and Medina drove in the other run.

The game with the Vikings started out close, but the Falcons plated seven runs in the third inning to take control for good. The visitors got their only score with a home run.

Tahbo, Plewe and Kadynce Barnes all homered in this game, while Medina had a double. Maughan, Medina, Kadynce Barnes and Elizabeth Barnes drove in a pair of runs apiece for the victors.

Uncharacteristic fielding errors proved costly in this game, the first of four in a day-long round robin. Junior center fielder Brightyn Turner drove in the only run for the Falcons.

The Falcons rallied for five runs in the bottom of the seventh, but it wasn’t quite enough to overcome the earlier deficit. Maughan went 3-for-4 with a pair of RBI and a run scored to lead the attack. Plewe and Kadynce Barnes each drove in two more runs.

The Falcons only gave up one run at a time in this contest, but seven errors didn’t help their cause  and they weren’t able to get the hits they needed when they managed to get runners on base. Beck had two of the five hits and Maughan was the only person who scored.

Wrapping up the improving trend of a long day, the Falcons cranked out 17 hits against the Bees. Skyridge posted 11 runs in the third inning to take control of what had been a close game for good.