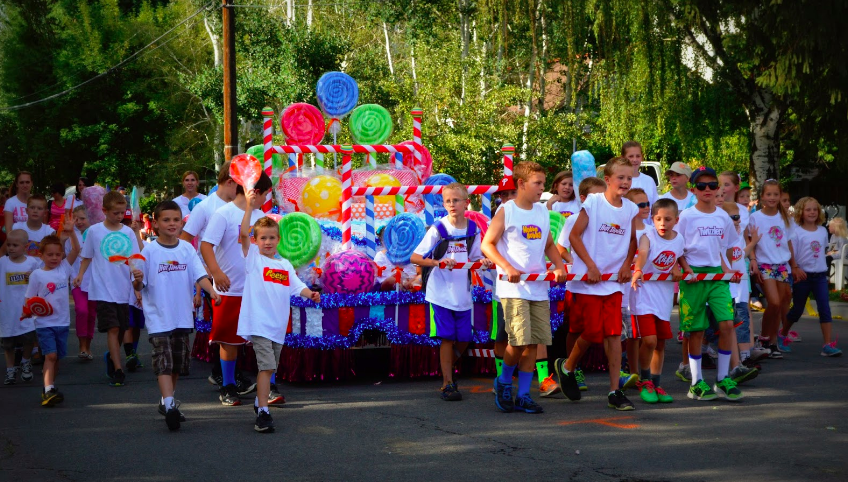 On a late night in May 1970, two Lehi women headed for Broadbent’s barn to work on a float for the business. Unfortunately, one of the women stumbled and fell in an irrigation ditch on the property. Her friend pulled her up, and they sat and laughed about the misadventure but were certainly not deterred in their efforts to build the float. Float building was a work of love, dedication, and tradition that many in the community looked forward to each year during the Lehi Round-up celebration.

The miniature float tradition started during the 1938 and 1939 Lehi Community Day. The Lions Club spearheaded the celebration. The day-long event featured about 150 miniature floats built by local wards of the Church of Jesus Christ of Latter-day Saints. At that time, each ward made a small float. They were simple but memorable. One young Lehi boy remembers riding on a small platform in a tin tub filled with balloons.

The Lehi Civic Improvement Association was organized in 1940 with Alva Wing, president; Thomas Powers, vice president, J. Ferrin Gurney, secretary/treasurer; George A. Lewis, Roy A. West and Daryl Fowler were directors. This organization has sponsored the Lehi Round-up Days ever since. The miniature parade was and still is an important part of the annual celebration.

Miniature floats became the staple of the parades held Friday night and Saturday morning on the last weekend in June. Months were spent planning, creating and building the imaginative floats. The rules were very specific. The float must be no more than 8 feet high, 10 feet long and 8 feet wide. Floats became works of art, and groups would compete each year to see who could win the coveted sweepstakes award.

Whitney Pulham, a member of this year’s parade committee, expressed frustration that the old enthusiasm for the miniature float tradition has waned in recent years. “It is just getting harder and harder to find volunteers to build the floats. However, old-timers still love to maintain the tradition of miniature floats and still commit hours to building them.”  Asked why she still is involved in the arduous task of making the parade memorable, she said, “I am fighting for tradition. I loved making floats and riding on floats and want my children to have the same experience.”

Pulham explained that the Round-up Rodeo Committee (C.I.A.) gives each ward that participates in the float building $600 to use for materials. Many also use their own resources to make the floats outstanding. “The $600 comes from the revenue generated at the concession stands during the Round-up rodeo,” said Pulham.

Lehi City conducts workshops each year to instruct float builders on the rules and requirements for building a miniature float for the parade. The instructions are vital in giving participants the detailed information needed to create a float for the organization they represent.

Lehi is famous for its miniature parade and the floats that bring joy and delight to all who line the streets during the celebration. For years, Lehi residents who have lived in the community know the joys of being part of this endeavor. Lehi City officials and the Round-up Rodeo committee hope that miniature floats will continue to be an important part of Lehi’s annual Lehi Round-up Days.