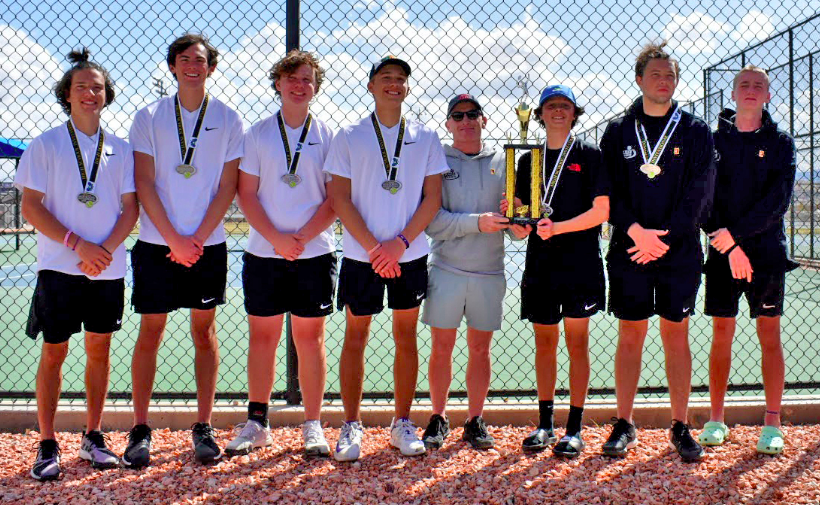 The Lehi boys tennis team wrapped up a fine regular season by qualifying players in four of the five brackets at the 5A state championship meet, played at the Liberty Park Tennis Courts in Salt Lake City on May 20 and 22.

The Pioneers did not go down without a fight, but ultimately all of the Lehi entrants were eliminated in the first round.

Also coming in as Region 7 #2 were juniors Brevan Francom and Will Worsley (9-3), who represented the Pioneers in No. 1 doubles against a pair of seniors from Region 6 #3, Milo Headden and Oscar Smith (5-2) of Olympus.

The Dons won the first set 6-4 but the Pioneers took the second set 6-3. The final round was a barnburner, but the Spanish Fork entrants hung on to win 7-6 (2).

Skyline easily captured the 5A title with 26 points. The highest Region 7 placer was Orem, which finished fourth.

“I am happy with the season we had,” said Coach Alan Wofford. “When we competed at region, every player’s results exceeded his seed, which rarely happens.

“Also, we won the tournament in St. George, which was a huge accomplishment,” he continued. “In addition, we defeated teams that we haven’t beaten in several seasons. After Spring Break, we got on a roll and won six out of eight matches.

“As you can see, we have much to be proud of, and I am,” Wofford said. “I love this team, especially their dedication and resiliency. It was a great season with a great group of young men.

“I am so proud to coach Lehi tennis,” he concluded.