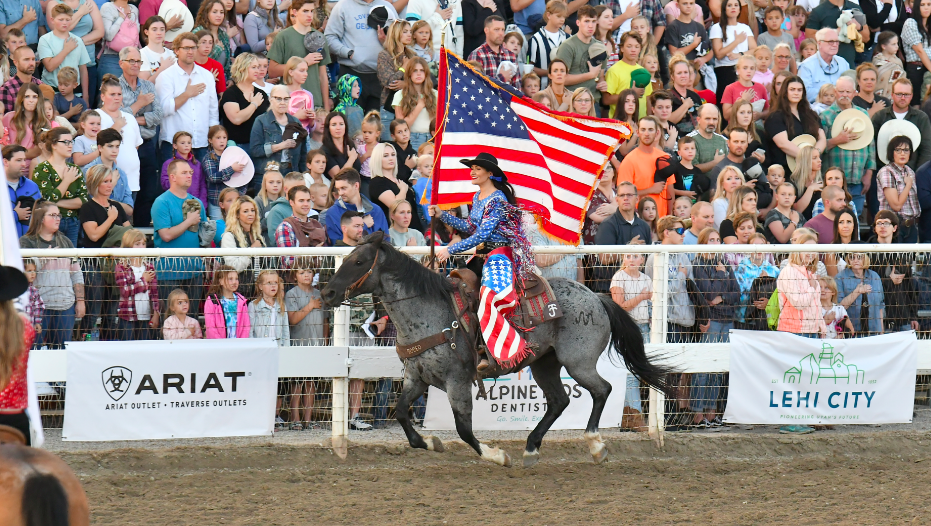 Everyone was excited to be back to the arena after a one-year hiatus due to the COVID-19 cancellation. Traditions of the past were honored, and especially fitting was a tribute to the late Lecile Harris, Lehi Round-up clown for the last 29 years. Thursday night’s grand entry was a spectacle to behold, with rodeo queens from around the state thrilling the crowd as they raced around the arena and lined up as the Star-Spangled Banner was sung. Each night brought roars from the crowd at the introduction of the flag and a moving tribute to America by the announcer, Andy Stewart.

One family, the Risenmays, were visiting from North Carolina and are new to the rodeo. They commented how impressed they were with homage paid to the flag and our country but were especially impressed that the event began with a prayer. “This would never have happened back in North Carolina,” said Mrs. Risenmay.

Comments from the fans and the participants were varied and positive. Bryce Gardner, a calf roper, said, “This is the best rodeo around.” Three young fans, Tucker, Taiten and Jaigen, all said how awesome the rodeo was, “these are the most fun days we have all year.” Corbin, Travis, Sam, and Cam mentioned the new clown, “he is funny, but no one can beat Lecile.”

On a somber note, Ron Smith, a longtime member of the Civic Improvement Association, said he would be retiring this year as head of the contestant parking committee. He began his service 28 years ago. Smith remembers picking Lecile up from the airport two years ago, and the clown quipped, “you can’t retire until I do.” Smith said, “I guess it is my time to retire too. I have seen the contestant parking go from one lot to three. We have a lot of great participants from all over the country.” Mike Russon will take over Smith’s responsibilities.

All the events were exciting and kept the audience on the edge of their seats. The Lehi Round-up has a purse for event winners of over $60,000.The saddle bronc riding was dominated by the legendary Wright family from Milford, Utah. Ryder Wright won the contest with a score of 87.5. His brother Stetson came in second with an 82 score. Ryder received $1,822 for his record-setting ride. Wright also came in second in bull riding with a score of 85.5. Tim Bingham won first place with a score of 86. Bingham received $1,936 for his effort.

“The One-Armed Bandit” specialty act provided a unique and impressive exhibition from horse trainer John Payne, who literally rounded up three horses and a zebra and had them climb to the top of the horse trailer with one arm and a whip. The crowd cheered as the animals obeyed Payne’s commands.

Probably the biggest thrill of the rodeo was the final event–the high-flying antics of two motocross performers, world-renown Brody Wilson and Ogden sensation Allen Dixon. The bikers turned somersaults in the air, barely hanging on their cycles as they launched themselves high above the arena, landing on the inflated landing platform. The audience gasped as the pair stunned the crowd with their gravity-defying stunts.

The 83-year-old Lehi Round-Up Rodeo is one of the oldest rodeos in the nation. The yearly event has seen many changes over the years and is a work of service and devotion by Civic Improvement Association members. The current committee, Stan and Angie Lewis, Mike and Becky Southwick, Cal and Trudy Jacklin, John and Lacey Lewis, Shane and Cali Southwick, Drew and Teisha Wilson, Jared and Susan Peterson, Mark and Shanalyn Coddington, Lec and Kim Holmes, Robert and Cindy Allred, and Brad and Kyleen Erekson wish to thank the many volunteers who handle the gates, the concession booths, help park cars and do so much behind the scenes, along with Lehi City, to support the beloved endeavor each year.