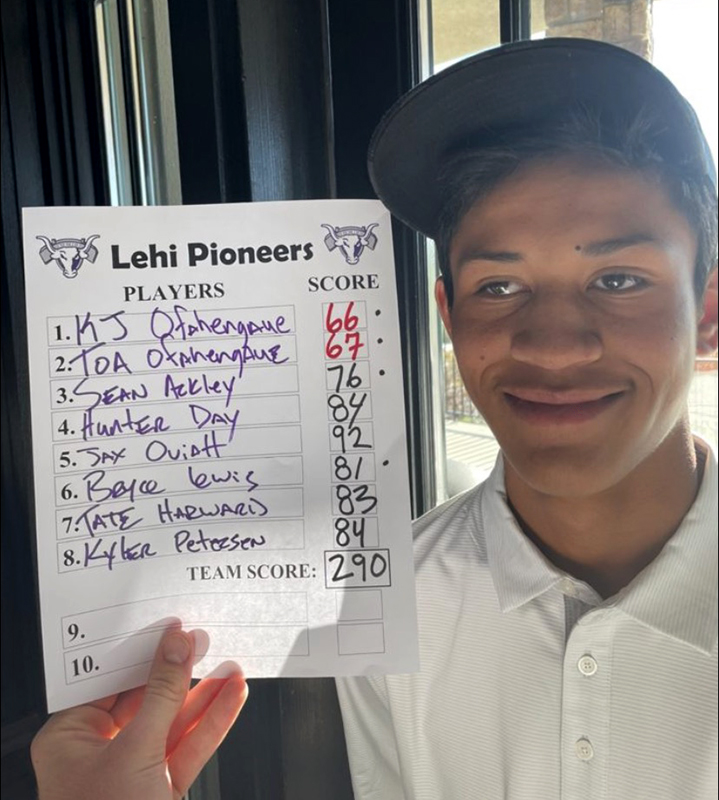 The Lehi High School boys golf team has already built a commanding lead in the Region 8 competition after the first four meets of the season.

The Pioneers opened their campaign with a 287 combined team score, outdistancing second-place Alta at 310 by 23 strokes.Orem finished third with 312.

Freshman Toa Ofahengaue started his high school career with a bang, shooting a one-under 71 and besting his older brothers Helaman and KJ, along with teammate Sean Ackley, who all posted an even-par 72 for the day and accounted for the other contributing team scores.

Lehi posted the best team round of the year to date with a 278, besting Orem at 295 and Alta at 296.Toa once again set the pace as he shot a sterling 67. KJ and Helaman came in at 70 and Ackley posted a 71. Day, Oviatt, Bryce Lewis and Dallin McKay also participated.

This was the closest competition so far this season, but the Pioneers still won comfortably with a 290 combined score, seven strokes up on Alta at 297.

KJ led the Pioneer effort this time with a 71, edging Toa and Helaman at 72. Day contributed the final score for the team tally with a 75. Oviatt, Ackley, Harward and Lewis were on hand as well.

Lehi made the most of a blustery outing, again posting a 290. The teams from Orem and Alta tied at 315, 25 strokes behind the leader.

KJ turned in Lehi’s best round of the year to date with a 66, just edging his brother Toa at 67. Ackley shot a 76 and Lewis rounded out the counted scores with an 81. Harward, Day, Kyler Petersen and Oviatt also competed for the Pioneers.