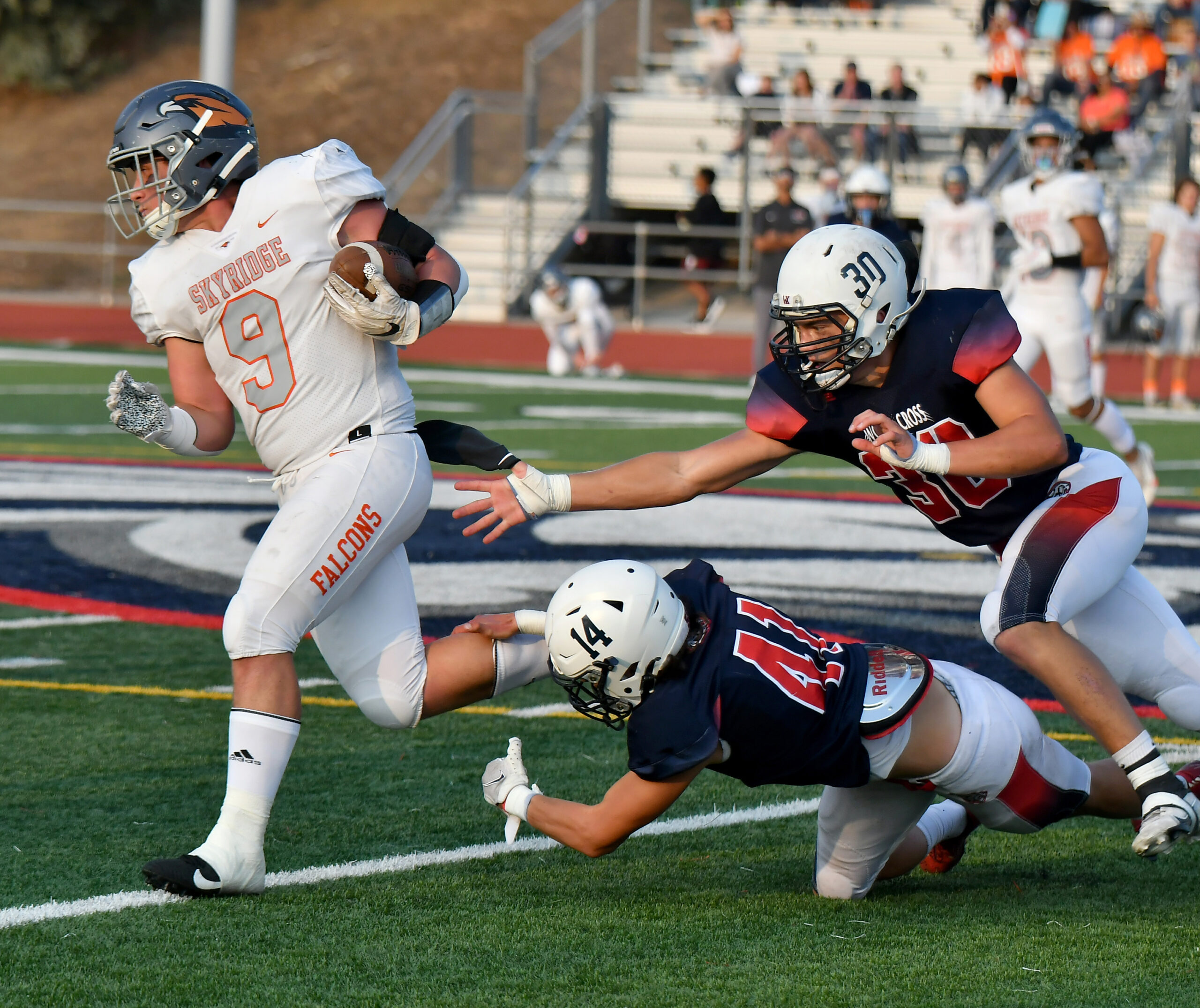 The Skyridge football team came out strong and dominated the Wildcats from the first moments of the game on Aug. 20, rolling to a 49-0 victory on the road.

The resiliency of the Falcons was evident as they overcame a pregame obstacle as Head Coach Jon Lehman was notified of a one-game suspension due to an athlete transfer violation shortly before the team loaded the bus and headed north for the game.

The suspension of Lehman ignited a spark in the Falcons as they played aggressively and executed seamlessly throughout the night.

Other scorers were senior running back Jeter Fenton with the first touchdown of the game on a seven-yard run. Junior runningback Tate Walker scored two touchdowns, one early in the first quarter with a three-yard run and an eight-yard run in the third period.

Sophomore running back Carter Sheffield scored the final touchdown early in the fourth quarter with a five-yard run.

Safeties Coach Patrick Gleaves said, “The team effort was excellent tonight and the team played hard. An unexpected challenge happened to the team before we got on the buses to drive here. No one knew that Coach Lehman wouldn’t be able to be here.

“The coaching staff also stepped up tonight and did what they had to do. This game was a testament to the program that Coach Lehman has created,“ Gleaves said.

Walker said, “It was a good game. Our offense and line had a good push all night. It was just a good team win. We played physical and as a team. We dominated Woods Cross and we were a way stronger team tonight and they could not stop us.”

An even more impressive performance was posted by the Falcon defense. Junior safety Dalton Young led the squad with eight tackles, including six solo and one for a loss.

“We prepared hard all week and they executed the game plan well. This team is awesome. The defense was great and played hard. It was a real team effort,” said Gleaves.

Young said, “I think we played really well. We executed our defensive plan, got a shutout and our offense did their thing as well.”

Young showed a lot of range throughout the game, making tackles from sideline to sideline. “They were a run team, so I was basically reading run and got caught on a pass one time, but I was coming downhill hard just trying to make the tackles for the team,” said Young.

The Falcons will visit Herriman on Friday (Aug. 27) with kickoff scheduled for 7 p.m.