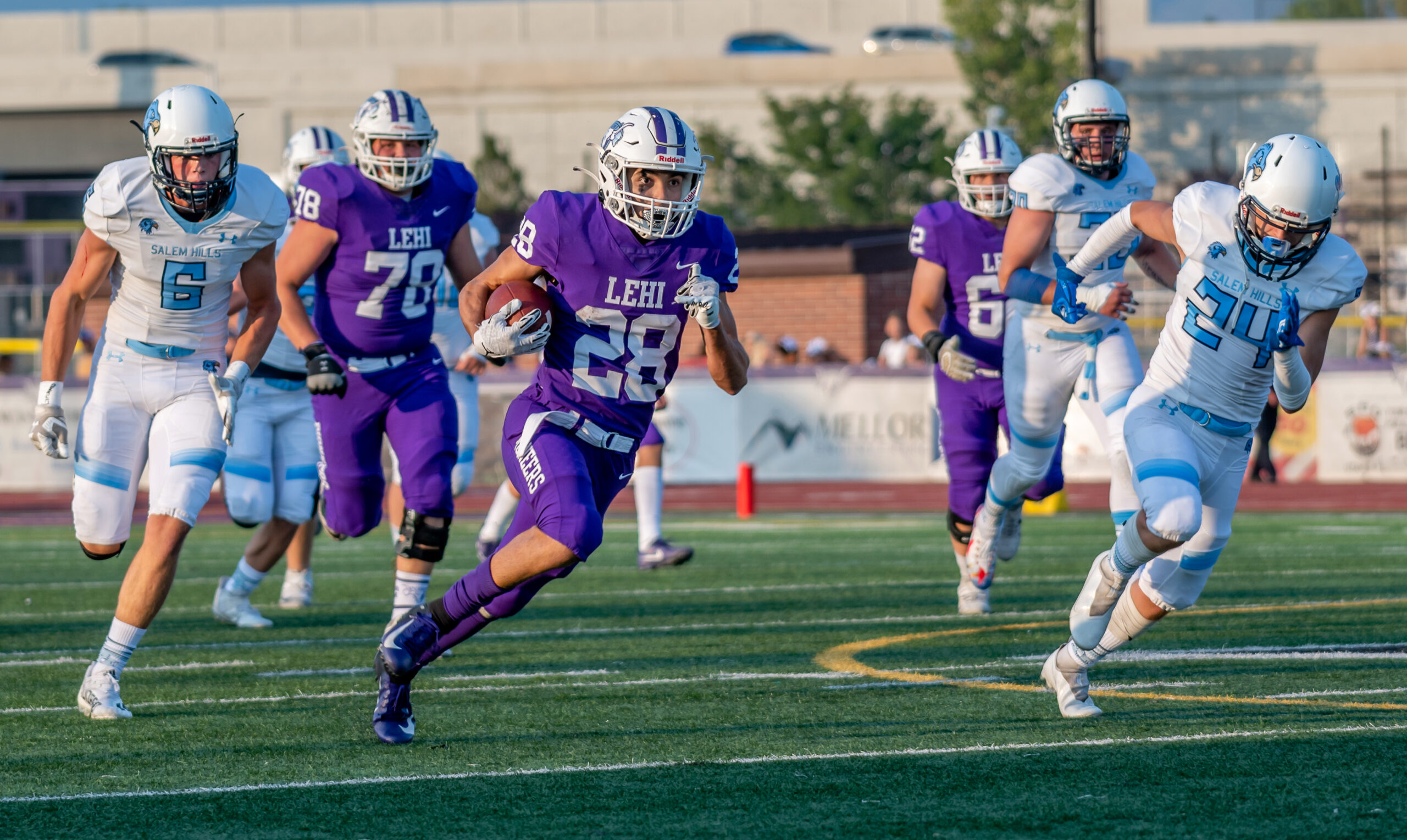 The Lehi High School football team took a while to get going, but then scored 30 unanswered points to top Salem Hills 30-7 on Aug. 20.

The game was scoreless until midway through the second quarter. Starting just shy of midfield, junior quarterback Jackson Brousseau found junior tight end Boston Bingham for a first down.

Two plays later, junior running back Carson Gonzalez broke free for a 45-yard touchdown run. The PAT was blocked, so the Pioneers posted a 6-0 advantage with 5:59 left in the half.

The Lehi defense held on the next Skyhawk possession, so the Pioneers got the ball right back with another short field. A 30-yard catch by sophomore Loki Latu pushed the offense to the red zone, but Lehi had to settle for a 30-yard field goal by senior kicker Zane Goodrich with 1:36 remaining.

Salem Hills stumbled during the first possession of the third period and punted away. Junior Kadiyon Sweat busted a nice return and the Pioneers were in business again at the Skyhawk 40-yard line.

Brousseau connected with senior wide receiver Helaman Ofahengaue for a 20-yard gain. Christensen later capitalized with a 17-yard touchdown reception at the 8:01 mark. The Goodrich PAT made it 16-0.

Just 1:12 later, Sweat broke through the line and made a catch resulting in a 65-yard scoring play. The PAT pushed the advantage to 23-0. Sweat added the final Pioneer touchdown with a 2-yard run at the 10:28 mark of the fourth quarter.

Salem Hills avoided a shutout with a touchdown in the final minute against the JV defense.

“We still have quite a bit to do to improve on offense and some of that’s on me,” said Lehi Coach Ed Larson. “I need to work on my game plans and putting kids in the right positions for success. However, I was pleased that the kids did overcome some obstacles in this game.“

Brousseau had a superlative outing, converting 16-of-19 (84%) for 223 yards and two touchdowns with no interceptions, yielding an exceptional QB rating of 156.3.

The numbers for Gonzalez were also in the stratosphere. He rushed 20 times for 171 yards and one score and also had four receptions for 24 yards, making 195 yards total. Christensen had five catches for 57 yards and one TD and Sweat had 121 all-purpose yards.

“Our offensive line is still a work in progress,” the coach continued. “We’re still looking for the kind of protection we want for Jackson. He’s coming along well but needs to release the ball a little faster.”

Larson was happy with the execution in some other parts of the contest. “Our defense has played outstanding both weeks,” he said.

“It got a little sloppy at the end with the JV kids allowing a score, but the game was already well out of reach. We dideliminate the special teams mistakes that cost us at Davis,” he added.

Junior defensive end Isaac Terrell had three solo and four assisted tackles, including two sacks for a combined loss of 19 yards along with three hurries. Junior linebacker Blake Jenkins also had his name called often, with a combined nine tackles including two for a loss. Royce added seven tackles.

Sweat had the game’s only interception. Junior defensive back Bowen Ingersoll was responsible for three pass deflections and senior defensive tackle Kimball Tamala caused a fumble.

The Pioneers head to Idaho this weekend to play at Coeur d’Alene. “They reached the state semifinals last year and were ranked fourth in the preseason in 5A, the highest level there,” Larson said. “The Idaho coaches I’ve talked to say they have a good staff, and they play hard.

“We expect to see some tough-nosed football players,” the coach added. “It will be fun for our kids to play in the atmosphere of a one-high-school town with a chip on their shoulders.”

The contest is scheduled for kickoff Saturday (Aug. 28) at 11 a.m