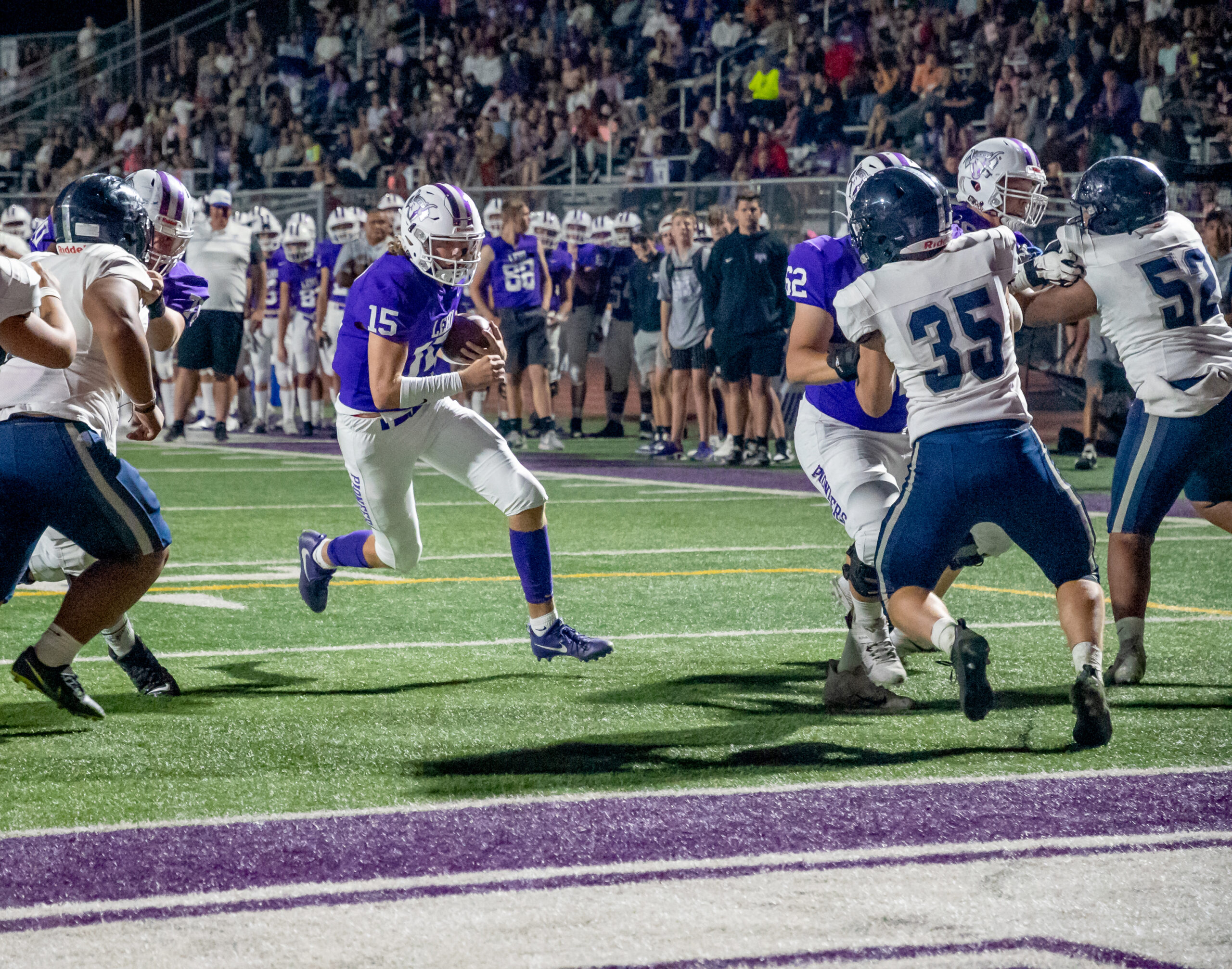 The Pioneers scored three touchdowns in the first quarter and never looked back as they overwhelmed the Grizzlies 49-12 at home on Sept. 3.

The Lehi defense yielded nothing to the visitors on their first three possessions and actually put them in negative yardage positions each time, so the Pioneers ended up with three short fields in a row and took advantage of all of them.

The first Lehi drive started at the Pioneer 38. The team marched relentlessly toward the target with the key play being a 26-yard pass from junior quarterback Jackson Brousseau to junior Carson Gonzalez to push the ball inside the 10-yard line.

Gonzalez completed the series with a 4-yard run and senior kicker Zane Goodrich nailed the PAT to give the home squad a 7-0 advantage at the 6:12 mark of the first quarter.

The next Lehi possession started at the Copper Hills 42 after a poor punt. A 28-yard reception by junior tight end Jace McGarygot the ball to the 12 and junior tight end Koby Moore caught the next pass in the end zone for the second score with 1:49 left in the period.

The third series started at the Grizzly 31-yard line and Brousseau simply tossed to Gonzalez from there. The Goodrich PAT made it 21-0 with just under seven seconds remaining.

The visitors finally got the ball moving in the second quarter and managed to score at the 6:31 mark with the help of some Pioneer penalties. Their extra-point try was blocked, leaving the score at 21-6.

With 39 seconds on the clock, Brousseau connected with senior wide receiver Jaxon Christensen for a 21-yard touchdown to make it 28-6 at the break.

Lehi quickly padded the lead with two touchdowns early in the third quarter. The always-dangerous junior Kadiyon Sweat returned a kick 87 yards for the first score, and Brousseau ran the ball in from two yards out for the second to make it 42-6with nine minutes still on the clock.

Copper Hills found the end zone once more in the fourth quarter,but the attempted conversion run was stopped. In the final minute, sophomore running back Kolose Latu broke free for a 40-yard run to finish the tally for the evening following a PAT by junior Jacob Price.

“I thought for the most part we played the way I thought we would,” said Lehi Coach Ed Larson. “We knew Copper Hills was struggling but we didn’t overlook them. I felt really goodabout that part.

“We took the opening drive and scored, something we hadn’t done all year,” he continued. “There was a cohesiveness to what we were doing and I’m feeling better and better in that respect.

“We had a lag defensively and offensively in the second quarter,” the coach said. “Our defense was stalwart but could have been a bit better. This is a teaching week and hopefully we’ll learn from it.

“I’m proud of what our defensive tackles are doing,” Larson went on. “Kimball Tamala and Helaman Ofahengaue had really good games. Of course, Isaac Terrell does every week; he’s our standard.”

The coach added that the offensive line still has a ways to go but was a little better in the protection this time.

The narrative will definitely be a bit different this week as the Pioneers will host defending 6A state champion Corner Canyon on Friday (Sept. 10) at 7 p.m. The Chargers own the top ranking in the state again this season and finished at No. 9 nationally last year.

“You don’t get an opportunity like this very often,” Larson said. “As a player, you’re going to be able to tell your posterity you played the best in the state. The only question is, what will the rest of the story be?

“We have to come prepared,” he added. “How well we respond will give us a great measure of ourselves. They’ve set the standard in the state that everyone wants to reach.”