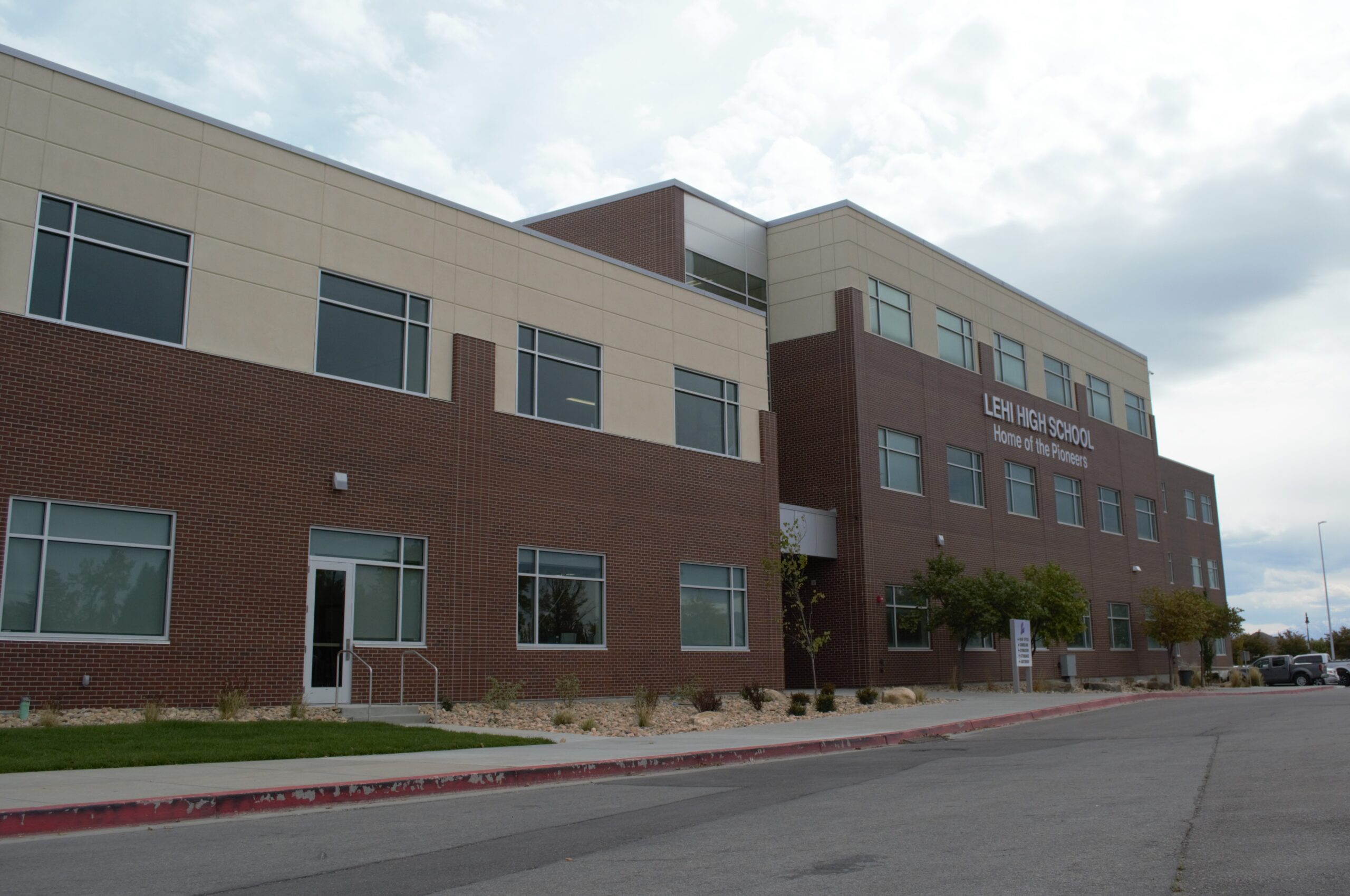 After three solid years of construction, the Lehi High School rebuild is complete. Every bit of the 100-year-old school is new, but the school remains in the same location next to the Lehi Roller Mill off Main Street.

“I’m happy we could keep the school on the same grounds where it has always been. This is a landmark. It’s the best thing that could have happened,” said Phil Clark, assistant principal and former teacher at LHS.

A section of the old gym floor with “Lehi” in bold, purple caps,has been repurposed as a conference table in the administrative offices. “This is right where the teams used to sit on the baseline,” Clark explained.

Most of the new square footage at Lehi High School is in threenew gyms, the auditorium and performing arts wing, the lunchroom and common areas. The layout of the athletic area outside was adjusted so all the fields and tennis courts are in the same place.

Construction began on the new high school about five years ago,but stalled just after Skyridge High School opened in 2016. The last three years, though, have been nonstop construction. The building was staggered so that no single class had to spend their entire three years of high school in an incomplete building.

“We’re going to fill up the building at some point, but right now we’ve got extra space and it feels good,” Clark said.

Classrooms at LHS got serious upgrades with state-of-the-art sound systems and mounted projectors standard in each room. Details like LED lights instead of the old halogen lights are a luxury teachers and coaches get to enjoy. Although no high school ever has enough parking, LHS has more stalls than they’ve ever had before.

For a long stretch, there was no lunchroom at Lehi High School. Most students go off campus for lunch anyway, which makes the lines at the cafeteria go quickly. Nutrition specialists get to work with restaurant-quality kitchen equipment now. Teachers and administrative staff pitch in to clean up after the lunch rush while students linger in the wide-open common area.

“The architects were very thoughtful in the details – they did a really great job,” said Clark. The open spaces where students can gather was a top priority. “They love having space to congregate and hang out. It’s good for them.”

The award-winning band and the orchestra at LHS endured being cramped in a few small classrooms during the construction years. “We don’t talk about that,” laughed Brian Parker, LHS band and orchestra teacher. “It’s so much better now. The morale has been great now that they have a place to call home.”

Drama teacher Mindy Nelson gave input on the new auditorium, insisting on a real shop behind the stage where they can build and store sets. She also suggested self-closing plywood for the stage floor, similar to professional theaters because it is stronger and safer than alternatives. “I had them take out a few seats in the front to get the room we needed for the tech shop backstage. We have great technology here now. Students can go into any collegiate program, and they’ll know how to run it,” said Nelson.

Randy Blackburn, paint palette in hand and a huge smile on his face, worked contentedly painting in the tech shop. “I can have all my backdrops loaded at the same time and lower them when we need them. It’s great.” Blackburn has famously transformed the LHS stage with his set designs for years.

“Performing arts probably benefitted the most with this rebuild. So much of what they do is in a classroom, and they were getting shuffled around. Most of the sports could be outside and we always had a gym, too,” said Clark.